Socialism is shaping up to be 2020’s hot-button issue. Proclaimed socialists won big in 2018, notably congresspersons Alexandria Ocasio-Cortez and Julia Salazar in New York. Senator Bernie Sanders is again running for president on a democratic socialist platform. And a groundswell of support has raised membership in the Democratic Socialists of America from 7,000 to 50,000 in just two years.

The argument that will drown your social media is already taking shape: Will Americans allow the government takeover of the private sector or will it maintain the laissez-faire capitalism that was the country’s bedrock? (Yes, that’s a false choice, but we’re talking the internet during an approaching election year. Not reasonable choices.) 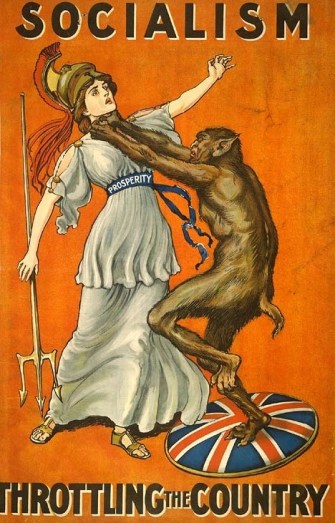 Last year, Gallup asked a random sample of Americans their understanding of the term “socialism.” Only 17 percent of respondents defined it as government ownership or control of businesses and the means of production. While this is the classic definition of the term, it was not the number one answer. It wasn’t even the second largest response — which was “no opinion,” an answer that suggests its own commentary.

For a larger portion of the population, socialism equates to equality, but what then does “equality” mean? That depended greatly on the individual wielding the term. According to the report’s authors, “The broad group of responses defining socialism as dealing with “equality” are quite varied — ranging from views that socialism means controls on incomes and wealth, to a more general conception of equality of opportunity, or equal status as citizens.”

And Democrats and Republicans aren’t just split on socialism definitionally. They are also split emotionally.

It’s worth noting that young voters have a much more favorable view of socialism than their older peers, especially those whose definition and emotional disposition would have ossified during the Cold War, when the term entered our cultural lexicon in force. 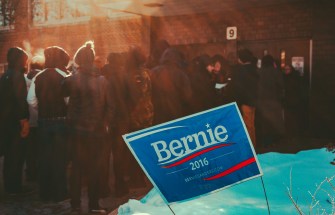 Bernie Sanders 2016 campaign didn’t make him President of the United States, but it did return socialism to the fore of American political discourse. But which version of “socialism” is the question. (Photo: Tony Webster/Flickr)

A self-described democratic socialist, Bernie Sanders may be more responsible for the term’s resuscitation in American discourse than any other political figure and its recent definitional shift.

Sander’s socialism is based squarely on New Deal politics and the Nordic Model. He supports a market economy alongside heavier taxation to support wider, sturdier public provisions. He specifically points to social services like education, childcare, and healthcare as rights in need of government protections and overreaching influence.

“I think that when we look at a modern, democratic, civilized society, you’re looking at economic rights in addition to political freedoms,” Sanders told MSNBC. “I happen to believe that in the year 2019, with all of the wealth around us, we can create an economy which guarantees health care to all people as a human right, which guarantees education as a right. Economic rights as human rights.”

Sanders does a decent job of defining his terms (for a politician, that is); however, his definition of “democratic socialist” does stand in opposition to its standard usage. Democratic socialism calls for a society in which the government owns the means of production and centrally plans the economy. It is classic socialism housed within a democratic framework.

What Sanders advocates for is traditionally labelled “social democracy,” a mixed economy system in which a capitalist market that works with a much larger, more robust social safety net and social risk sharing. (It’s all in the adjective.)

For Sanders, New Deal substance may be more important than any label. Fair enough. However, both the Foundation for Economic Education, a libertarian think tank, and Jacobin, a democratic socialist magazine, have made the distinction between “social democracy” and “democratic socialism” part of their platforms. As such, it may be a distinction we’ll want to keep around — not only to offer much needed clarity to American political discourse but also so these two organizations can finally agree on something. 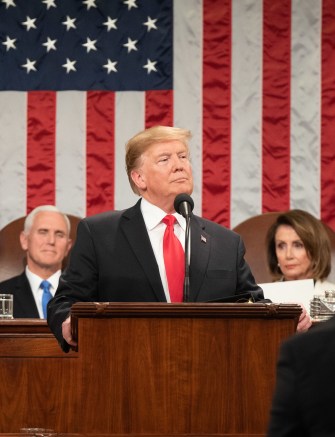 President Donald Trump during his 2019 State of the Union address, in which he denounced calls to adopt “socialism” in the United States. (Photo: Wikimedia Commons)

Sanders may have brought socialism back into the political fore, but as we saw with Gallup’s poll, it has expanded beyond both its original definition and his New Deal outlook. For many it has become synonymous with equality, and we can see in the rhetoric of Alexandria Ocasio-Cortez.

Ocasio-Cortez’s democratic socialism is a bit of a moving target, and she admits the term houses varying definitions. Sometimes, she identifies it with the Nordic Model. Other times she promotes it as a type of economic democracy. Still other times, it’s incredibly broad:

For the love of capital is the root of all evil. She goes on to say that socialism shouldn’t be the fear that government will take over our businesses. It is a bid to equalize the playing field to prevent corporations from taking over our government — suggesting that her definition really falls in line with the equality response in the Gallup poll.

In opposition to Ocasio-Cortez, we have President Trump’s use of the socialism. Recently, Trump has tied the word strongly to Venezuela‘s mismanaged economy. In this way he attacks Sanders and Ocasio-Cortez’s view, but ignores the social democracies they draw inspiration from. You know, the countries that haven’t mismanage their economies with squandered oil money and a tinpot dictator.

“Virtually everywhere socialism or communism has been tried, it has produced suffering, corruption, and decay,” Trump told the United Nations General Assembly. “Socialism’s thirst for power leads to expansion, incursion, and oppression. All nations of the world should resist socialism and the misery that it brings to everyone.”

In a report discussing the misery and oppression of socialism, Trump’s economic advisers clump under the same definitional umbrella the failed mixed economy of Venezuela today with past communist economies like those of the USSR and Maoist China. When discussing the Nordic countries, however, the report argues that they “differ significantly from what economists have in mind when they think of socialism.”

So, Trump’s use of the word not only hearkens back to the classical definition but also sets aside any post-1949 renovations.

Political outrage: Why all sides get it wrong about the arc of …

Much to the exasperation of sticklers and pedants everywhere, words change meaning. It’s a natural, unavoidable part of our language, and socialism is a word undergoing such an evolution. Of course, we’ve been here before.

As linguist John McWhorter notes: “[I]deological positions are mostly fixed but the labels that are affixed to them are subject to change. People can make up a new word, or use an old one in a new way, at any time. However, the things that these words describe often change more slowly, and lend a new word their overtones despite hopes that a new coinage could avoid or transform them.”

Come 2020, whenever we hear a politician speak, we should consider whether they are clearly defining the term, distinguishing between its many variables, or simply using socialism as a political Rorschach test. When we have a discussion online, we need consider whether the “socialism” they use is the same we have in our personal lexicon.

The poisoned candy legend is just one way that American fears manifested: as an easily understood threat to innocence.
The Past

69 percent of the global diet is "foreign," says a study that pinpoints the origin of 151 food crops.
The Past

The findings at L’Anse aux Meadows mark the the earliest known year by which human migration had encircled the planet.
Thinking

If you see a political movement embodying all of these traits, watch out.
Up Next
Neuropsych

Adults who exercise are less inclined to be depressed, say Oxford and Yale researchers

But we already knew that, didn't we?