That’s the rosy narrative anyway. In truth, GDP measures the average of per capita output in an economy overall, but tells us little about the prosperity of individual citizens.

For example, GDP can increase in tandem with income inequality. Social mobility can be quashed even within a prosperous economy. Corruption can take root in rich countries. And production measurements can ignore consequences such as environment degradation.

Some economists argue that our love affair with GDP needs to end and be replaced with more robust economic measurements. As Nobel Prize laureate Michael Spence told The Atlantic:

“Many of us think we would benefit from a multi-dimensional approach that captures things people care about. Missing from [economic] growth are many things: health, distributional aspects of growth patterns, sense of security, freedoms of various kinds, leisure broadly defined, and more.”

New Zealand’s Prime Minister Jacinda Ardern has taken up that call. Last month the island nation unveiled its new well-being budget, a policy designed to put the health and happiness of its citizens at the economic fore. 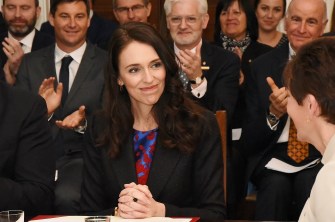 Happiness as a benchmark of success

New Zealand’s new economic policy will shift away from growth and production as a measure of economic success. As noted in New York Times, its new focus will be on “goals like community and cultural connection and equity in well-being across generations.” While other countries have reconsidered traditional economic metrics, New Zealand is the first to initiate such a wellbeing-guided policy.

“This is not woolly, it’s critical,” Ardern said at the World Economic Forum’s 2019 meeting in Davos. “This is how we bring meaning and results for the people who vote for us. It’s not ideological either. It’s about finally saying this how [sic] we meet expectations and try and build trust back into our institutions again, no matter where we are in the world.”

The new policy has earmarked nearly NZ$2 billion for mental health services. (New Zealand has one of the highest teen and young adult suicide rates among Western democracies.) Resources have also been designated for child poverty and long-term shelter for the homeless, more than NZ$1 billion and NZ$200 million respectively.

Of course, not every New Zealander is onboard with the budget’s new direction. “New Zealanders won’t benefit from a government that is ignoring the slowing economy and focusing instead on branding,” Amy Adams, a lawmaker in the opposition National Party, said in a statement to the Times. “We’re facing significant economic risks over coming years, but this government is focusing on a marketing campaign.”

As noted by the World Economic Forum, it will take years for New Zealand to refine its goals and then quantify the results, but other countries’ well-being experiments will help us gather data in the meantime.

The United Arab Emirates employs a Minister of State for Happiness and a National Program for Happiness and Well-Being. The program sets benchmarks for happiness and fosters conditions of well-being that allow employees to thrive within the country’s economy.

Neither country has budgeted for well-being as New Zealand has, and they still use the GDP growth standard. But both have supplemented traditional economics with more purposeful economic thinking.

Capitalism: the root of all happiness

Can a more purposeful capitalism take root in the United States and other Western democracies? That answer will depend on a whole host of variables, among them New Zealand’s successes and failures. However, there are already calls for similar changes to take place stateside.

In his book The War on Normal People, Democratic presidential candidate Andrew Yang laid the foundation for what he calls “human-centered capitalism.” Yang wants to establish a universal basic income that gives Americans over the age of 18 $1,000 a month, no strings attached. Yang’s so-called “freedom dividend” is the centerpiece of his policy, but his aim is wider is scope. He wants the market to support human experiences it previously undervalued, such as the arts, parenting, teaching, the environment, community connections, and disenfranchised groups.

“We must make the market serve humanity rather than have humanity continue to serve the market. We must simultaneously become more dynamic and more empathetic as a society,” Yang writes.

Similarly, the Green New Deal supports a multiplex of ideas that would feel at home with a wellbeing-based capitalism. To name a few: universal health care, a right to affordable housing, the restoration of Glass-Steagall, and debt relief for students and homeowners.

New Zealand is a small island nation — and so out of the way that it’s often forgotten by mapmakers. Yet, it could be the start of some big changes in how we measure progress and happiness.

Soviet researchers studied crime through a Marxist-Leninist lens. Under Lenin, a humanitarian approach to criminality briefly emerged, but dissipated when Stalin rose to power.
Up Next
The Present