A new Sesame Street show in Arabic is being launched by to help Syrian refugee children, but the benefits may reach beyond helping displaced kids learn their ABCs. 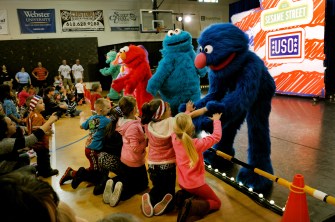 Earlier this month, Sesame Workshop (the educational nonprofit organization behind Sesame Street) and the International Rescue Committee (IRC) announced that they partnered up to launch a new program called “Ahlan Simsim,” or “Welcome Sesame” in Arabic. The show is aimed at providing early learning education to refugee children who are robbed of their education when displaced from their communities.

According to the IRC, nearly half of the 12 million people who have been displaced due to the ongoing civil war in Syria are children. Yet, according to IRC president and CEO David Miliband in an interview on 60 Minutes, less than 2 percent of all funding for humanitarian aid goes to education. 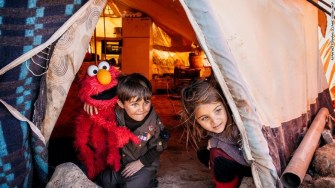 Ahlan Simsim, which was locally-produced, will be aimed at children ages 3–8 and, according to Sesame Workshop.

The show will include Arabic-speaking characters who are developed to “speak” to refugee children. For example, one of the main characters on the Arabic Sesame Street is Jad, a young muppet, is new to the neighborhood and it is implicated that he is a refugee. In a 60 Minutesclip from one of the episodes he says “My toy is not with me. I left it behind in my old home when I came here.” Additional characters include a muppet girl named Basma who befriends Jad, a baby goat named Ma’zooza that follows them around, and, of course, appearances by beloved classic Sesame Street characters such as Elmo, Cookie Monster, and Grover.

The tragedy of displacement, which lasts on average 20 years, is particularly traumatizing for young children who can’t fully grasp the situation they are caught in the middle of. This leaves violent cracks in the foundation of refugee children’s lives, many of whom have witnessed the violent deaths of loved ones. The first season of Ahlan Simsim will aim to help children develop social-emotional coping tools such as belly breathing and counting to five, according to executive producer Scott Cameron.

But, the impact of Ahlan Simsim will likely do more than teach children what Cameron calls “emotional ABCs.” Besides the trauma of an early childhood scarred by war violence, displaced children may experience social trauma in areas that they seek asylum. Daily stressors such as acculturation, economic insecurity, community violence, and stigma against refugees can be detrimental to child development and adjustment in a new community. Because children learn to understand themselves through a social lens, it’s important to see images, characters, and role models in the media that are representative of one’s experience and identity group.

Lack of representation can compound the isolation and identity disruption that displaced children experience. Not only have they been physically torn from their homes and communities, but they find themselves in situations where they perceive themselves as “different.” By representing disadvantage, displaced children, Ahlan Simsim may help refugee children feel that they belong in their community, and inspire feelings of confidence and security. Additionally, Ahlan Simsim helps to abolish harmful stereotypes against refugee populations by portraying them in a positive light as part of the community.

Early childhood media representation isn’t just for the benefit of minority groups. By exposing viewers to less common cultures, programs like Ahlan Simsim help children acquire enhanced social skills, seek out diverse experiences later in life, and become more receptive to those who speak different languages than they are used to at home.

Children who are exposed to culturally diverse media may learn to become more comfortable with differences in race, religion, language, and lifestyle in real life. Research has even shown that exposure to diversity early in life can impact how successful children will become in adulthood. For instance, learning to work with others across categories of race or socioeconomic status sets children up for developing interpersonal skills that will give them an advantage later in life.

CNN reports that the first season of Ahlan Simsim is set to air locally across the Middle East in February 2020 and will be digitally available.

For nearly two centuries, courts have relied on the subjective “reasonable person standard” to solve legal disputes. Now, science can help.
The Future

Think of a combination of immersive virtual reality, an online role-playing game, and the internet.
The Present

Trees store carbon dioxide, have a cooling effect in cities, and reduce flood risks.
The Present

Nearly 90% of the world’s blind live in low-income countries.
Up Next
Strange Maps