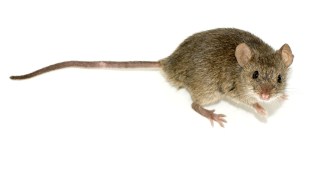 Smaller and darker than its western counterpart: an Eastern European house mouse

It’s been 30 years since the fall of the Berlin Wall, and the Iron Curtain is now a distant and dimming memory. But that’s only true if you’re a human. In the mouse world, Europe is still divided into East and West. As this map shows, the line that separates both halves of the continent is strangely similar to the Cold War frontier between capitalism and communism.

The “Squeaky Curtain” starts at the Baltic Sea, cutting through Denmark, Germany, and Austria before almost making it to the Adriatic. Instead, the line shadows the formerly Yugoslav coast before swerving east, keeping the southern Balkans in “the West,” finally diving into the Black Sea. 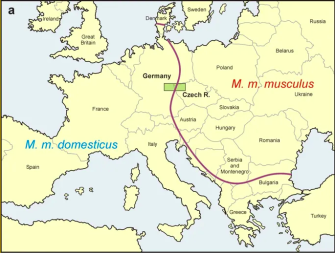 The ‘Squeaky Curtain’, dividing Europe from the Baltic to the Black Seas in two zones, for Western and Eastern house mice.

When the two subspecies met up again in Europe, is unclear. “It has been suggested that source populations first met in the southern region of the current hybrid zone, and only more recently in Central and Northern Europe, with progressive contact from south to north similar to a zipper being pulled up through Europe,” write the authors of Genetic conflict outweighs heterogametic incompatibility in the mouse hybrid zone?, a scientific paper that examines interbreeding between Western and Eastern European house mice (and the origin of this map).

“Progressive contact” isn’t necessarily a euphemism for doing the dance with two tails. The long genetic separation means the subspecies have drifted far apart. While males of either subspecies generally don’t care whom they mate with, females prefer the company of males of the same subspecies. That limits interbreeding. And hybrid couples usually produce fewer offspring than “pure” Eastern or Western ones. Both factors help explain why interbreeding only occurs in a relatively narrow and stable hybrid zone no more than 10 to 20 km wide.

The reduced capacity for interbreeding may be an indication that the two subspecies are in the process of becoming two separate species, entirely unable to interbreed. Only at the centre of the hybrid zone do hybrid mice occur in significant numbers relative to their Eastern and Western forebears. But not everything is gloomy for the hybrids: they’re more resistant to parasite-borne diseases than both Eastern and Western European house mice.

Let’s hope that squid don’t evolve lungs and legs, or humanity might be in real trouble.
Up Next
The Present

“For decades, a national anti-cruelty law was a dream for animal protectionists. Today, it is a reality.”