President Trump signed a bipartisan bill on Monday that makes acts of animal cruelty a federal crime punishable by fines and prison time.

The Preventing Animal Cruelty and Torture Act (the PACT Act) expands a 2010 bill signed by former President Barack Obama that made the creation and distribution of so-called “animal crushing” videos a federal crime, including content that showed animals being crushed, burned, drowned, suffocated, impaled or tortured. However, the Animal Crush Video Prohibition Act of 2010 only criminalized animal cruelty on the federal level if it was connected to an animal crushing video.

Now, that type of extreme animal cruelty is a federal crime, whether or not for a video.

“This common sense legislation restricts the creation and distribution of videos or images of animal torture,” Trump said Monday at the bill signing. “It is important that we combat these heinous and sadistic acts of cruelty, which are totally unacceptable in a civilized society.”

The PACT Act earned bipartisan support and passed unanimously in both the House and the Senate.

“Special thank you to all the animal lovers everywhere who know this is simply the right thing to do,” said Florida Representative Ted Deutch, a Democrat who introduced the bill this year in the House alongside Representative Vern Buchanan, a Republican. “This is a major step to end animal abuse.”

BREAKING: The president has just signed the PACT Act into law! We now have a federal anti-cruelty statute that will allow us to crack down on some of the worst and most malicious acts of animal cruelty. This is a historic day for animals, thanks to YOU!pic.twitter.com/S1x7u8AhxW

All 50 states enforce some version of animal welfare laws. But it’s sometimes difficult to prosecute animal abuse cases that involve the crossing of state lines. The PACT Act should help to close that gap. It could also help law enforcement better identify people who might also be violent to humans, according to the National Sheriff’s Association, which supported the bill.

“Our research has shown if somebody is harming an animal, there is a good chance they also are hurting or will hurt a human. If we can see patterns of animal abuse, the odds are that something else is going on,” said John Thompson, Deputy Executive Director of the National Sheriffs’ Association. 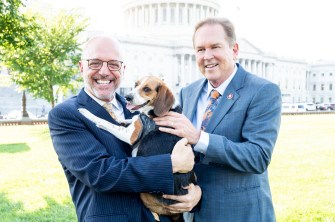 Animal crushing videos can include dogfights, but they typically involve crushing or otherwise destroying small animals as part of an extreme sexual fetish.

“Probably the worst thing I’ve seen is animals burned alive,” Mike Butcher, chief inspector of the Royal Society for the Prevention of Cruelty to Animals’ Special Operations Unit, told VICE. “Or animals microwaved to death. Sometimes they’re boiled alive. There was one with a child burning a kitten with a blowtorch, laughing and looking at the camera. I think it was filmed somewhere in East Asia.”

Under the PACT Act, people who torture animals can spend up to seven years in prison, if charged by federal prosecutors.

“The approval of this measure by the Congress and the president marks a new era in the codification of kindness to animals within federal law,” said Kitty Block, president and chief executive of the Humane Society of the United States. “For decades, a national anti-cruelty law was a dream for animal protectionists. Today, it is a reality.”

“Lac-Phe” grants obese mice the benefits of exercise — without exercising. But don’t expect an “exercise pill.”
Up Next
The Present

If you’ve ever had an affinity for machines or just wanted to know how to fix faulty household gadgets on your own, then learning the basics of electrical engineering might be up your alley.