One of the underreported tragedies of our time is that nearly 90% of the world’s blind live in low-income countries where poverty and blindness perpetuate in a descending cycle.

The main cause of this often needless and frequently avoidable blindness is cataracts, which affect 95 million people worldwide. In low- and middle-income countries cataracts account for 50% of all blindness, compared to just 5% of blindness in the West.

The truth is that cataracts are not that difficult or even expensive to cure when people have access to affordable eye care. Studies have shown that the socioeconomic effects of cataract surgery is substantial: it allows people to increase their economic productivity by up to 1,500% of the cost of the surgery during the first postoperative year.

Another study undertaken by PricewaterhouseCoopers conservatively estimated that the additional income earned as a result of building “gold standard” sustainable eye health systems in developing countries, and by treating their existing backlog of blindness and visual impairment, would considerably outweigh the costs by a factor of four to one.

This type of research understates the benefits of reducing blindness in low-income countries, because they tend to limit their analysis to benefits with a monetary value. The non-monetary benefits of curing blindness include increased education, gender equality, reduced child mortality, improved self-esteem, health costs averted and expanded social networks.

Studies have repeatedly shown that one of the fastest routes to poverty reduction is to empower women. Of the 39 million blind people in the world, 64% are girls and women. Women account for nearly 75% of cataract blindness and do not receive surgery at the same rate as men. In some parts of Africa, the risk of going blind from trachoma is now up to four times greater for women than it is for men. So, another of the benefits of combating the blindness in low-income is unlocking female empowerment

Blindness does not just exacerbate existing poverty in poorer countries, it also causes people to become poor. A review on poverty and its consequences in developing nations found that 64% of those living in poverty with disabilities were not in poverty prior to onset of the disability. Some 90% of blind individuals in poor communities cannot work.

Negative cultural stigmas also alienate sufferers from their local communities: half of blind people in impoverished countries report a loss of social standing and decision-making authority. Some 75% of visually impaired people in developing countries require assistance with everyday tasks and need to be led by either sighted children or by sighted adults. 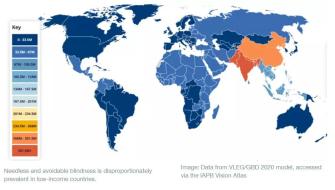 With such pervasive consequence of needless blindness in a world where cost-effective solutions already exist, one has to ask why preventing and curing needless blindness in low-income countries is not higher on the global agenda? Removing a cataract can cost as little as $50, while a study at Aravind Eye Hospital found that cataract surgery helped to break the cycle of poverty: 58% of the women who had lost their jobs as a result of becoming blind regained those jobs following cataract removal.

That poverty and blindness are inextricably linked has already been empirically proven. Also proven by research is that money alone does not solve the problem. In fact, to solve needless blindness and reduce poverty, we need to unravel a complex web of social determinants.

A major problem is that people in low-income countries need to be taught that vision loss is not “normal”. A lack of awareness that treatment is an option has been shown to be a more common reason for people living needlessly with blindness than the cost. The factors that facilitate “awareness” are all highly predictable: access to affordable local health care, higher literacy rates better access to information technology.

A significant proportion of my own work at the Tej Kohli Foundation and Tej Kohli & Ruit Foundation is not the delivery of surgeries to cure blindness, but outreach activities to locate patients and convince them to accept the free treatment. Locating patients living in remote and rural areas with low social standing who have been disenfranchised from society and even forgotten as a ‘burden’ is certainly no mean feat. Many of the people who are living in poverty with needless blindness cannot even afford to travel to obtain free eye care. In reality, what might seem like a medical challenge is actually a marketing or logistics one.

The final part of the problem is cultural. One might expect that an elderly person with cataracts would happily accept free surgery to restore their vision. But this is not the case. One study found that only 22% of blind patients who were living in poverty accepted an offer of free surgery to cure them. The same study noted complex social and cultural barriers to acceptance – which vary widely according to highly specific local factors.

As if to further accentuate the complexities of eradicating poverty-driven blindness, studies have also shown decreases in blindness in some communities without surgical interventions and without increases in the income of the local population. Researchers guess that this might be attributable to better access to water and a better understanding of hygiene. What is certain is that the reality of fighting blindness in low-income countries is highly complex, and that the ‘rules of the game’ are not always predictable or static.

What is clear is that to tackle extreme poverty, we also need to combat blindness. Blindness and poverty are both a cause and a consequence of each other. But breaking the cycle requires highly complex strategies that go very far beyond funding. Solutions must be intricately tailored to local social and cultural factors. It can be done. In fact, it must be.

Tags
Current Eventsglobal issueshealthpovertyPublic Health & EpidemiologysensessightsociologySolutions & Sustainability
In this article
Current Eventsglobal issueshealthpovertyPublic Health & EpidemiologysensessightsociologySolutions & Sustainability
Related
The Present
What’s effective altruism? A philosopher explains
Some effective altruists “earn to give” — they make as much money as they can and then donate most of it to charities.
The Present
Climate change is altering the chemistry of wine
Smoke taint from wildfires is gross, even to wine amateurs.
The Past
The Wild West was lawless and chaotic — and the police helped keep it that way
Lawmen and outlaws were often the same people.
The Present
How heat pumps of the 1800s are becoming the technology of the future
Innovative thinking has done away with problems that long dogged the electric devices — and both scientists and environmentalists are excited about the possibilities.
The Present
How circular economics can make us happier and less stressed
Entrenched business wisdom says that community-led economic systems are pure fantasy. Douglas Rushkoff disagrees.
Up Next
Strange Maps
How much does it cost to start a business? There’s a world map for that
UAE is the world’s most expensive country to start a business, but it’s free in Rwanda.