Over a thousand years ago, the ancient Khmer civilization emerged as a powerful cultural and political force in what is now Cambodia and came to dominate much of Southeast Asia.

Between the 9th and 15th centuries, the Khmer Empire created some of the most spectacular architecture in history, including one of the largest religious monuments in the world: Angkor Wat. This magnificent stone temple is one of the most famous archaeological sites in the world, visited by over 2.6 million tourists a year. A nearby temple, Ta Prohm, was featured in the movie Tomb Raider.

At first glance, the most spectacular and interesting things about the Khmer Empire are these major temples, along with the massive agricultural system built by the empire’s kings to support the people and increase their wealth. With this infrastructure, the medieval Khmer people transformed a giant floodplain into a highly engineered landscape over the course of hundreds of years.

The scale of the hydraulic system is perhaps unparalleled in the preindustrial world. They built channels that were over 20 km in length and 40–60 m wide, above-ground reservoirs thousands of acres in size, and a vast network of walled fields used for flooded rice agriculture. The largest of these were constructed by kings, who claimed credit for them in inscriptions etched on the walls of temples and commemorative stone slabs called stelae.

Most academic accounts of agriculture at Angkor have focused on this major infrastructure, and this is perfectly understandable. On the face of it, the reservoirs and major temples seem much more interesting than what also appears on the landscape: apparently random mounds of earth.

But analyses of these mounds, reaching far beyond the walls of Angkor Wat, are now revealing an important story about the development of the Khmer Empire. Archaeological investigations by our team and others reveal that a diverse network of small-holder farms was subsumed by bigger farms owned by elite, richer farmers until mass centralization took over. This happened just decades before the area slipped into decline and might have been one of the reasons for it.

It’s intriguing to see similar patterns in the United States today, as small farms are subsumed by ever bigger agribusinesses. In general, this scaling up tends to improve efficiency but reduce diversity, and can introduce risks into the food supply chain. Some of these risks may be tested in the coming months and years as the modern food system is strained by everything from climate change to the current coronavirus pandemic.

For decades, archaeologists have been mapping the regions around the great temples of Angkor using remote sensing and ground surveys. This has worked well for most of the Greater Angkor region, but some areas—especially in the urban core—are now hidden by dense forest. In 2012, the Khmer Archaeology Lidar Consortium was formed to organize a campaign of lidar (a 3D laser light scanning technique) across 370 km2 of Cambodia, including the forested areas at the center of Angkor. The resulting images revealed the surface lying beneath the vegetation. 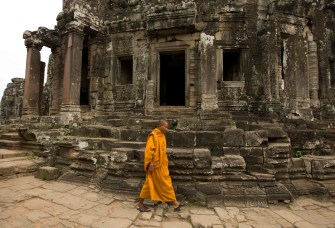 The generated maps reveal both areas of dense occupation with city blocks and streets, and lower-density areas with scattered community temples, sometimes marked by little more than a scatter of bricks or just a faint impression of a mound with a moat around it. These community temples probably served a somewhat similar function as churches in the agricultural communities of modern America do: not just to promote religion but also to facilitate social networking and help neighbors coordinate their activities. When growing rice, it’s important to coordinate and manage water collaboratively with your neighbors. If one farm hoards all the water, neighboring farms may have to let their fields go fallow. When that happens, pests take over and devastate everyone’s crops.

Our team realized that the key to cracking the code of Angkorian agriculture was to understand these community temples. The new maps showed where the temples were on the landscape, but we needed to figure out when they were built.

In a study published in 2018, we used machine learning (a form of artificial intelligence) to estimate the age of temples that didn’t have inscriptions or artistic elements to date them. In the end, we were able to assign dates to over 5,000 community temples, reservoirs, ponds, and moats.

What was strange was that we found a severe decrease in the number of new temple foundations on the landscape during the 11th and 12th centuries, right when the kings were constructing major projects like Angkor Wat, hospitals, and extensive road networks.

We pondered this strange observation for months, until we had a eureka moment. We were at a conference in Poznan, Poland, in July 2017, where me met colleagues who had noted an intriguing pattern in inscriptions relating to land ownership and disputes.

The landowners mentioned in the earlier inscriptions tended to be of all ranks in society, from lower class to higher class. However, by the mid-11th century, free males of middle rank (vāp) were no longer referenced in the context of land transactions or the foundations for new temples. By the 12th century, even free males of higher rank (loñ) were referred to as temple personnel or workers rather than as landowners. As we published in a paper this year, it seems the land was increasingly concentrated into the hands of the evermore wealthy. First the middle class was squeezed out, and then even the upper class lost their lands to the state.

This period of rapid change in agriculture in the 12th and 13th centuries coincides with a period of urbanization: the emergence of very large populations in epicenters. This was the apogee of Angkor’s political power.

But the rise of kingly centralization ushered in an extended period of political and economic decline that lasted for centuries. It seems that the concentration of land ownership and management, along with rapid growth in the population of non–rice-producing citizens in the urban core, conspired to make Greater Angkor more vulnerable to climatic and social challenges. When the political regime shifted and the city was faced with a series of extreme monsoons and droughts, the centralized system may have had a hard time coping.

Plenty of other societies and empires throughout human history have fallen prey to the problems of over-centralization. As communities grow larger, sometimes the diversity of crops grown or diverse traditions get lost. A larger, more cohesive and more uniform system can be very efficient at feeding a large population. But, if and when something goes wrong, a system can collapse quickly if it relies on a single way of doing things. Similar phenomena have been documented in the pre-Hispanic U.S. Southwest and with the Maya in Central America.

Something similar may be going on in the United States and in other nations today. Over time, much of the small-holder farmland has been bought up by big agricultural businesses. Of course, there are plenty of differences: Modern America is an entirely different place from Angkor—economically, socially, politically, and environmentally. But there are parallels. What scholars have seen in America and elsewhere is the promotion of efficiency at the cost of diversity. That introduces risk and fragility into a complex system.

Resilient systems are those that are flexible enough to respond to challenges. Global food supply networks and infrastructure will be strained by the current COVID-19 crisis as food production workers fall ill, transport falters, and borders close. Is the global food system flexible enough to meet the new demands and respond to this unprecedented challenge? Angkor’s did not seem to be. Only time will tell what happens to the world’s modern empires.

This work first appeared on SAPIENS under a CC BY-ND 4.0 license. Read the original here.

The early colonists thought they were being pulled by God into a void left by plague.
Up Next
Thinking

Christians and Muslims that pick out unconscious patterns are more likely to believe in a god.