OK, be honest… who just searched for a job on Google with this news?

Politicians such as Bernie Sanders have spoken and even introduced legislation about the travesty presented by Amazon workers surviving on food stamps to supplement their wages—especially in light of the fact that Amazon CEO Jeff Bezos makes more in one minute than many of these people do in a year.

“We listened to our critics, thought hard about what we wanted to do, and decided we want to lead,” Amazon founder and billionaire Jeff Bezos said in a statement. “We’re excited about this change and encourage our competitors and other large employers to join us.”

It’s a testament to the power of political pressure, and the high-profile nature of Amazon as a company, that it has decided to make progress in this realm. 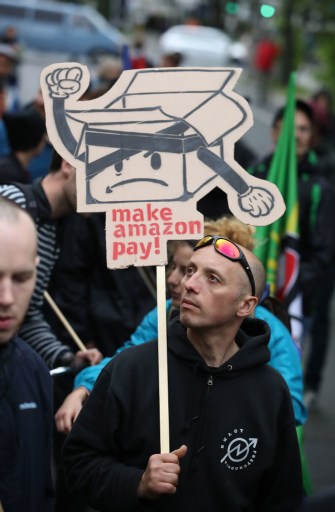 This will apply to 350,00 full time, part time, and temporary/contract workers in the United States who are vital to Amazon’s ability to deliver as promised during the upcoming holidays. It also applies to Whole Foods employees, a company purchased last year by Amazon.

In its press release, Amazon also stated that it will put pressure on the United States to increase the Federal minimum wage, which hasn’t seen a bump from the current $7.25/hr. since 2009. The tipped minimum wage has been at $2.13/hr. since 1991.

Indeed, given the tighter labor market, though many of those jobs are low-wage and few benefits, this might mean other parts of retail and online sales companies will need to work on wages as well, or risk not having enough staff on hand for the coming holiday season.

In a speech today after the Amazon announcement praising Jeff Bezos and Amazon for making this move, Senator Sanders, who just last month introduced legislation called the Stop Bad Employers by Zeroing Out Subsidies act, told the media in attendance:

“It is no secret that I have been a harsh critic of the wage and employment practices of Amazon and its owner Jeff Bezos. It has been my view that the middle class and working families of this country should not have to subsidize Mr. Bezos, the wealthiest person on Earth, because many of his Amazon employees earned wages that were so low that they were forced to go on government programs like food stamps, Medicaid and subsidized housing.”

“Today, I want to give credit where credit is due,” Sanders said.

Tags
bigthink.comEconomyglob...jeff bezosjeffrey sachsminimum wageyoutube.com
In this article
bigthink.comEconomyglob...jeff bezosjeffrey sachsminimum wageyoutube.com
Related
The Well
Tyler Cowen: America is at a critical point in history
“There’s a sense of crisis today that we did not have in the 1980’s or 90’s” — economist Tyler Cowen on progress in America.
▸
5 min
—
with
Tyler Cowen
Strange Maps
China’s most important border is imaginary: the Hu Line
First drawn in 1935, Hu Line illustrates persistent demographic split – how Beijing deals with it will determine the country’s future.
The Present
​Amazon devices have colonized homes. ‘Smart neighborhoods’ may be next
Here’s why you may want to opt-out of Amazon’s new shared network.
The Future
10 ways to prepare for the rise of intelligent machines – MIT study
A new MIT report proposes how humans should prepare for the age of automation and artificial intelligence.
The Present
The world on a billionaire’s budget
Who needs student loans, health care and mortgages?
Up Next
The Present
New, MIT-made battery is powered by CO2
In the near future, we might use the toxic gas to power homes.