Carbon dioxide is a really inconvenient little molecule. It’s bad to breathe, makes the oceans and rain acidic, and traps heat in the atmosphere, raising the global temperature. It also happens to be locked away in one of the most easily accessible forms of fuel. We’ve long known that the carbon dioxide we produce from burning fossil fuels is contributing to climate change, but there hasn’t been any practical way for us to stop doing so. Fortunately, new research from MIT has identified a way for us to turn the dangerous waste product into a useful part of batteries. 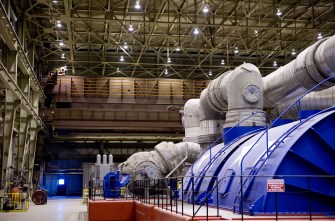 The high cost of keeping CO2 out of the atmosphere

This is a big step up from prior efforts to reduce our carbon dioxide emissions. While the best way to reduce emissions is to simply produce or use less power, this option isn’t quite palatable (or profitable) to most people. Instead, much of our efforts have been focused on capturing carbon dioxide before it leaves the power plant.

Generally, carbon-capture processes like this use solutions containing amine, a derivative of ammonia, to bind with carbon dioxide, preventing it from entering the atmosphere. But the problem with these solutions is that the amines and CO2 need to be separated again—this way, the amines can be reused and the CO2 can be safely stored. Unfortunately, doing so costs about 30% of the energy a power plant produces. Even if this process becomes more efficient, it will still come at the cost of lost energy and won’t produce any benefit—aside from a healthier planet.

A recent article published in Joule by Betar Gallant and her research team offers a more attractive alternative: Rather than sequestering CO2 deep underground, why not make use of it to produce more energy in a clean way? 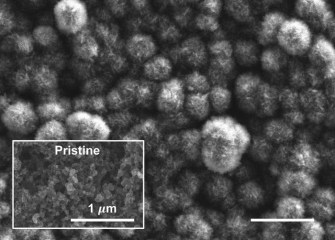 This scanning electron microscopy (SEM) image compares the carbon cathode before and after its use in the battery. The inset image shows the cathode in pristine condition (note that the scales in the two images are the same). The outer image shows the same cathode coated in material derived from CO2 produced during the electrochemical reaction. In a real-world situation, this material would have come from CO2 that would otherwise be emitted to the atmosphere.

Battery systems are made of three primary components: a cathode, which provides electrons; an anode, which receives electrons; and an electrolyte, a substance that conducts electricity between the anode and the cathode. Researchers have had the smart idea of using CO2 as a component of the electrolyte before, but they always ran into a snag. CO2 just isn’t very reactive and requires high voltages in order to conduct electricity, which is too inefficient for use as a battery. Other studies have incorporated metal catalysts into CO2-based electrolytes to make it more reactive, but these metals are expensive, and the reactions aren’t very controllable.

Here’s where the Gallant and her team’s innovation comes in. They used the same trick from carbon-capture processes to make a CO2-based electrolyte and an associated battery system that carried a voltage comparable to modern lithium-gas batteries. Essentially, they took CO2 gas and bonded it with an amine-based solution, turning the gas into a liquid.

In this system, the anode was made of lithium, and the cathode was made of carbon. When the CO2-based electrolyte reacted with the carbon cathode, the amine was cleaved from the CO2, and CO2-derived compounds built up on the cathode. To state this simply, the battery system both used up CO2 to generate electricity and produced recycled amines that could be loaded with CO2 again.

In theory, this system could be installed in power plants and continuously fed the CO2 gas that would otherwise be emitted to the atmosphere. As in traditional carbon-capture processes, an amine solution would bond with the CO2 gas, but then it could be fed into this battery system to act as an electrolyte. As the electrochemical reaction occurs, CO2-derived compounds build up on the cathode, and the amine solution can scrub new CO2 gas, repeating the process.

This sidesteps both the expensive process of separating amines and CO2 in regular carbon-capture processes and produces a more sustainable and practical CO2 battery than has been produced before.

While this is very exciting stuff, it’s important to remember that this was a proof of concept. In theory, such a system could be put into place in a power plant. But the system that the researchers built was limited in how often it could be charged and discharged. This system began to fail after about 10 charge-discharge cycles. In contrast, most lithium-ion batteries—the kind used in your smartphone—are supposed to last for about 500 cycles.

The researchers told MIT News that “lithium-carbon dioxide batteries are years away” from being used in power plants and other CO2-producing facilities. “Future challenges will include developing systems with higher amine turnover to approach near-continuous operation or long cycle life, and to increase the capacity attainable at higher powers,” the researchers said.

Despite the work that must be done to make this kind of battery a reality, Gallant and her team have provided a major insight that required creative, inter-disciplinary thinking. This proof-of-concept battery represents the first time that carbon-capturing amines have been applied to a battery system, and, if future research can make similar leaps forward, we’ll have greenhouse gas–powered batteries in no time.

The biggest nuclear blast in history came courtesy of Tsar Bomba. We could make something at least 100 times more powerful.
Health

Some artifacts drown in shipwrecks, others are taken by the tide. Many others will vanish as a result of climate change and rising sea levels.
Up Next
The Present

It’s not yet clear why this is happening, but there are plenty of suspects