Of all the animals that humans eat, perhaps the most morally troubling are pigs because they’re considered to be highly aware creatures. The stories of their sentience are myriad and make a compelling case that they know just what awaits them at slaughter. That they continue to be raised as food is heartbreaking on the face of it to many, and the conditions at pork factory farms have long been troubling. (In addition, 5,500 pigs drowned in North Carolina during Hurricane Florence.)

Now there’s a new problem with industrially bred pigs that has even the pork industry alarmed: Sow deaths from prolapse—a condition that causes a sow’s rectum, vagina, or uterus to collapse—are skyrocketing. According to The Guardian, the pig mortality rate nearly doubled between 2013 and 2016 on factory farms with more than 125 sows across 800 pork companies. Some farmers are reporting prolapse as the cause of 25% to 50% sow deaths. 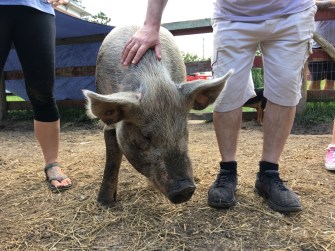 Wally, the slaughterhouse-truck-escaping pig, with the author at Soulspace Farm Sanctuary(Photo: Syd M Johnson)
Tags
Agricultureanimalsbaconbioethicsfactory farmingfarminggeneticsmoralitypigssustainability
In this article
Agricultureanimalsbaconbioethicsfactory farmingfarminggeneticsmoralitypigssustainability
Related
Life
Our antidepressant drugs are affecting animals and ecosystems
A toxicologist explains the impacts of antidepressants on fish — and no, they’re not getting any happier.
Thinking
Visual thinking: How to understand the inner lives of animals
Humans are good visual thinkers, too, but we tend to privilege verbal thinking.
Life
Scientists use CRISPR to insert an alligator gene into a catfish
Disease kills off 40% of farmed catfish. This gene protects them.
Hard Science
200 years of exploring Antarctica
What we’ve learning from the world’s coldest, most forbidding, and most peaceful continent.
Strange Maps
The great European house cat migration
Ancient bones reveal that domesticated felines were at home in Pre-Neolithic Poland around 8,000 years ago.
Up Next
Hard Science
Physics Nobel awarded to Donna Strickland, third woman in history to win
Strickland, whose research helped advance the field of laser science, is the only living female Nobel laureate for physics.