In the wake of Europe’s unprecedented heatwave, the international community is seeing further glimpses of the many changes which lie ahead for our world climate. Recently, a French mountaineer caught a beautifully striking, albeit disconcerting picture of a glacial lake in the High Alps.

Alpinist Bryan Mestre, took the photographs of the newly materialized lake on June 28th near the base of Dent du Géant Mountain, part of the larger Mont Blanc range that runs through France and Italy. A frequent hiker, Mestre remarked that this was the first time he’d ever seen a lake at this altitude during the summer months.

Hikers and climate scientists alike expect to see some glacial melting during the hottest days of summer. But the creation of an entire lake is a remarkably rare event. And one we might be seeing more of as climate change keeps turning up the heat.

Europe was in one of the most intense heat waves in recent memory this June. When Mestre discovered the lake on June 28th, France set an all-time record high of 114.6 degrees in the southern Gallargues-le-Montueux region. Record temperatures in the Mont Blanc region topped out at 48.74 degrees.

The Mont Blanc mountains remain covered in snow and ice all year round. The lake that Mestre found was around 9,800 feet above sea level and is also usually covered in ice.

“Needless to say, the lake was a real surprise… It’s located in the 3,400 to 3,500-meter (11,155 to 11,483-feet) area. You’re supposed to find ice and snow at this altitude, not liquid water. Most of the time when we stay for a day at this altitude, the water in our water bottles starts freezing,” Mestre told IFL Science.

Water above the Alp’s 3,000 meter line is supposed to stay permanently frozen.

When speaking to the London Evening Standard, Mestre also remarked that:

“I have seen similar events in the Andes or in the Rockies, but the ecosystem is a lot different there. Snow is permanent in the Alps above 3,000 meters — it’s not supposed to melt. Of course, with the whole global warming deal, it does melt, but it doesn’t get this big.”

According to National Geographic France the lake was around 10 meters by 30 meters or (33 feet by 98.5 feet). The lake was holding a couple thousand cubic meters of meltwater.

While this may have been an initial surprise to Mr. Mestre, many French glaciologists are starting to see a concerning trend as a similar lake was discovered in the same place last year. 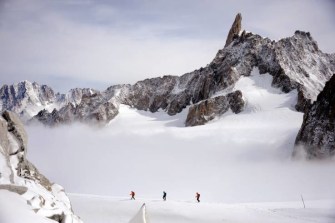 Christian Vincent, a glaciologist at the Grenoble Glaciology Laboratory, believes that there is a direct link between the formation of this kind of pond and global warming.

Vincent remarks about a similar experience when a pond had formed over by the Rochemelon glacier in the Arc Valley, which sits on the French-Italian border. A lake had sprung up over a number of years, slowly gaining in size:

“At first it was a small pond formed in the 1960s, which grew without anyone perceiving its evolution. It was during a reconnaissance a few years ago that I realized that it contained 650,000 cubic meters of water and that it was threatening to overflow. An alert was then given and an artificial emptying operation had cleared the lake.”

Vincent warns that we must be vigilant in tracking and understanding how these glacial “lakes” appear. While there is no immediate threat from the pond Mestre spotted, that doesn’t preclude future problems from arising from this area or other ones like it.

“When the volume of these lakes becomes very important, it can become very dangerous if they overflow on the surface. This can threaten downstream structures and homes,” says Vincent.

Discovered in 1900, the Saint-Bélec slab languished unrecognized in a castle basement for over a century.
Hard Science

Icebergs aren’t just a threat to unsinkable ships. Their ability to cause underwater landslides poses a danger to coastal cities.
The Present

A new study from Iceland confirms that a shorter workweek improves productivity.
The Past

Trees store carbon dioxide, have a cooling effect in cities, and reduce flood risks.
Up Next
The Present