A prolific orator, writer and philosopher, Alan Watts was one of the first contemporary figures in the early 20th century to bring Eastern Zen philosophy and thought to a large Western audience. He was an instrumental figure in the 1960s counterculture revolution and continued to write and philosophize until his passing in 1973. His lectures and writings today seem to be seeing a resurgence in popularity.

With countless hours of his lectures sprawled online, sampled into dreamy chillwave music and the likeness of his voice even featured as an advanced A.I. in the movie Her, it seems Alan Watts still has a whole lot to tell us.

Alan Watts’ advice on education is more prescient now than ever

In our current age of industrialized mass anxiety, students and educators alike are working more grueling and unproductive hours, while at the same time they’re still underperforming when compared to more relaxed and productive educational systems, like those in Scandinavia.

Here is an Alan Watts pronouncement that sums up a large part of his philosophical outlook.

“If happiness always depends on something expected in the future, we are chasing a will-o’-the-wisp that ever eludes our grasp, until the future, and ourselves vanish into the abyss of death.”

Taking into account some of Watts’ philosophy, we can shift our views on the subject of life, learning and education through a more inspired and whimsical viewpoint. 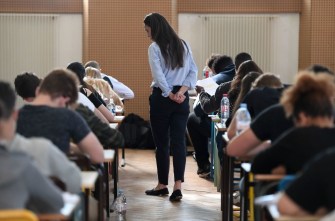 School’s endless cycle of preparing us for what’s next

For the great majority of us, our early lives were defined by the ever-increasing grade scales we progressed through, from elementary school into middle school and so on. These were our internal ranking and status symbols as we barreled through our early life’s big biological and mental changes, shifting from one well-placed rung to the next and following our teacher’s orders if we wanted to keep up with the already-laid path for becoming a successful member of society.

Alan Watts found this idea a strange and unnatural progression of our early lives, and something that was indicative of a much deeper-seated issue in how we view the nature of change and reality. Watts says:

“Let’s take education. What a hoax. You get a little child, you see, and you suck it into a trap and you send it to nursery school. And in nursery school you tell the child ‘You are getting ready to go on to kindergarten. And then wow-wee, first grade is coming up, and second grade, and third grade.’ You are gradually climbing the ladder towards, towards, going on towards progress. And then when it gets to end of grade school, you say ‘high school, now you’re really getting going.’ Wrong.”

Whether we consciously recognize it or not, this expectant progressive nature of reality we foster during our school years is something that becomes an undeniable fabric of the way we live and think. It sticks with us our whole lives.

We’re constantly moving forward to some goal that’s just out of reach—never within the now, always later or after this or that accomplishment has been reached.

Watts believed that this same logic applies to us once we leave the tiered school system. He goes on to say:

“But on towards business, you are going out into the world and you got your briefcase and your diploma. And then you go to your first sales meeting, and they say ‘Now get out there and sell this stuff,’ because then you are going on up the ladder in business, and maybe you will get to a good position. And you sell it and then they up your quota.

“And then finally about the year 45 you wake up one morning as vice president of the firm, and you say to yourself looking in the mirror: ‘I’ve arrived. But I feel slightly cheated because I feel just the same as I always felt…'” 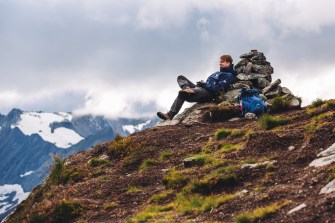 Have I arrived yet?

Here Alan Watts touches on a classical bit of Buddhist philosophy—the idea that there really isn’t in fact anything to strive forward to and desire. Watts ties this aspect into the desire of one-upmanship in the educational system bleeding into our professional lives. This is an example of the unending ennui of materialistic pursuit in some form or the other.

Alan Watts goes on to say:

“Something is missing. I have no longer a future.’ ‘Uh uh’ says the insurance salesman, ‘I have a future for you. This policy will enable you to retire in comfort at 65, and you will be able to look forward to that.’ And you are delighted. And you buy the policy and at 65 you retire thinking that this is the attainment of the goal of life, except that you have prostate trouble, false teeth and wrinkled skin.

“And you are a materialist. You are a phantom, you are an abstractionist, you are just nowhere, because you never were told, and never realized that eternity is now.”

Now rather than falling into a passive nihilism (which is where Buddhist thought can lead) Alan Watts instead argues for being within the here and now. Learn for learning’s sake! Eternity is now… that is to become fully part of the process—whatever it may be—and do not focus on an ever elusive end goal.

Not tying ourselves to the end result is something most people will never understand because it’s counter intuitive. This ideal was a central focus of Alan Watts’ philosophy.

In the opening chapter of his book The Wisdom of Insecurity, he coined the term “backwards law,” of which he says:

This koan of his illustrates that when we put too much pressure on ourselves to meet some ideal or goal in the spectral future, we detract from the working process at hand. It will never be reached because what needs to be done isn’t our central focus.

Conversely, by being completely involved in the present, those elusive goals in the future could one day come to fruition. This is where the concept gets muddled for some.

But it can be simply summed up as follows: not looking towards the future will prepare you for it. 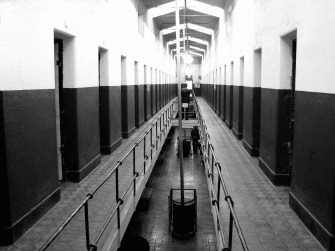 A flawed system from the start

Alan Watts felt the educational system failed us by the very way it prepared us to look forward to the rest of our lives. An idealized version he cooked up in his head of what a great educational upbringing would look like can be gleaned from this passage:

“When we bring children into the world, we play awful games with them. Instead of saying, ‘How do you do? Welcome to the human race. Now my dear, we are playing some very complicated games, and these are the rules of the game we are playing. I want you to understand them, and when you learn them when you get a little bit older you might be able to think up some better rules, but for now I want you to play by our rules.’

“Instead of being quite direct with our children, we say, ‘You are here on probation, and you must understand that. Maybe when you grow up a bit you will be acceptable, but until then you should be seen and not heard. You are a mess, and you have to be educated and schooled until you are human.'”

He even likened the compulsory educational system as having heavy religious undertones.

“‘Look you are here on sufferance. You are on probation. You are not a human being yet.’ So people feel this right on into old age and figure that the universe is presided by this kind of awful God-the-Father parent.”

Much of this still resonates with us today. Alan Watts’ sage advice on education just might be the thing we need to revisit if we’re to escape the monotonous reality of modern education.

Scientific pluralism is the notion that some questions must be approached from many angles. How can we integrate these scientific models?
Up Next
Leadership

Leading by Example: How to Increase Employee Empowerment

As a leader, you’re in an incredible position to contribute to the success of your employees, as well as create an environment that promotes, encourages, and nurtures employee empowerment. By […]