The United States tries hard to keep nuclear weapons away from countries it considers foes. Given how close the world came to nuclear armageddon during the Cold War, and recent threats from so-called “rogue states” like North Korea, it may seem like an essential goal. But America’s strategy for thwarting nuclear proliferation may be reaching a point where the costs outweigh the benefits.

The first nuclear bomb was exploded the same year as the invention of the microwave. Nuclear technology is no longer new, and therefore more difficult to keep from spreading. (Imagine trying to keep microwave technology under wraps all these years.) Developing a nuclear bomb from scratch, however, is much more costly than reverse engineering a microwave.

But snuffing out a country’s nuclear capabilities is perhaps even more costly. It requires crippling a country’s economy so its government can’t invest in nuclear research (of course, its innocent citizens bear the brunt of that burden). It requires destroying factories and laboratories with aggressive bombing or cyber-sabotage campaigns. And it can even require kidnapping or killing scientists and engineers who conduct nuclear research.

Iran, for example, is seeking nuclear technology while coldly aware of the United States’ military superiority. Likewise, the rest of the world is aware of America’s massive nuclear arsenal—and of the fact that it’s capable of annihilating any country on Earth at a moment’s notice. 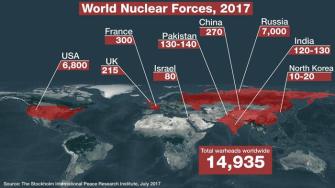 This kind of behavior toward other countries, needless to say, won’t engender kindness and cooperation. North Korea knows that developing a small nuclear arsenal has made the U.S. much more hesitant to invade its borders. It’s a lesson Pyongyang learned recently from countries without nuclear weapons—Iraq, Libya, Syria—that were subsequently invaded by the U.S. So it makes perfect sense that America’s enemies would be scrambling to develop nuclear weapons—not so they can fire them, but so they can also enjoy the benefits of deterrence.

So the question becomes: How often is the U.S. willing to wage preventive wars, and with how many countries does it really want this kind of relationship?

This isn’t to suggest that, for instance, a nuclear-capable Iran makes the world safer for the U.S., but it has to be viewed in the context of relative military power. For instance, take a look below at the sheer number of U.S. military bases that surround Iran.

Barry Posen, Director of MIT’s Security Studies Program, says the U.S. has its guns pointed at aspiring nuclear weapons states in a way that makes them feel even less secure. 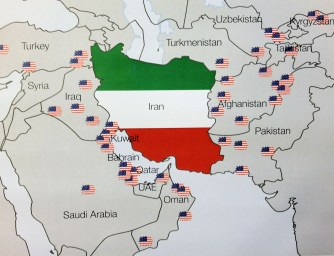 So then, what should be America’s main objective when enemy states develop nuclear weapons? Posen told Big Think that the US should make sure those states hold onto them:

These concerns are valid. In U.S. military history alone, there have been 32 nuclear weapons accidents, referred to as “Broken Arrows.” Several are still missing to this today. Outside of the U.S., most of the fear about “loose nukes” has been focused on Russia since the collapse of the Soviet Union.

“There have been no confirmed reports of missing or stolen former-Soviet nuclear weapons, but there is ample evidence of a significant black market in nuclear materials,” notes an article from the Council on Foreign Relations. “The International Atomic Energy Agency (IAEA) has reported more than a hundred nuclear smuggling incidents since 1993, eighteen of which involved highly enriched uranium, the key ingredient in an atomic bomb and the most dangerous product on the nuclear black market.” 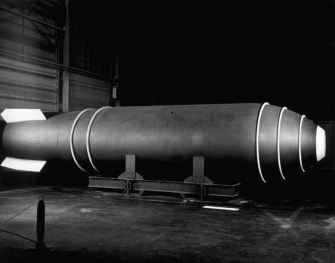 It’s rational for countries to want to develop nuclear weapons, and because the technology to do so is rather old and no longer a mystery, it’s increasingly difficult to stop nuclear proliferation. It seems inevitable.

This is why Posen argues that the best way for the U.S. to prevent nuclear attacks isn’t to wage preventative wars that result in the economic and physical suffering of innocent civilians. Rather, it’s to ensure that nuclear weapons stay in the hands of countries and not radical groups. After all, nuclear deterrence loses its power in situations where nukes are wielded by organizations without defined borders.

Instead of just Afghanistan, the U.S. military ought to withdraw from the entire Middle East and much of the rest of the world.
Strange Maps

Opponents of 19th-century American imperialism were not above body-shaming the personification of the U.S. government.
The Past

A Nazi institute produced a Bible without the Old Testament that portrayed Jesus as an Aryan hero fighting Jewish people.
Up Next
Starts With A Bang

Earth’s Rotation IS Slowing Down. But More Earthquakes? That’s A Hypothesis, Not A Fact

A crack in the ground caused by an earthquake in Japan. If this new idea is correct, 2018 should see up to 30 earthquakes of magnitude 7.0 or greater. Image […]