There’s no doubt that the adult Tyrannosaurus Rex was a fearsome predator, with a powerful bite that could cause the head of a victim to explode from sheer force. Of course, much of what we’ve longed “known” about T. rex is informed speculation based on incomplete information. However, paleontologists at New York’s American Museum of Natural History (AMNH) are about to unveil the result of a remarkable project.

They’ve constructed stunning models of the T. rex as a hatchling, as a four-year-old, and as an adult based on the latest discoveries and thinking. Their intent is to provide the most scientifically accurate renderings ever of the T. rex as part of their “T. rex: The Ultimate Predator“exhibit running from March 11, 2019 to August 9, 2020.

The biggest surprise? The hatchling. Who ever thought a T. rex could be so, well, crazy-cute!?

As more fossils are discovered, we learn more and more about the Tyrannosauroidea family. The first discovery of a feathered dinosaur, the Sinosauropteryx prima in 1996, suggested we might’ve been picturing the ancient creatures, including T. rex, incorrectly. More recent discoveries such as the Yutyrannus huali have only bolstered this suspicion. In addition, archeologists have begun finding infant Tyrannousaur fossils, and this has allowed the team at the AMNH, led by Mark Norell, to realistically imagine T. rex at three life stages for the “Ultimate Predator” exhibit.

Not all Tyrannosaurs were T. rexes — there were dozens of Tyrannosaur species, and no others were as large. The “Ultimate Predator” show includes a number of them, including the Dilong paradoxus. Most were about the size of a T. rex youngster as adults. They were all, however, all dangerous predators — and the AMNH exhibit will feature new representations of a variety of family members. Most Tyrannousaurs were fast runners, unlike the adolescent and adult T. rex, a slower-moving death machine. (The hatchling ran.)

There’s still a fair amount of conjecture involved, but between what’s visible in the fossil record and what can be seen today in T. rex’s living relatives, there’s little doubt that experts are growing ever-closer to a complete understanding of these creatures who last roamed the earth some 68 million years ago. A lot can be inferred from these familial connections, including feeding and parenting behaviors and various as-yet-unknown physical features. For example, fossilized T. rex footprints are nearly identical to the modern emu, albeit bigger, and so inferences can be made about their feet.

Speaking of skin, contrary to the traditional belief that T. rex’s skin was akin to a contemporary lizard’s or snake’s, experts now suspect it was actually a more leathery covering, similar to that of the foot of a chicken or the leg of a turtle.

The new AMNH models reflect the latest theories regarding every minute details of their physiognomy. 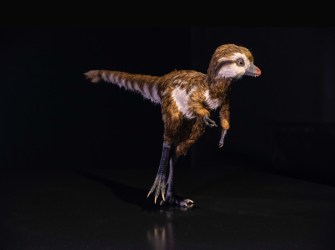 About 60 percent of T. rex hatchlings — about the size of turkeys — probably didn’t survive to their first birthday. The downy-feathered tykes grew quickly, though, about 140 pounds a month, but it still took until they were about 20 to reach full size. Experts believe that they were quick little predators with lots of tiny, needle-like teeth. Like modern Komodo dragons, they probably fed on insects and smaller vertebrates before maturing into their grownup fare.

By the time T. rex was around four, it was as big as other non-rexTyrannosaurs. (AMNH says this is about five times the size of a four-year-old human boy.) It was fully feathered, with teeth good for slicing and cutting as opposed to crushing, the speciality of the adult T. rex. At this stage, T. rex also had long arms — it’s believed they stopped growing prior to reaching full size, resulting in the oddly teeny arms of the adult T. rex. 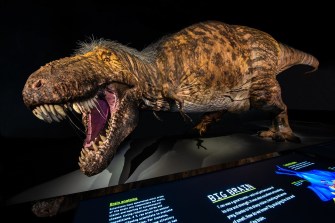 Even scarier than before? Image source: AMNH/D. Finnin

This is the terrifying bad boy — or girl — we know and fear, albeit likely with more feathers than you might have once thought. The monster was up to 40 feet long, and weighed between 11,000 and 15,500 pounds.

T. rex’s banana-shaped teeth and mighty jaws could clamp down with 7,800 pounds of force — that’s about the weight of three cars. It was one of very few creatures ever to be capable of pulverizing and digesting the solid bone of prey. (30–50 percent of T. rex coprolites, fossilized poop, is actually crushed bone.)

If that wasn’t enough, we now know that T. rexsenses were super-sharp. Orange-sized eyes faced forward, hawk-like, and were set far enough apart that T. rex had great depth vision. Examination of its brain casings suggests an exceptional sense of smell and of hearing, too.

The new exhibit has a shadow-theater floor projection of one of these nightmares coming to life.

If you’re fortunate enough to visit the AMNH for the T. rex: The Ultimate Predator exhibit, you’ll have the opportunity to get up close and personal — safely — with T. rex.

“Tristram Shandy” trolled its way to fame.
Up Next
Neuropsych

These powerful habits from six powerful people are worth taking to heart.