Ancient Stonehenge stands silently on the U.K.’s Salisbury Plain amidst the continual thrum of cars zipping by on the A303 motorway. It is about as anachronistic as a thing can be, a mysterious object out of time whose mysteries continue to fascinate us.

Bit by bit, Stonehenge’s puzzle pieces are falling into place—when its stones were put up, its bluestones’ origins in distant Welsh quarries—and a very big one may have just fallen into place. New research suggests that Stonehenge was actually built some 200 km (124 miles) away in Wales where it stood for hundreds of years before being taken apart, transported to its current location, and reassembled with the addition of some local stones.

Lead author of the research, published in Antiquity, is archaeologist Michael Parker Pearson of University College London, who says, “I have been leading projects at Stonehenge since 2003 and this is the culmination of twenty years of research. It’s one of the most important discoveries I’ve ever made.” 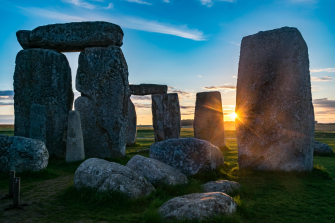 The theory has to do with Stonehenge’s bluestones. These are the 43 smaller upright stones positioned at the inside of the structure. They’re called “bluestones” not because they’re normally blue, but because they take on a bit of that hue when they’re wet. (The outer, taller, stones at Stonehenge are sarsens, and the stones laying across the tops of other stones are its lintel stones.)

It has been known for some time that the bluestones were dug from a quarry in the Preseli Hills of Wales 200 km away some 5,000 years ago. (The larger sarsen stones are believed to have come from about 15 miles away from Stonehenge.)

There’s been a problem with dates, though. The rocks were extracted about 5,000 years ago, between 3400 BC and 3000 BC. That’s 300 or 400 years before Stonehenge was built. Where were they all that time? “They’re clearly not spending 200 years slowly moving them across the landscape,” co-author of the research Joshua Pollard tells Science Magazine.

The earliest writing about the origins of Stonehenge was Geoffrey of Monmouth’s c. AD 1136 “History of the Kings of Britain.” In it, the author suggests that Stonehenge was constructed from the stones of a dismantled Giants’ Dance stone circle atop the mythical Mount Killaraus, having been moved to Salisbury under the command of Merlin. Fantasy, to be sure, but the distant origin of the bluestones may underpin the central idea that these stones were actually repurposed from another place and time. 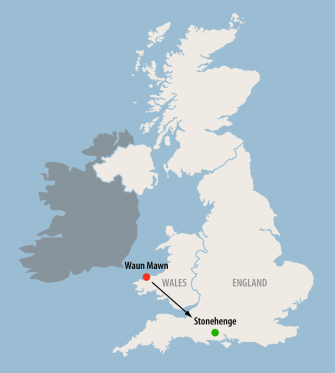 The “Stones of Stonehenge” project identified a possible Welsh stone circle in 2010, Waun Mawn, but had not excavated it. In 2017 and 2018, a research team led by Parker Pearson began serious exploration. They identified an ancient megalith quarry nearby and the toppled bluestone remains of the stone circle, estimated to be the third largest yet found after Avebury in Wiltshire and Stanton Drew in Somerset.

At Waun Mawn were socket-shaped pits that likely held other, long-gone bluestones. The researchers used optically simulated luminescence to determine how long ago the sediments buried inside the pits had been exposed to light, and radiocarbon-dated charcoal found inside. The shrine dates back pretty perfectly to 3400 BC, in line with the time the bluestones had been quarried.

The researchers mapped out the likely arrangement of the stone circle by extrapolating between the remaining stones and empty stone sockets. They arrived at a shape that measured about 100 meters across, the same as Stonehenge’s original layout, the ditch currently surrounding it. (Stonehenge has been rearranged many times since it was first built.) Waun Mawn, like Stonehenge, was aligned on the midsummer solstice.

The researchers estimate that the missing bluestones were removed between 300 and 400 years after the stone circle was built, around the time Stonehenge was built. “We’re quite confident the reason they come down is they’ve gone to Stonehenge,” Parker Pearson tells Science Magazine.

Other clues? One of the Stonehenge bluestones has an unusual shape that matches one of the Waun Mawn pits perfectly. In addition, sone chips found in that pit precisely match that stone at Stonehenge.

Sometime after 3000 BC, the people living near Waun Maun left — there’s little evidence of habitation in the area after about 3400 BC, according to Parker Pearson. “It’s as if they just vanished,” he says. “Maybe most of the people migrated, taking their stones — their ancestral identities — with them, to start again in this other special place. This extraordinary event may also have served to unite the peoples of east and west Britain.”

Analyses of plant and animal remains at Stonehenge indicate that the people who built it spent their early years on the Welsh coast, providing evidence, says Pollard, that “We’ve got regular contact between the two regions.”

Parker Pearson suggests that maybe the people who built Stonehenge incorporated the bluestones from Waun Mawn for one of two reasons: to have something of their former home in their new one, or to use the bluestones as symbols of their authority, thus entitling it to respect and power among their new neighbors.

In any event, Pearson suspects there’s more to the story. Waun Mawn’s stones may not be the only transplants at Stonehenge:

“With an estimated 80 bluestones put up on Salisbury Plain at Stonehenge and nearby Bluestonehenge, my guess is that Waun Mawn was not the only stone circle that contributed to Stonehenge. Maybe there are more in Preseli waiting to be found. Who knows? Someone might be lucky enough to find them.”

Tags
ancient worldarchaeologygeologyhistorystonehenge
In this article
ancient worldarchaeologygeologyhistorystonehenge
Related
Hard Science
200 years of exploring Antarctica
What we’ve learning from the world’s coldest, most forbidding, and most peaceful continent.
High Culture
The most controversial painting in Russian history
Created in the 1880s, “Ivan the Terrible and His Son Ivan,” which depicts a father murdering his son, divides Russians to this day.
The Past
Ceramics, corn cobs, and other strange things we used before toilet paper
Some objects were softer than others.
Neuropsych
The trouble with medicating mental illness
Has the “age of psychopharmacology” shrunk society’s sense of responsibility for mental health?
Strange Maps
The great European house cat migration
Ancient bones reveal that domesticated felines were at home in Pre-Neolithic Poland around 8,000 years ago.
Up Next
Hard Science
Study reveals a “boring” era when Earth was flat, with no mountains
A study of europium crystals shows the planet was mostly flat during its middle ages.