An ancient skeleton of a man dating back to the Iron Age was uncovered outside of London last month, and though archaeologists aren’t certain what the cause of death was, clues point to a murder most foul.

A skeleton representing a man who was tossed face down into a ditch nearly 2,500 years ago with his hands bound in front of his hips was dug up during a high speed rail excavation.

The positioning of the remains have led archaeologists to suspect that the man may have been a victim of an ancient murder or execution. Though any bindings have since decomposed, his hands were positioned together and pinned under his pelvis. There was also no sign of a grave or coffin.

“He seems to have had his hands tied, and he was face-down in the bottom of the ditch,” said archaeologist Rachel Wood, who led the excavation. “There are not many ways that you end up that way.”

Currently, archaeologists are examining the skeleton to uncover more information about the circumstances of the man’s death. Fragments of pottery found in the ditch may offer some clues as to exactly when the man died.

“If he was struck across the head with a heavy object, you could find a mark of that on the back of the skull,” Wood said to Live Science. “If he was stabbed, you could find blade marks on the ribs. So we’re hoping to find something like that, to tell us how he died.”

The grim discovery was made at Wellwick Farm near Wendover. That is about 15 miles north-west of the outskirts of London, where a tunnel is going to be built as part of a HS2 high-speed rail project due to open between London and several northern cities sometime after 2028. The infrastructure project has been something of a bonanza for archaeology as the area is home to more than 60 ancient sites along the planned route that are now being excavated before construction begins.

The farm sits less than a mile away from the ancient highway Icknield Way that runs along the tops of the Chiltern Hills. The route (now mostly trails) has been used since prehistoric times. Evidence at Wellwick Farm indicates that from the Neolithic to the Medieval eras, humans have occupied the region for more than 4,000 years, making it a rich area for archaeological finds.

Wood and her colleagues found some evidence of an ancient village occupied from the late Bronze Age (more than 3,000 years ago) until the Roman Empire’s invasion of southern England about 2,000 years ago. At the site were the remains of animal pens, pits for disposing food, and a roundhouse — a standard British dwelling during the Bronze Age constructed with a circular plan made of stone or wood topped with a conical thatched roof. 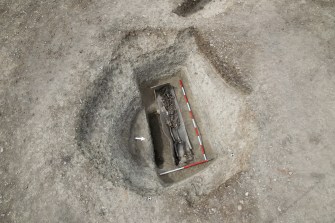 A high status burial in a lead-lined coffin dating back to Roman times. Photo Credit: HS2

While these ancient people moved away from Wellwick Farm before the Romans invaded, a large portion of the area was still used for ritual burials for high-status members of society, Wood told Live Science. The ceremonial burial site included a circular ditch (about 60 feet across) at the center, and was a bit of a distance away from the ditch where the (suspected) murder victim was uncovered. Additionally, archaeologists found an ornately detailed grave near the sacred burial site that dates back to the Roman period, hundreds of years later when the original Bronze Age burial site would have been overgrown.

The newer grave from the Roman period encapsulated an adult skeleton contained in a lead-lined coffin. It’s likely that the outer coffin had been made of wood that rotted away. Since it was clearly an ornate burial, the occupant of the grave was probably a person of high status who could afford such a lavish burial. However, according to Wood, no treasures or tokens had been discovered. 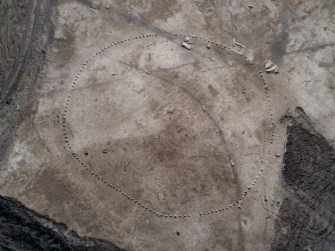 An aerial view of the sacred circular monument.Photo Credit: HS2

One of the most compelling archaeological discoveries at Wellwick Farm are the indications of a huge ceremonial circle once circumscribed by timber posts lying south of the Bronze Age burial site. Though the wooden posts have rotted away, signs of the post holes remain. It’s thought to date from the Neolithic period to 5,000 years ago, according to Wood.

This circle would have had a diameter stretching 210 feet across and consisted of two rings of hundreds of posts. There would have been an entry gap to the south-west. Five posts in the very center of the circle aligned with that same gap, which, according to Wood, appeared to have been in the direction of the rising sun on the day of the midwinter solstice.

Similar Neolithic timber circles have been discovered around Great Britain, such as one near Stonehenge that is considered to date back to around the same time.

Tags
ancient worldarchaeologydeathEuropehistoryviolence
In this article
ancient worldarchaeologydeathEuropehistoryviolence
Related
The Past
The Wild West was lawless and chaotic — and the police helped keep it that way
Lawmen and outlaws were often the same people.
Thinking
6 great philosophers and how they used their political power
Most philosophers merely contemplate the world, but what about the ones who actually tried to change it?
The Past
Ancient migration: Bering Strait land bridge from Asia to North America was not a one-way road
Ancient humans crossed the Bering Strait land bridge from Asia into North America. But some of them went back.
High Culture
Did Paul Cézanne hide an early self-portrait underneath a 160-year-old still life?
To answer that question, we may have to figure out when the famed painter started to go bald.
Strange Maps
Dutch government releases a genuine treasure map from WWII, sparking a hunt for the loot
X marks the spot. The Dutch town of Ommeren has been swamped by detectorists armed with shovels looking for $20-million treasure.
Up Next
Hard Science
Virgin Galactic uses space tech to create new supersonic jet
The space tourism company Virgin Galactic teams up with Rolls Royce to create a new Mach 3 supersonic aircraft.