In 79 CE, near the Bay of Naples, Mt. Vesuvius erupted. Geologically, this was business as usual for the volatile volcano, but for the nearby cities of Pompeii and Herculaneum, it proved a cataclysmic event.

After the terrifying initial blast, the volcano spewed ash and rocks miles into the atmosphere. As this volcanic drift cooled, it began to snow onto the cities. It collapsed buildings under its weight and suffocated those unlucky enough to not flee. Then came the pyroclastic flows—massive waves of ash, gases, and lava fragments that washed over the cities at speeds of more than 100 miles per hour. All told, Vesuvius unleashed more than 100,000 times the energy of the two atomic bombs dropped during World War II on doomed towns nestled beneath it.

It seemed as though the cities weren’t simply wiped off the map but practically from history itself, banished to a footnote in historical text. And so when explorers in the 1700s found the super-heated ash had preserved the city with taxidermic care, it was a miraculous discovery.

Today, Pompeii’s fossilized slice-of-life gives historians an unprecedented view into a moment of history and culture. Bodies lie where they lived, traces of their clothes and other belongings still clinging to their forms. Frescos retain their imagery and vibrant colors. Fast food joints (called thermopolium) can be found with the jars still holding remnants of their menu items. Even the brain cells of a young man managed to survive the ages in vitrified conservation.

Each excavation teaches us something new about life in this Roman resort town, and Pompeii continues to surprise archeologists and historians well in the 21st century. 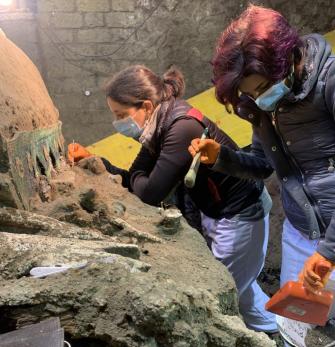 In a recent discovery, researchers unearthed a first-of-its-kind chariot at Civita Giuliana, an excavation site north of Pompeii’s ancient walls. In Roman times, the site served as a getaway for Rome’s elite and wealthy citizens, a serene countryside brimming with villas and Mediterranean farms. So, it’s understandable why such an exquisite chariot was found here.

“I was astounded,” Eric Poehler, a professor at the University of Massachusetts Amherst, who specializes in Pompeii traffic, told NPR. “Many of the vehicles I’d written about before … are your standard station wagon or vehicle for taking the kids to soccer. This is a Lamborghini. This is an outright fancy, fancy car.”

Located in a double-level portico, the chariot is a far cry from anything Ben-Hur would have been seen cruising around in. It sports four iron wheels and a high seat complete with arm- and backrest. The sides are adorned with engraved bronze and wooden panels painted with red-and-black figures. And the rear bumps with a register of bronze and tin medallion depicting Eros-inspired scenes of satyrs, nymphs, and cupids. In short, this chariot is slab.

“It is an extraordinary discovery for the advancement of our knowledge of the ancient world,” Massimo Osanna, the director of the archaeological park, said in a statement. “At Pompeii vehicles used for transport have been found in the past, […] but nothing like the Civita Giuliana chariot.”

But unlike a Lamborghini—which serves only to show the owner has more money than sense—this chariot served a social and cultural role. Likely a pilentum, it would have been rolled out in times of ceremony, potentially during festivals, processions, or weddings.

While similar chariots have been uncovered in northern Greece, this is the first such chariot to be discovered in Italy. Its presence in Pompeii will further help historians understand the people who called the city home, as well as their relation to the Mediterranean world.

As Poehler added, “This is precisely the kind of find that one wants to find at Pompeii, the really well-articulated, very well-preserved moments in time. And it happens to be in this case an object that is relatively rare despite its ubiquity in the past.” 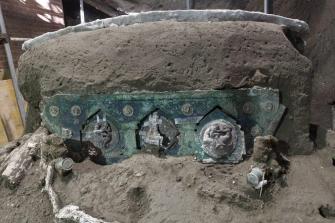 Beyond its gilded appeal, the chariot is also special because it survived so we could learn from it. The area where the vehicle was found has been favored in recent years by looters, and illicit tunnels had been dug precariously close to the chariot’s resting place. For this reason, the archeological park has teamed up with the Public Prosecutor’s Office of Torre Annunziata to protect Pompeii’s history and excavate its treasures before they become lost or stolen.

“The collaboration between the Public Prosecutor’s Office of Torre Annunziata and the Archaeological Park of Pompeii has proved itself to be a formidable instrument, not only for bringing finds of exceptional historical and artistic value to light, but also for halting the criminal actions of individuals who for years have been the protagonists in a systematic looting of the priceless archaeological heritage preserved in the vast area of the Civita Giuliana villa, which is still largely buried and to which the recent exceptional findings bear witness,” Nunzio Fragliasso, chief prosecutor of Torre Annunziata, said in his joint statement with Osanna.

Nor is everything that glitters historic gold. Even Pompeii’s everyday ephemera can have an outsized impact on history. Pompeian citizens, for example, viewed street walls as a type of “public advertisement space” and so painted them thick with graffiti. As historians must often rely on the written works of the literate elite, this graffiti gives the ordinary Pompeians their voice back. One such charcoal tag even corrected the record of Vesuvius’s eruption by two months, from August to October, contradicting the traditionally accepted date set by Pliny the Younger.

“Today, archaeologists try to understand ancient societies by studying the entire material record — not just the beautiful or luxurious objects, but also the broken bits of cooking pottery, the animal bones thrown into the trash, the microscopic grains of pollen in the soil, and much more,” Caitlín Barrett, associate professor at Cornell University, told CNN.

This ephemera is also at risk. Looters looking for eye-catching treasure and artwork will often destroy everyday objects in their pursuit. And after centuries encased in protective sedimentary rock, the city has again been exposed to the rains, winds, and human blunders that erode. The goal now isn’t just to excavate fantastic treasures, but to preserve the world heritage site and learn from it for as long as time (and maybe Vesuvius) will allow.

Tags
Ancient Technologyancient worldarchaeologyarcheologyarteducationEuropehistorymuseumsnatural disaster
In this article
Ancient Technologyancient worldarchaeologyarcheologyarteducationEuropehistorymuseumsnatural disaster
Related
Strange Maps
The horrors of World War II air war, in one stark map
This graph shows how badly German cities were hit by Allied bombing raids.
The Future
How the metaverse will revolutionize K-12 and higher education
Imagine going on a tour through the human circulatory system as a tiny cell. That is just one example of education in the metaverse.
High Culture
Why are flood myths so common in stories from ancient cultures around the world?
Could the prevalence of flood myths around the world tell us something about early human migration or even the way our brains work?
The Past
The Wild West was lawless and chaotic — and the police helped keep it that way
Lawmen and outlaws were often the same people.
Thinking
6 great philosophers and how they used their political power
Most philosophers merely contemplate the world, but what about the ones who actually tried to change it?
Up Next
Health
New study suggests placebo might be as powerful as psychedelics
New study suggests the placebo effect can be as powerful as microdosing LSD.