Many mysteries surround Stonehenge. Who built it and what purpose did it serve? Why that arrangement of megaliths and lentels? How did Neolithic people move and erect such massive stones using 5,000-year-old technology? Because Stonehenge’s builders left us no written record, historians, archaeologists, enthusiasts, conspiracy theorists, and outright cranks have tried for centuries to translate their prehistoric silence into answers.

As scientific tools and techniques have advanced, we’ve learned to better discern the forensic clues left behind in the megaliths, inhumed bodies, and landscape of the Salisbury Plain. Today, scientists have traced Stonehenge’s “bluestones“—smaller dolerite stones found in the monument’s interior—to quarries in Preseli Hills, Wales. They’ve also established that the bluestones likely served as grave markers for the people buried there, also from Wales.

Thanks to our scientific tools, and a reclaimed piece of history, another Stonehenge mystery has been solved. Scientists have pinpointed the source area for most of the monument’s extant sarsens. And no, aliens did not carry these megaliths with tractor beams to create an interstellar landing pad. Sorry, cranks. Stonehenge’s origin is far more terrestrial, found in a little spot near Marlborough Downs. 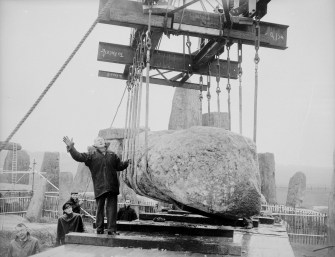 In 1958, engineers undertook the task of re-erecting a Stonehenge trilithon that fell in 1797. Three cores drilled into a sarsen disappeared soon after.(Photo: John Franks/Getty Images)

“Sarsen” is the common term for the giant sandstone—more specifically, duricrust silcrete—megaliths that enwreathe Stonehenge. Fifty-two of an estimated 80 sarsens remain today. They form both the interior horseshoe and the uprights and lintels of the outer circle, as well as peripheral stones like the Heel and Slaughter Stones. The largest sarsens stand at about 30 feet tall and weigh around 25 tons.

The immense size of these boulders sits at the center of one of Stonehenge’s most enticing enigmas. How did people, using only Neolithic technology, manage to move and prop up such massive stones? A major piece to that puzzle has been their source, as the answer would inform scientists on the opportunities and challenges facing the builders as they moved the sarsens.

To find that piece, David Nash, the study’s lead author and a professor at Brighton University, and his team analyzed the sarsens using a portable X-ray fluorescence spectrometer. This non-intrusive analysis allowed them to generate initial chemical characterizations for the stones’ 34 chemical elements.

“Until recently we did not know it was possible to provenance a stone like sarsen,” Nash said in a release. “It has been really exciting to use 21st century science to understand the Neolithic past and answer a question that archaeologists have been debating for centuries.”

To further hone in on the source area, the team needed to generate high-resolution chemical signatures by analyzing a sample. Of course, the idea of tearing a sample out of this World Heritage Site would be near sacrilege. Luckily, a previously lost piece of history had recently been returned to the British people.

In 1958, a restoration program re-erected a Stonehenge trilithon that fell in 1797. After lifting the sarsens, engineers discovered cracks in one of the uprights (Stone 58). They drilled out three cores from the stone and inserted metal ties to reinforce its integrity. The holes were filled with sarsen plugs to hide the intrusion. However, the three cores disappeared.

Flash forward to 2018. Robert Phillips, an 89-year-old U.S. citizen and on-site worker during the restoration, returned one of the three cores. Nash and his team were granted permission to sample a piece from “Phillips’ core.” They used a plasma mass spectrometer to create a chemical signature for the monument, one they could compare to potential source sites across southern Britain.

They found a match in West Woods, Wiltshire. Fifty of Stonehenge’s 52 sarsens share a chemical signature with the stones in this area, strongly suggesting they were sourced there. The area also sports a high concentration of evidence for early Neolithic activity, adding to its plausibility.

“To be able to pinpoint the area that Stonehenge’s builders used to source their materials around 2,500 BC is a real thrill,” Susan Greaney, senior properties historian at English Heritage, told the BBC. “While we had our suspicions that Stonehenge’s sarsens came from the Marlborough Downs, we didn’t know for sure, and with areas of sarsens across Wiltshire, the stones could have come from anywhere.”

She added the evidence showed “how carefully considered and deliberate the building of this phase of Stonehenge was.”

The study was published in Science Advances.

A view of Stonehenge during the Summer Solstice.(Photo: Wikimedia Commons)

Thanks to Nash and his team, scientists now know the source of Stonehenge’s sarsens. This clue can help them solve other Stonehenge mysteries. That most of the stones were sourced from one location, the study notes, suggests that they were erected at about the same time. It also reveals the routes the Neolithic builders had to traverse with their heavy loads.

But questions remain. Why did the builders choose West Woods when the Salisbury Plain is dense with sarsen? Why were two megaliths (Stones 26 and 160) sourced elsewhere? And were the missing stones gathered from West Woods or elsewhere?

These questions only touch on the sarsens. The question that intrigues so many of the monument’s visitors remains hotly debated: Who built Stonehenge and why? Was it a burial site for the Stone age elite? A monument marking British unification? A Druid Mecca? We don’t know, but as scientific tools advance, we may be able to break the prehistoric silence that has laid over Stonehenge for so long.

Many key inventions were unique: one-offs.
Up Next
Hard Science