The multi-ton, anthropomorphic ancient statues dotting the grasslands of Easter Island pose a mystery that’s intrigued outsiders since they were first seen by Europeans in 1722. The East Polynesian island’s inhabitants, the Rapanui — who called the island itself “Rapa Nui” — had been making the statues for 500 years until sometime shortly after first contact. Across the island the basalt moai stand atop roughly 300 platforms, or ahu. A study published in PLOS One in January 2019 may finally explain what each statue signifies. The short answer: Potable water.

Rapa Nui from above

The Rapanui and Rapa Nui

That the Rapanui were able to construct a thousand of these massive figures is impressive, given how hard life must have been for them. (About 400 of the statues are still in the islanders’ quarry at Rano Raraku.)

The low-lying island in the South Pacific is 2,000 miles from its nearest neighbors, and volcanic in origin. With the tallest of its main peaks rising just 500 meters above sea level, Rapa Nui is flat, with little in terms of valleys. Though there’s some fresh water in crater lakes, the bedrock is porous, and so there are few permanent streams from which fresh water can be obtained. It’s a windy place with little reliable rainfall. There’s evidence that there were once extensive palm forests on Rapa Nui, but they were lost due to land clearing and the effects of an invasive species, the commensal Pacific rat (Rattus exulans). If that wasn’t hardship enough for the islanders, the island is surrounded by what the study calls an “impoverished marine environment” lacking substantial coral reefs or even a lagoon.

Even so, beginning shortly after the Rapanui arrived from other Polynesian islands in the 13th century, development of moai and ahu began. 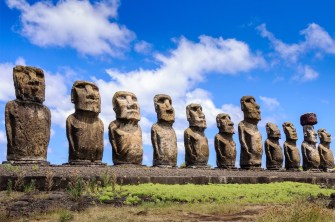 Moai atop an image ahu

About the moai and about ahu

It’s believed that the hundreds of positioned moaiwere walked — “waddled” might be a better word — to their final destination from the quarry, with the Rapanui rocking them side to side as the statues were pushed forward. Getting their “hats,” pukao, made of heavy red-scoria, placed atop their heads is another puzzle that seems to have recently been solved.

There are several varieties of ahu. Image ahu are platforms with a a dressed-stone sea-wall that held one or more moai. It’s believed that these pre-date European contact, and are thus the ahu analyzed in the new study as they best reflect Rapanui ideas prior to outside influence. Other forms of the platforms are, according to the study, “the semi-pyramidal ahu, ahu po’e po’e, and ahu avanga.”

The most important resource for the Rapanui

The study’s authors hypothesized that the moai served notice of ownership or control of something important to the Rapanui. The plan was to see if the locations of the moai were tied to any such critical resource. Previous research by JoAnne Van Tilburg found “The need constantly to restate that ownership, generation after generation and in the context of a growing population and a changing natural environment, seems to have been one of the driving forces of ahu construction, although other social and religious motivations obviously existed.” Researchers focused on 93 moai located in the eastern part of the island, where the most data about resources exists.

Dietary protein for the Rapanui apparently consisted of near-shore marine species caught offshore with nets, snares, and hook and line. These included several eel and fish species. The primary plant food source for the Rapanui was the sweet potato. They also ate yams, dryland taro, and sugar cane. These crops were grown in lithic mulch gardens all over, and thus with no particular association with the positioning of moai.

Sitting in the middle of the salty ocean and with rainwater largely running down through porous rock to underground aquifers meant sources of fresh-water at ground-level were as precious as they were vital. “The existence of fresh water seeps near coastal ahu is well-known and was certainly important at European contact. However, such seeps are today, and probably always were, minor resources. It is highly unlikely, in my view, that these resources were of major importance in locating ahu during prehistory,” explained co-author Carl P. Lipo to The Guardian.

Inland drinking water, on the other hand was another story. The study found that the locations of moai strongly correlated with sources of fresh water. It’s why they are where they are. “Every time we saw massive amounts of fresh water, we saw giant statues,” recalls Lipo. “It was ridiculously predictable.”

The study also suggests that the statues united members of a community around an important resource as well as providing them a monumental project on which to collaborate. He says, “Anything that brings you together is going to make you stronger and allow you to survive. I think that is the secret to Easter Island.”

Stockholm Syndrome is the most famous of 10 psychological disorders named after world cities. Most relate to tourism or hostage-taking.
Up Next
Life

The dogs’ ability to recognise and process human faces surpasses even that of monkeys. This newly-identified brain region may be the reason why.