While technology develops at exponential speed, transforming how we go about our everyday tasks and extending our lives, it also offers much to worry about. In particular, many top minds think that automation will cost humans their employment, with up to 47% of all jobs gone in the next 25 years. And chances are, this number could be even higher and the massive job loss will come earlier.

So when will your job become obsolete? Researchers at the University of Oxford surveyed the world’s best artificial intelligence experts to find out when exactly machines will be better at humans in various occupations.

Katja Grace from Oxford’s Future of Humanity Institute led the team that gathered responses from 352 academics and industry experts in machine learning. Then they calculated the median responses to come up with some concrete numbers.

In the next 10 years, we should have A.I. do better than humans in translating languages (by 2024), writing high-school-level essays (by 2026), writing top 40 songs (by 2028) and driving trucks. And while the consensus may be that driving trucks may come by 2027, it’s easy to predict that this could happen even sooner, with top tech entrepreneurs like Elon Musk constantly pushing the envelope and promising these innovations earlier.

A chore that would take less time – folding laundry should be a breeze for A.I. by 2022. Other tasks might take longer, but still within the foreseeable future. It’s likely you’ll be around for these. We should get A.I.-driven machines in retail by 2031. By 2049, A.I. should be writing New York Times bestsellers and performing surgeries by 2053.

Overall, A.I. shoud be better than humans at pretty much everything in about 45 years. 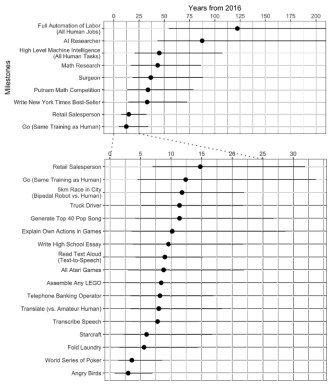 As MIT Technology Review points out, these predictions have a way of coming earlier. A.I. wasn’t supposed to beat humans at the game of Go until 2027 and that happened back in 2015. In fact, it took Google’s DeepMind just two years to come up with the necessary tech, instead of the 12 that was predicted.

On the other hand, as 40 years is an average person’s working life, predictions that extend past that might be unreliable as they are based on technology in which the experts might not have enough practical knowledge.

Interestingly, there is a difference in how experts from different parts of the world view the future. Asian researchers put the A.I. takeover in just 30 years, while their North American counterparts see that happening in about 74 years. Full automation of labor is expected in under 125 years.

You can check out Grace’s paper here.

Tags
aiartificial intelligenceautomationemploymentfuturefuturismhow longjobsMIToccupationspredictionstudy
In this article
aiartificial intelligenceautomationemploymentfuturefuturismhow longjobsMIToccupationspredictionstudy
Related
The Present
Even in the age of AI, some problems are just too difficult for computers
Computers are growing more powerful and more capable, but everything has limits
13.8
What kind of intelligence is artificial intelligence?
The initial goal of AI was to create machines that think like humans. But that is not what happened at all.
Life
How artificial intelligence is helping us decode animal languages
Communication among cetaceans, like whales and dolphins, looks especially promising.
Thinking
Killer robots and the banality of evil
“Lethal autonomous weapon” sounds friendlier than “killer robot.”
The Future
The brief history of artificial intelligence: The world has changed fast – what might be next?
Despite their brief history, computers and AI have fundamentally changed what we see, what we know, and what we do.
Up Next
Technology & Innovation
CRISPR May Cause Hundreds of Unintended Mutations Into the Genome, New Study Finds
In case you haven’t already heard of CRISPR-Cas9, it is the revolutionary gene-editing technology, discovered just a few years ago, that allows scientists to edit the DNA of any species […]