Do you pine for the days of the Start button, Microsoft Paint, the iconic Solitaire, and Minesweeper? (What, really, was the point of that game? Can anybody tell me?)

Now, on the 23rd anniversary of its launch, you can download Windows 95 for free, to anything running Windows, macOS, or Linux. It’s about 130MB in size, so not bad, and it takes up about 200MB of RAM when operating on a modern system. And it’s listed as “Windows 95 V 1.0,” which would indicate further releases are planned. (Note: There is already a fresh release that allows for—get this—floppy disk support, so now it’s at V. 1.1.0). 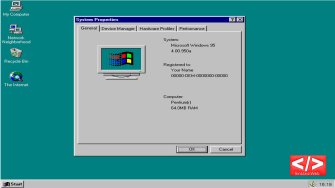 There are a few things missing from this software-as-an-app release, including the classic Space Cadet Pinball, but most of the rest is intact. Note that you cannot access the Web from the classic original Internet Explorer included with this release, but that’s OK. It’s so rife with security holes, that’s probably a good thing.

As Design Museum says, the original release sold seven million copies in five weeks. That’s about $1.5 billion in revenue at full price. No wonder; Microsoft had allocated $300 million for marketing and advertising.

#OnThisDay in tech history, #Windows95 was launched with 7 million copies sold in the first 5 weeks of its release. Some of the new features included: the start button and a task-bar for better navigation.

What are your memories of using Windows 95? Comment down below! pic.twitter.com/fpG2Y29Yzy

I find myself wishing I could go back to that time period and purchase stock in Microsoft and AOL. Ahhh... dreams.

It was all put together by one of Slack's developers Felix Rieseberg, based on multiple existing releases of the OS (including one that runs on an Apple Watch. Not quite sure why, exactly, you'd want to do that.) Get yours here: https://copy.sh/v86/

I put Windows 95 into an Electron app that now runs on macOS, Windows, and Linux. It's a terrible idea that works shockingly well. I'm so sorry.

Challenge: For the full nostalgic experience, can you try your best to get the infamous Blue Screen of Death?

Lastly, just in case you forgot, the launch of Windows 95 was accompanied by a live video of a collection of white men including Bill Gates and Steve Ballmer dancing, clapping, and pumping their fists excitedly to the discomfort of all who watched it then, and ever since. Bless their hearts:

Understanding Mezirow’s theory of transformative learning can help you become a catalyst of change.
Up Next
Surprising Science

Creationists believe that every aspect of reality was planned. Conspiracy theorists think that major socio-political events were planned. We now know why there is an overlap between the two groups.