Many of us have claimed “everything happens for a reason” or “it was meant to be” when presented with less-than-desired outcomes or random occurrences. Some of us see a great plan at work when we look at nearly everything; others see vast plots afoot every time they watch the news.

This kind of thinking is called teleological thinking. It is characterized by pointing to random or natural events and seeing them as caused by an intelligence or as part of a larger plan. Lots of people do it, and it is a key part of the intellectual development of children.

In some cases, like business ethics, it is a useful way of thinking. Until the scientific revolution, it defined a great deal of western thought about the natural world. Today, however, it is a scientific no-no.

Less positively, it is associated with the teleological fallacy, where the incidental use of something is taken as evidence of it being designed to fulfill that purpose.

A person who thinks this way might say things like “we have large noses so we can fit glasses on our faces” or “it is dry in the desert so cactus plants have a place to live.” Both statements assume a grand purpose for noses, or areas with low rainfall, that doesn’t exist or are unsubstantiated. It is an unscientific worldview that can get in the way of finding the real causes at work.

A tendency to teleological thinking is correlated with a belief in creationism. This is intuitively reasonable since a tendency to think everything is part of a plan lends itself to trying to impose divine order on random biological events. Somehow, studies have not been carried out to see if the same correlation exists with similar beliefs—not until now, anyway.

Researchers in France have published a new study showing the relationship between teleological thinking and a belief in conspiracy theories. Their study, published in Current Biology, involved more than 2,000 test subjects from the general public and university student bodies.

Their study consisted of online and pen-and-paper questionnaires consisting of 100 questions. In the first part of the test, respondents were asked to answer true and false questions designed to determine how inclined they were to teleological thought. The statements were simple, such as “Bats hunt mosquitoes to control overpopulation.” In this case, a person answering “true” would reveal their tendency to teleological thinking.

The rest of the questions focused on how well the subjects could judge an explanation’s plausibility and determined any biases in their answers.

The next part of the test focused on grand conspiracy theories of a general nature. Participants had to rate the likelihood that statements such as “The government is involved in the murder of innocent citizens and/or well-known public figures, and keeps this a secret” were correct. They then did the same thing for specific conspiracy theories, such as ones revolving around the assassination of President Kennedy.

Lastly, subjects were asked to rank images shown to them consisting of black and white squares on a grid on a scale of “certainly not random” to “certainly random.” As this picture shows, the answers are rather clear and can be used to determine if a person tends to assign meaning to random data. 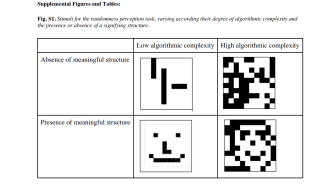 As you can see in this chart. The images were both simple and complex, and either had a structure or were randomized. A person who thinks that there is a pattern to the top row’s pictures is likely to ascribe meaning to random data. (Wagner-Egger et al.)

The second iteration of the experiment asked the same questions but added the subject’s belief in creationism to the analysis. The final version added a section to better asses how being good at correct teleological thinking (e.g. thinking that pasta comes in different shapes to hold different sauces) factored into the conspiracy mindset.

Subjects who believed in any of the conspiracy theories tended to believe in multiple others, too, supporting previous studies that hinted at a “conspiracy mentality,” a frame of mind that drives some people to see conspiracies everywhere. The authors suggest that the correlation between the three scales of teleological thinking they tested for; test, true and false casual, suggests “the existence of a teleological mentality, that partly overlaps with the conspiracist mindset.”

What about the creationists?

When the belief in creationism was factored in, the researchers found a strong correlation between a belief in creationism, the conspiracy mentality, and teleological thinking. The results held true even when accounting for demographics, political views, and religious tendencies.

These findings expand on previous studies into how and why people come to hold extreme beliefs. They are also conceptually backed by the philosophy of Karl Popper, who suggested long ago that grand conspiracy theories were motivated by this kind of thinking, and even suggested that “Illuminati” conspiracy theories are the modern incarnation of divine intervention claims.

The authors remind us that “teleological thinking has long been associated with creationism and identified as an obstacle to the acceptance of evolutionary theory.”

With this in mind, they propose that we can start viewing conspiracies as creationistic, in that an intelligence purposefully created every socio-political event, and that we can view creationism as a grand conspiracy; in that it assumes everything was purposefully designed for specific reasons.

The findings could also be used to understand how anti-scientific worldviews are formed and how to best communicate with the people who hold them. It can also explain why both creationists and conspiracy theorists are both seemingly immune to evidence that refutes their worldviews- even the evidence against them can be viewed as part of a plan thanks to the power of teleological thinking.

Teleological thinking is a common thought process that we all use every once in a while. When it gets out of hand, however, it can cause some people to see patterns where none exist and to reject the idea that some things might not be the result of a master plan. While it might be some time before we finally learn how to educate people out of fallacious teleological thinking, we do have a better understanding of how it alters the way some people view the world.

There is no evidence for God as a “big being.” Is God something else?
▸
4 min
—
with
Bishop Robert Barron
Up Next
Culture & Religion

A new study compares the psychedelic DMT with near-death experiences.