Let’s say you’re just now tuning in to reports that the world will end on December 21 when the Mayan calendar resets to zero. Maybe you’re one of the 35 million Americans who fear it will really happen. Maybe the prospect of solar storms, rogue planets and devastating floods is a welcome distraction from more pedestrian anxieties of everyday life. Or maybe you’re just curious how such a ridiculous idea could persuade “panicked” Russians to buy up all the “matches, kerosene, sugar and candles” in town or spur a Chinese man to spend his life savings building an ark to keep him afloat after the catastrophe.

Where do you turn to learn more? To the epistemic umbrella of the 21st century, of course, and here is what Google will show you. 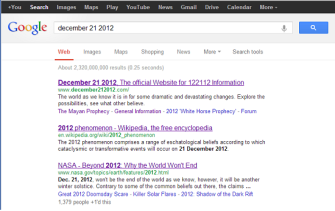 Do you consult the first hit, billed as the “official website for 122112 information”? Do you settle for the detailed account in the Wikipedia entry, listed second? Or do you flick down to the third, an earnest attempt by NASA to explain “Why the World Won’t End”?

If you go with the first site, you will find a bizarre, colorful bazaar of information, perspectives and advice on the approaching doomsday. There is enough to keep you occupied here for a while: a list of celebrities who believe the hype (finding Mel Gibson on the list isn’t much of a surprise, but Janeane Garofolo? really?), an article listing “37 Things You Should Start Hoarding Now” and one remarkable video summarizing the various ways the world might end and calling on world leaders to tell the “TRUTH” about the devastation awaiting us:

The video is a study in epistemic manipulation. Narrated by a man with a severe British accent, the presentation claims — three times — “we just don’t know what to believe anymore” about “the most anticipated date of our time.” Implying that the media, corporate advertisers, the “government-sponsored scientists” at NASA and “even highly respected major religious organizations” are all either mistaken or willfully fooling us, the video appeals to our “gut instincts that something is wrong — something just doesn’t feel right.” It’s a miracle Stephen Colbert hasn’t picked this up yet. “In the eyes of many,” the video announces with no substantiation, “the prophecies of doom have been written.”

The sad hilarity of NASA’s attempt to calm everyone down takes the form of a staid FAQ. There are no bells and whistles, videos, garish colors or flashing links. Just sober, somewhat condescending, straightforward claims: “Our planet has been getting along just fine for more than 4 billion years, and credible scientists worldwide know of no threat associated with 2012.”

The problem is that credible science often fails to convince the masses. It cannot budge the majority of Americans who continue to deny the reality of evolution. It cannot convince more than 41 percent of Americans that the activities of human beings play a role in global warming. It’s no wonder, then, that so many people worldwide are keeping doomsday supply companies in business, buying up freeze-dried food rations and personal bunkers rather than Christmas presents, or that sites like December212012.com are profiting from these advertisers.

It’s dispiriting to witness the mass delusion of a tenth of humanity. You have to feel sorry for the Chinese ark-builder who will be left penniless on December 22, and you have to empathize with the people who are contemplating killing their pets or committing suicide to avoid the doomsday devastation.

But this unsettling phenomenon is a symptom of a universal human quandary: how to know whom to trust about things we can’t see or don’t understand. In a section on the rationality of belief in his delicious book Cunning(2006), political and legal theorist Don Herzog offers this:

The best argument against the doomsday believers may come on December 22, when, with any luck, most of us will still be around. But as my fellow blogger David Ropeik explained recently, and as Herzog’s analysis indicates, the next epistemological doomsday is just around the corner.

How to make $71 billion a year: Tax the churches

While the desire to tax churches is not new, it seems as far from reality as possible at this moment. As has been commented, no atheist could possibly hope to […]