There must be something in the water out in Silicon Valley — if there’s any water left — that’s making some typically very smart people do some atypically very dumb things.

Case in point: Airbnb has become the latest major tech company to face public outcry over an ill-conceived ad campaign. From Gizmodo:

“This week, Airbnb rolled out a series of ads around San Francisco to raise awareness of the $12m or so it raises for the city through hotel taxes. Sadly, the effect was passive-aggressive — and it’s now at the receiving end of biting criticism.

The ads in question have been posted on bus shelters and billboards around San Francisco. In each case, they address a public service provider, then suggest a possible use for some of those tax dollars.”

The ads are part of an $8 million campaign aimed at defeating Proposition F, a San Francisco ballot measure that would restrict the short-term rental market in the rent-crazy city. The campaign’s stated purpose is to inform voters of the ostensible value of tax revenue generated via Airbnbs. The problem, as you can see in the images below, is that the tone they adopted, which may have been aiming at “hip and savvy,” landed somewhere closer to “snotty douchebag”: 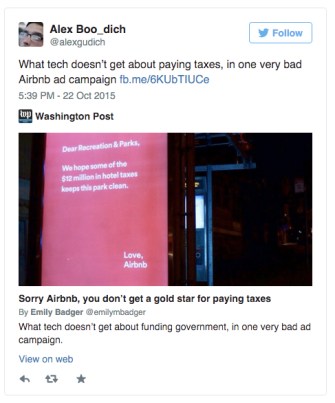 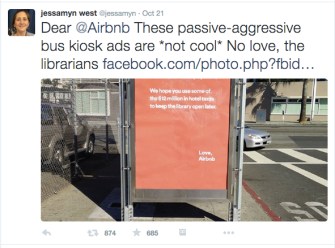 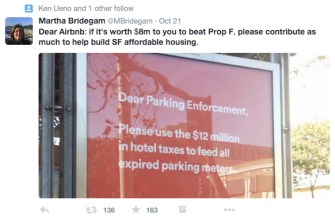 You can see more of the ads here. Some are fairly innocuous; others are absolutely dripping with the sort of arrogant smarm that makes even millennials go, “Man, I hate millennials.”

Local residents have not responded well. Martha Kenney, a professor at San Francisco State University, authored a much-shared takedown in which she chides the company for being disingenuous. Predictably, Airbnb has decided to remove ads and offered an apology “to anyone who was offended.”

When being tone-deaf, it’s best not to make a spectacle of yourself

A few months ago someone at Tinder lost their mind and staged an embarrassing Twitter tantrum in response to an unflattering profile in Vanity Fair. As social media is the absolute worst venue for attempting to mount a cogent argument, especially when you’re all worked up, the rant came off as weak and childish. The Internet’s whip-quick response lodged a digital pacifier in Tinder’s mouth: Apologies were proffered; think pieces were penned; and everyone acknowledged that sometimes folks just don’t think before they tweet.

Even though Twitter meltdowns are almost categorically silly and dumb, they’re generally considered excusable. Most of the time, some intern gets thrown under the bus and everybody just moves along with their lives.

Airbnb’s recent faux pas stands apart because its “$12 million in taxes” campaign didn’t get rolled out without the approval of multiple eyes. That every single one of those eyes was blind to how San Franciscans would respond is a reflection of myopia within Airbnb’s company culture. There’s an undeniable air of entitlement in those ads. They’re bragging about paying taxes as if it’s philanthropy!

Just as spoiled children will have to face harsh truths come adulthood, these companies are slowly realizing that no, they don’t deserve to operate unregulated; no they aren’t exempt from investigation and criticism; no, not everyone thinks their shtick is cute.

Reductionism is a successful way to explain the universe, but it cannot replace experience. This is part of the mystery of life.
Strange Maps

Are we approaching quantum gravity all wrong?

An exclusive interview with physicist Lee Smolin reveals how abandoning Einstein's dream may have been a terrible mistake.
Up Next
Personal Growth

Birth Order Doesn’t Affect Personality, but It Does Affect Intelligence

Younger siblings generally have a lower IQ than their older brothers and sisters, according to three large national surveys from the US, UK, and Germany.