Autism spectrum disorder (ASD) is a very broad set of neurodevelopmental conditions. Around 1 in 160 children have it worldwide. It’s a much larger ratio in the U.S. at 1 in 68. While symptoms vary significantly, those who experience ASD often have trouble communicating, managing their emotions or developing social skills.

Some with autism develop speech problems. Others have difficulty reading social situations or adapting to new environments. Others still exhibit anxiety, hyperactivity or other compulsive behaviors. ASD sometimes comes with cognitive impairment, but not always.

Children usually start showing signs of autism at 18 months of age or so. Research has shown that early intervention can help make the condition more manageable. Unfortunately, no one knows what causes it, although it’s thought to have both genetic and environmental components. What’s more, no reliable diagnostic is currently in place (here is how the disease is currently diagnosed). But thanks to work by an international team of scientists, an autism test is now on the horizon.

Researchers at the University of Warwick in the UK, partnering with colleagues at the University of Bologna, in Italy, have identified a number of different biomarkers present in those with autism, that’s absent in those who don’t. Their discovery should lead to a medical test for the condition—either a blood or urine test—a first of its kind. The results of the study were published in the journal Molecular Autism. 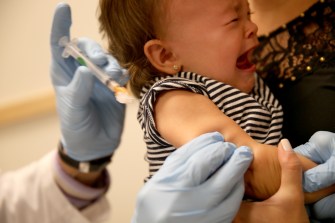 For the study, scientists compared blood samples from 38 Italian children diagnosed autism (29 boys and 9 girls) to 31 children without the diagnosis (23 boys and 8 girls). The children were all between the ages of 7 and 12. With help from colleagues at the University of Birmingham, U.K., researchers used artificial intelligence algorithms to compare and contrast the proteins in the two groups’ samples. This allowed for the development of an algorithm that could tell which children have ASD with 90% accuracy, and which children didn’t, with 87% accuracy.

The algorithm kept an eye on higher levels of a molecule known as dityrosine (DT), which is present when proteins are damaged during oxidation or advanced glycation end products (AGE). The latter occurs when proteins or fats come into contact with glucose and are altered by it. Those with autism showed higher levels of protein damage.

The lead author of the study was Naila Rabbani, a biologist at the University of Warwick. “Our discovery could lead to earlier diagnosis and intervention,” she said in a press release. “We hope the tests will also reveal new causative factors. With further testing we may reveal specific plasma and urinary profiles or ‘fingerprints’ of compounds with damaging modifications. This may help us improve the diagnosis of ASD and point the way to new causes of ASD.” 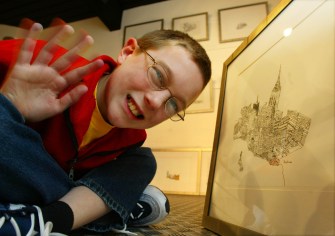 What does the test mean for those with autism who excel? Credit: Getty Images.

Previous research has shown that 30-35% of autism cases are genetic in origin. The other 65-70% come from a combination of rare genetic variants, a series of mutations, and environmental factors. The results of this study could help uncover previously unknown causes of autism. It also supports suspected ones. “Our finding is consistent with low-level inflammation in ASD,” Rabbani said, “and also with disturbance in the supply of amino acids to neurons.”

What’s more, the researchers have increased the accuracy of an ASD diagnosis. Rabbani told Gizmodo, “Our test is expected to improve the accuracy of ASD diagnosis from 60–70 percent currently achieved by experts in neurological disorders to approximately 90 percent accuracy.” The test has already been patented. Now, Rabbani and colleagues are looking for corporate sponsorship to help develop it, and get it ready for the regulatory approval process. But the very next step is to validate these findings with a larger cohort. As Rabbani told the BBC, she aims to test younger children, perhaps as young as one or two.

Experts caution that once commonplace, the test won’t tell parents where on the spectrum their child would be, or the severity of the condition. Instead, it would outline what risk factors a child has. It’s important to note too, that many with ASD have made significant contributions to society and are loved by friends and family.

There are those autistic savants as well, who have unparalleled math, music, or artistic capabilities. As a result, many with ASD don’t see themselves as having a disease, merely a condition. So what does such a test mean for those with autism who are happy or even blossoming?

Related
Life
Scientists use CRISPR to insert an alligator gene into a catfish
Disease kills off 40% of farmed catfish. This gene protects them.
Neuropsych
How you breathe affects your brain
Your breathing rhythm influences a wide range of behaviors, cognition, and emotion.
Health
What happens when regular porn watchers abstain for a week?
Researchers watched for signs of withdrawal — but didn’t find any.
Neuropsych
Daily caffeine intake temporarily alters your brain structure
Compared to people who took a placebo, the brains of those who took caffeine pills had a temporarily smaller gray matter volume.
Thinking
Why you should laugh at yourself, according to Seneca and Nietzsche
“It is more human to laugh at life than to lament it.”
Up Next
Politics & Current Affairs
FCC publishes net neutrality repeal, starting 60-day countdown until it becomes law
The FCC is scheduled to repeal net neutral on April 23, but Democrats still have a long-shot chance of turning things around.