The Federal Communications Commission is scheduled to repeal net neutrality rules on April 23. The agency formally published the final notice of the repeal in the Federal Register on Thursday, starting a 60-day countdown until net neutrality is eliminated.

But net neutrality supporters still have a chance to turn things around. Dozens of organizations are expected to challenge the repeal in court, and Democrats have been pushing for a special congressional vote to block the Restoring Internet Freedom Order from going into effect.

Democrats, along with two independents and Sen. Susan Collins (R-Maine), so far have 50 votes in the Senate – one vote shy of overcoming the Republican majority. If Senate Democrats succeed, a measure would still have to pass in the House of Representatives. And even if it does, President Donald Trump would have the power to veto it.

Attorneys general from more than 20 states have filed lawsuits to block the repeal of net neutrality, and public interest groups have filed petitions in court. The publishing of the final notice on Thursday means these parties have a 10-day window during which they must refile their lawsuits.

In December, the Republican-led FCC voted to repeal Obama-era net neutrality rules, which ensure that internet service providers treat all online traffic equally. The rules prohibit companies like AT&T, Comcast and Verizon from charging customers for access to “internet fast lanes,” and also from slowing down or blocking access to certain websites or services. 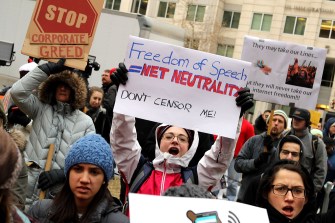 For example, let’s say Verizon starts its own streaming service. It would have many competitors. But without laws that require Verizon to treat all online traffic equally, what’s to stop it from giving its own service the fastest connection, while slowing down others?

Companies like Google, Facebook, and Twitter support the rules. But internet service providers argue that net neutrality is bad for business and that it discourages investment.

The rollback of net neutrality at the federal level might not make a difference in some states, however. The governors of New Jersey, Montana, and New York have already signed executive orders that effectively establish net neutrality principles at the state level.

It’s a somewhat ironic development. Republicans, who support states right and have opposed net neutrality, could soon find themselves in a position where states rights are working in favor of an issue they oppose. Other blue states might follow suit if the repeal of net neutrality goes forward on April 23.

“Whether it is litigation, state action, or some other mechanism that brings it about, I am sure that robust net neutrality protections will prevail with the American public.”

Related
Starts With A Bang
The sober truth about finding the Universe’s first stars
The Universe certainly formed stars, at one point, for the very first time. But we haven’t found them yet. Here’s what everyone should know.
Life
Our antidepressant drugs are affecting animals and ecosystems
A toxicologist explains the impacts of antidepressants on fish — and no, they’re not getting any happier.
The Past
Ancient migration: Bering Strait land bridge from Asia to North America was not a one-way road
Ancient humans crossed the Bering Strait land bridge from Asia into North America. But some of them went back.
Sponsored
Want to boost your happiness? Buy experiences, not material possessions
Some experiences continue to pay dividends time and time again.
High Culture
Did Paul Cézanne hide an early self-portrait underneath a 160-year-old still life?
To answer that question, we may have to figure out when the famed painter started to go bald.
Up Next
Mind & Brain
1,256 Americans describe their dreams and it’s not even a little boring
A new survey of 1,256 Americans finds out how much we dream—and have nightmares—about the same things.