Can killer whales speak human? That may depend on whether you think speaking requires the transmission of meaning, but a new study confirms that killer whales can definitely “speak” the same sounds as humans, imitating words like “hello,” “bye bye,” and “one, two.”

Sounds that humans make while speaking exist far outside the regular range that killer whales, Orcinus orca, usually make. However, killer whales have their own accents and dialects—unique sounds created only within their groups (called pods). If killer whales move pods or are displaced into a different one, the sounds they make to communicate with fellow killer whales adapt to the new environment.

This is key to their ability to mimic human speech. It means they can learn and use new sounds, and actually, depend on doing so for survival.

In the study, these whales learned to mimic words like “hello,” “bye bye,” and “one, two.” However, as co-author of the study, Josep Call cautioned, “We have no evidence that they understand what their ‘hello’ stands for.” 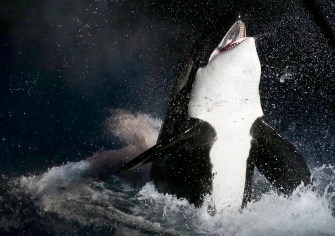 The story is available in the Proceedings of the Royal Society B, in a paper titled, Imitation of novel conspecific and human speech sounds in the killer whale (Orcinus orca). A simpler version is explained in The Guardian.

This discovery means killer whales join the relatively limited group of creatures that can mimic human speech — some birds, elephants, orangutans, bats, seals, and other cetacean species such as bottlenose dolphins and beluga whales.

Related
Starts With A Bang
The galaxy cluster that broke modified gravity
19 years ago, the Bullet Cluster provided an empirical proof for dark matter. Even today, modified gravity still can’t explain it.
Neuropsych
Psychology studies that go viral are likelier to be bogus
A new 20-year analysis of over 14,000 psychology studies finds that a study’s media coverage is negatively linked to its replicability.
The Future
How a device transmits radio waves with almost no power
Apart from the energy needed to flip the switch, no other energy is needed to transmit the information.
The Present
Radical idea: Redraw the U.S. map as a nation of city-states
While cities drive national economic growth, their political geography means they cannot effectively deal with inequality, poverty, and other socioeconomic problems.
The Learning Curve
Why do high IQ people stagnate in their careers? Emotional intelligence
Research suggests that emotional intelligence is more vital for success than IQ.
Up Next
Strange Maps
Should you wear long johns? There’s a map for that
Mapping your daily long john needs since 2011 (Canada only)