Long johns are popular in Canada, as in other cold countries. If you have to brave deep-freeze temperatures, you’ll be glad you’re wearing them. But when exactly do the benefits of long johns outweigh the trouble and discomfort of getting them on? Only Canada has a daily forecast on whether and where they should be worn.

Every weekday since 2011, an index rating and weather map has been produced by the ‘Long John Index Service of Canada’ – despite the official-sounding name, not an official government agency.

Nor is the Long John Index itself at all scientific. “It is used for entertainment and gambling purposes, and should not be confused with your preferred weather service”, the LJI website disclaims.

Yet there is method to the index, which runs on a scale from 1 to 5, 1 being the lowest point (at the freezing point of 0°C/32°F). Basically, for every 10°C the temperature drops, the index goes up by one point. And the time spent outside without long johns decreases.

So what does the Long John Index for Canada look like? Each day, two LJIs are forecast for 38 Canadian cities, one for the morning, the other for the afternoon. On 31 January – no need get your long johns out in Vancouver, Victoria, Kelowna, Penticton or St. John’s. Perfect zero scores in all five cities. 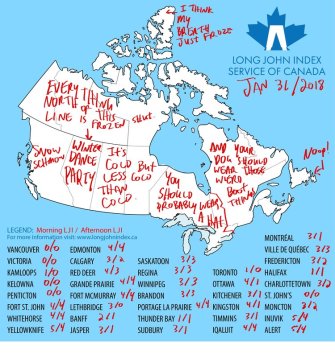 On the other end of the scale: Yellowknife, Inuvik and Alert. All three places score 5/4. No need to take them off. Fort St. John, Whitehorse, Edmonton, Grande Prairie, Portage La Prairie and Iqaluit are barely doing better (4/4). Compared to that, things sound pretty balmy in Kamloops, Toronto (both 1/0), Thunder Bay and Halifax (both 1/1).

The map helpfully adds that “everything above this line is frozen”, referring to the border that separates the Yukon and Northwest Territories from points south. Just to the east, Nunavut is “shut”. In the northernmost bit of Canada, it’s currently so cold that “I think my breath just froze”. By comparison, temperatures are verging on the pleasant in British Columbia (“snow schmow”) and Newfoundland (“noop!”).

The prairie provinces are coping: Alberta is having a “winter dance party”, and Saskatchewan and Manitoba are finding it “cold, but less cold than cold”. If you’re in Ontario, “you should probably wear a hat”, while your dogn in Québec “should wear those weird boot things”. What, don’t dogs get to wear long johns?

Related
The Learning Curve
5 Stoic quotes to help you through difficult times
“We suffer more often in the imagination than in reality.”
Starts With A Bang
The good reasons scientists are so hostile to new ideas
Many people out there, including scientists, claim to have discovered a series of game-changing revolutions. Here’s why we don’t buy it.
The Present
Climate change is altering the chemistry of wine
Smoke taint from wildfires is gross, even to wine amateurs.
13.8
Could a hidden variable explain the weirdness of quantum physics?
We have searched and searched but have never found one.
The Past
The Wild West was lawless and chaotic — and the police helped keep it that way
Lawmen and outlaws were often the same people.
Up Next
Politics & Current Affairs
Steven Pinker at Davos: excessive political correctness feeds radical ideas
Harvard’s Steven Pinker makes the case that excessive political correctness can be damaging to society and lead to the growth of radical opinions.