It may sound like science fiction, but some of us may soon be manufacturing products right in our very own homes. “Think about collectibles, customized gifts, interior decorating elements, customized headphones or earphones for cellular devices. Think about lighting fixtures—you might want to start a design shop,” says Abe Reichental, CEO of 3D Systems. “The limit is really only your imagination.”

From Invisalign braces for straightening your teeth to the bodies of two-passenger hybrid vehicles, additive manufacturing processes such as stereolithography and selective laser sintering are already being used by manufacturers to create high-end retail-quality parts and products. As these rapid prototyping technologies become more affordable and accessible, Reichental predicts that they may be a solution for bringing manufacturing jobs back to the United States.

Invented in 1986 by 3D Systems co-founder Chuck Hull, stereolithography in its simplest form uses a computer-controlled UV laser to form a complete three-dimensional object out of a vat of liquid UV-curable photopolymer resin. A stereolithography machine “prints” a three-dimensional computer file by directing its laser over the liquid photopolymer, one thin layer at a time. Exposure to the laser solidifies the pattern traced on the resin. Once a cross-section of the object is exposed, the machine lowers the hardened layer and a resin-filled blade sweeps across the cross-section, re-coating it with fresh layer of liquid. On this new liquid surface, a new layer pattern is traced, adhering to the previous layer. The final result is a complete three-dimensional object precisely resembling the original computer file.

Watch the demo video below from Shapeways to get a sense of how an additive manufacturing process works.*

Though stereolithography was originally invented to expedite the prototyping process (allowing engineers to quickly print and examine their designs), analogous manufacturing processes have since been created to produce durable, end-user products out of nylon, high-grade plastics, composites, and even metals like stainless steel and aluminum. This has allowed 3D Systems and their competitors to implement three-dimensional printing technology to create parts for everything from the U.S. Navy’s F-18 fighter jet to customized fittings for Rolls Royce cars.

“The limiting factor today is not the cost of systems and materials. It’s not the performance of the end products. It’s a lack of content,” says Reichental. “We are actively seeking ways to reduce the level of expertise that’s required to design for our machines. We’re also actively looking for ways to create exchanges and platforms for design so that we can really empower entrepreneurs to partake in this digital manufacturing revolution.” 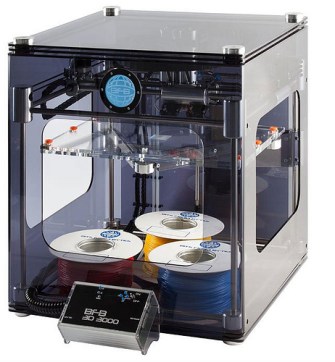 At the moment, a consumer can buy a desktop three-dimensional printer similar to the desktop 3D printer pictured above for about $1,000. These are often used by schools to design and print objects for educational projects. A higher-end professional-grade machine can cost over $60,000, and enables a consumer to produce retail-quality products like customized jewelry, hearing aids, lighting fixtures and customized doorknobs. Production materials can cost anywhere from two to eight dollars per a cubic inch. “Think about action figures—people could actually print their Second Life characters,” says Cathy Lewis, Vice President of Global Marketing at 3D Systems. “Think about when you’re at home and you lose the pieces to a puzzle or a board game. In the future you’ll just be able to make replacements.”

Given new technologies like Google Goggles, a service which enables smart phone users to search the Web using the cameras on their mobile devices, it isn’t a stretch to consider a world in which design software allows people to snap a picture of an object and then use it to recreate it using an additive manufacturing process.

“Let’s allow people to access and capture 3D data through cameras instead of trying to create it from scratch,” says Reichental. “Our vision is that we would act as a catalyst to democratize access to these tools and accelerate the use of these tools.” Copyright issues aside, one can only imagine the kind of possibilities the further improvement of rapid prototyping technology will present in the future.

The Impact on Labor Markets

Reichental predicts the cost of outsourced labor in emerging markets like China and India will continue to rise along with the growth of their middle classes. According to the U.S. Bureau of Labor Statistics, both employment and compensation costs in China increased rapidly from 2002 to 2006. Employment in China increased by more than ten percent in just four years, while compensation costs increased more than 40 percent. “We believe this is an opportunity for recreating a reverse flow, bringing manufacturing activities and jobs back to the United States,” says Reichental.

It may seem a far-fetched to predict that thousands of entrepreneurs across America will install professional-grade rapid prototyping machines in their garages and begin manufacturing custom-made products. But if the costs of rapid prototyping technology continue to decline, it’s hard to see why future generations will have to go to the store to buy anything made of solid plastic or metal. Why buy cutlery and plastic cups if you could just download the design and make it yourself? Plastic water bottles, shower curtains, simple toys, Tupperware, and all types of kitsch. The list goes on.

Climate Scientists at a Crossroads: Muddling the Differences Between Public Engagement and Deficit-Model Activism

Yesterday, the LA Times ran a feature describing separate communication efforts by the American Geophysical Union and a small band of climate scientists-turned-activists.  The effort by AGU seeks to engage […]