Yesterday, the LA Times ran a feature describing separate communication efforts by the American Geophysical Union and a small band of climate scientists-turned-activists.  The effort by AGU seeks to engage the public, journalists, and decision-makers on the nature and relevance of climate science, and is an expansion of an effort started in early 2010.  The “rapid-response” efforts by the small-group of climate activists seeks to directly confront the anticipated “anti-science” efforts of the incoming Republican Congress, in an effort as quoted at the LA Times to “aggressively engage the denialists and politicians who attack climate science and its scientists.”

The problem is that the LA Times article conflates the two initiatives, failing to distinguish between the civic education efforts of the AGU and the apparent advocacy efforts of the small-group of climate scientists. This was probably in part due to sloppy editing of the article, but it is also a mistake likely fueled by the confusing messages sent by many commentators and by scientists themselves. [See updates below.]

Using language that echoes popular blogs and books, and that offers a deficit-model view of science policy and public understanding, the small group of rapid-response scientists appears to view the climate change issue via the prism of a partisan-fueled “war,” one that pits science versus “anti-science.”  The antidote is to get the “correct scientific message” across to the public.  Here’s how Scott Mandia of Suffolk Community College describes his motivation and outlook in helping organize the group, quoted in a post at Andrew Revkin’s Dot Earth blog. I have bolded language that reflects this orientation towards deficit-model activism.

The science of climate change and even the scientists themselves are under attack from a well-orchestrated and well-oiled misinformation campaign.  The best defense against this anti-science offensive is to make sure that the correct message reaches a wide audience.  Chris Mooney & Sheril Kirshenbaum in their book Unscientific America:How Scientific Illiteracy Threatens our Futureexplain that scientists have failed to get their message across for a variety of reasons but mostly because we are not engaging the public on their turf.  After reading that book, I became a climate change evangelist with my Global Warming: Man or Myth? Website, this blog, and more recently a Facebook Fan Group called Global Warming Fact of the Day.  I have two small children and I do not like the future that I see for them or for their children in a human-driven warmer world.

Individual climate scientists have a right as citizens to engage in partisan activism, and some have argued that they even have a moral duty to be advocates. Mandia in addition should be commended for his passion and dedication to the issue. Yet scientists should also be effective advocates, avoiding strategies that are only likely to sow further polarization and discord. As I wrote at Slate magazine earlier this year, climate scientists are likely to be more effective as community-based diplomats than MSNBC-style culture warriors.

In contrast to individuals serving as advocates, national science organizations, universities, and other expert institutions have a duty instead to avoid partisan advocacy and to sponsor efforts at civic education and public engagement. These efforts should seek to not only improve technical understanding of climate science, but also understanding of the social, political, and ethical dimensions of the issue. These efforts are not designed to argue in favor of any one policy or political party, but should rather provide the motivation and opportunities for citizens to connect, plan, learn, and voice their preferences on climate change.

The difference between deficit-model activism and public engagement, unfortunately, is too often confused by how science communication is discussed at popular blogs, books, in talks, in reports, and in commentary articles.

In a series of journal articles over the past few years, I have sought to distinguish and explain the important differences and to provide clarity. At the end of this post, I have included links to these resources and to related blog posts.

In a co-authored article as part of a special issue of Frontiers in Ecology and the Environmentthat appeared this summer, I put together a table that summarizes the differences between deficit-model activism as highlighted in the passage above and public engagement approaches as pursued by AGU.  I’ve pasted the table below and you can also read a high resolution version.  Also worth checking out is a detailed and achievable plan for post-partisan public engagement on climate change that I posted last week, based on a recent commissioned white paper for the National Academies. 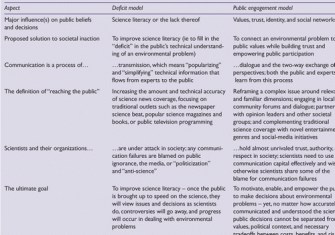 UPDATE:  Over at the AAAS Science Insider, Eli Kintisch has an additional quote from John Abraham of the University of St. Thomas, who says that the goal of the rapid-response team of independent scientists is to focus on the science and not on advocacy: “We have assembled a group of world-class climate scientists who are able to field questions on virtually any topic of climate change. Our goal is not to be a partisan group, our goal is to focus on communicating the science,” wrote Abraham in an e-mail to ScienceInsider. “Some people have wondered if this effort is in response to the elections. The answer is, categorically, no.”

But the group’s intent and focus may be undermined by the language [see above post] with which they have described the motivation behind their efforts and the nature of the problem.  It makes you wonder if many scientists–influenced by the language and metaphors used at blogs and popular books– simply have a faulty mental model relative to public communication, engagement and the role of science in policymaking.  Lacking other models to employ, they resort to the type of “war” and “anti-science” rhetoric that makes it easy to interpret their efforts as partisan and advocacy in nature.

UPDATE 2:  Earlier in the post I referred to the “civic education” efforts of AGU but as Kintisch describes the AGU effort stops short of the civic education goals I have argued for in the past, instead focusing narrowly on technical aspects of climate science.  As I wrote last week, my hope is that national science organizations will also take a broader strategy to public engagement, one that focuses on multiple dimensions of knowledge and that creates opportunities for Americans to learn, connect, plan, and voice their preferences.

Eye on 2012: A Post–Partisan Plan to Engage the Public on Climate Change

At Slate, A Need for Diplomacy in the Climate Wars

Do Scientists Have a Special Responsibility to Engage in Political Advocacy?

Reflections on AmericanAcademy‘s Report: Do Scientists Understand the Public?

A Final Salute To One Of the Finest Englishmen

The Lyric Theatre in Shaftesbury Avenue, London was packed to overflowing last night with a galaxy of stars – and ordinary footsoldiers – who had all come to pay tribute to the late […]