There is a danger in attributing human-like motivations to animal behavior. We have no way, after all, of really knowing what is going on in a non-human’s mind. Controlled experiments can sometimes strongly suggest intent, but it is difficult to be sure. Every now and then, though, there is just no escaping the obvious.

One such case is reported in a new study by a team of scientists from the Czech University of Life Sciences at the Voděradské Bučiny National Nature Reserve. The team was actually researching African swine fever protection measures until their motion-triggered camera caught something amazing.

The researchers observed a female adult wild boar coming to the quick rescue of two young boars caught in a trap. The adult boar’s response was quick, and it was smart. If its actions were not enough to convince an observer of prosocial behavior, it is difficult to interpret its signs of distress during the rescue as anything but empathy for the terrified captives.

What counts as a rescue?

According to the study, to qualify as a deliberate rescue, four things must be true: 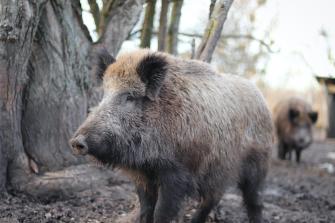 The rescue occurred just before and after midnight on the morning of January 29, 2020. The camera captured 93 photos.

The box trap had two sides held open by a wire. When the wire is tripped by an animal inside, the walls swing down into place and are held by logs that roll down from the top of the box. Essentially, the box is “locked” shut.

The researchers had set their box trap using corn as bait, and two young wild boars fell for the lure. Two hours and six minutes later, four other boars were seen wandering around the front and back of the trap for about four minutes, after which they left.

A couple of hours later, around 11 pm, a rescue party of at least eight boars led by a female adult appeared in the photos. Once underway, the entire rescue took just 29 minutes, with the first log removed after only six minutes.

The inescapable conclusion, judging by the speed of the jailbreak, is that the rescue team — particularly the lead female — was clever enough to understand what was locking the captives in. The adult female kept charging the logs until they were dislodged. (See the headline image.) Once the logs were removed, the young boars pushed through and out. 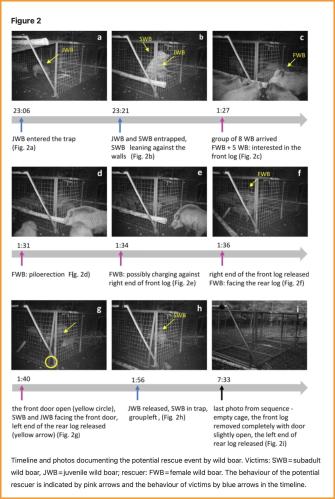 Aside from the obvious fact of the situation — that the adult boar cared enough about the victims’ welfare to effect a rescue, meeting all the requisite criteria above — a physiological clue confirms it.

When wild boars become distressed, they exhibit piloerection. Essentially, the hairs on their manes (that is, the backs of their necks) stand up on edge. The photos reveal that the adult female’s mane was clearly showing piloerection, revealing that she was viscerally distressed by the captives’ plight.

There’s an enormous evolutionary advantage for flamingos to stand on one leg, but genetics doesn’t help. Only physics explains why.
Up Next
Culture & Religion

Wisdom of Daoism: why Yin-Yang is so much more than a tattoo

Harmony and moderation make for a happier life.