Silicon Valley changed the way we communicate, work, play and catch Pokémon. Can it also transform how we approach health?

Companies such as Google, Facebook, and Apple hire the brightest minds who work long hours to bring amazing advancements to life. To keep up with the demanding lifestyle, tech workers have been looking outside the box to power themselves, trying nutrient solutions like Soylent, training their minds with philosophy, or taking ‘smart drugs‘. Now another approach to getting the most out of your body has been gaining in popularity among workaholic techies. It’s called ‘positive stress’.

The proponents of positive stress think that combining tactics like subjecting yourself to extreme temperatures, limited diets, grueling workouts and overall discomfort can help you live longer and more productively. 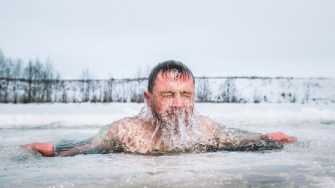 As reported by CNBC, Silicon Valley denizens like Zachary Rapp often work 18-hour days, having to get through “an inhuman amount of work.” To reduce the stress, Rapp, who co-founded three startups—the digital health company PhenoMx as well as two digital device makers—has been taking ice baths. He also complements that practice with hot yoga, occasional fasting and a special diet which restricts grains, sugar, and alcohol.

“It keeps me balanced,” Rapp said, “Like the stress is leaving my body, so I don’t feel like I’m hitting a brick wall.”

Rapp also claims to get sick just once a year and thinks positive stress can help the body to build up tolerances that make it easier to cope with everyday challenges.

Some ascribe the growing popularity of cold showers and ice baths to the Dutch extreme athlete Wim Hof. He has been dubbed “ice man” for using deep breathing to withstand severe cold. His series of workshops and a 2017 speaking tour of Silicon Valley have really spread his ideas. Joel Runyon, a triathlete who gives TED talks about the power of cold showers, thinks Hof has “converted” the tech gurus to the ideas of positive stress.

Of course, the idea of using cold showers to get healthier is not new. Ancient Romans have been known to partake of cold baths called frigidariums regularly. Such experiences were supposed to close the pores opened by the hot baths.

Whether cold showers or ice baths can actually help your health is still up for debate. Some studies have found them to have little bearing on getting sick, while others concludedthat the cold can help increase circulation, improve skin, reduce stress and help with weight loss.

To learn more about the “ice man” Wim Hof, check out this video:

Related
Neuropsych
Memory and the benefits of forgetting
Forgetfulness isn’t always a “glitch” in our memories; it can be a tool to help us make sense of the present and plan for the future.
The Learning Curve
5 Stoic quotes to help you through difficult times
“We suffer more often in the imagination than in reality.”
Starts With A Bang
The good reasons scientists are so hostile to new ideas
Many people out there, including scientists, claim to have discovered a series of game-changing revolutions. Here’s why we don’t buy it.
The Present
Climate change is altering the chemistry of wine
Smoke taint from wildfires is gross, even to wine amateurs.
13.8
Could a hidden variable explain the weirdness of quantum physics?
We have searched and searched but have never found one.
Up Next
Surprising Science
Strange new “water bear” species discovered in a parking lot in Japan
The 168th known tardigrade—a.k.a “water bear” or “moss piglet”—species can even reproduce in the lab.