Meet Macrobiotus shonaicus, the 168th species of tardigrade, or “water bear,” that has been discovered in a Japanese parking lot, of all places. 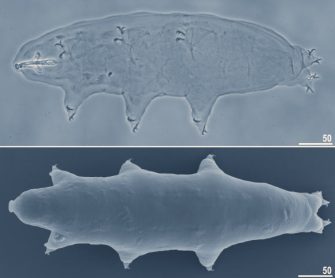 Usually about 0.5 mm in length (in inches, ~ 0.0394), tardigrades have a circular mouth with teeth and usually survive on moss and lichens (but a few of their kind are carnivores). They’re also nature’s super-creatures, with the ability to survive for decades in basically suspended animation, dried to almost dust, frozen for 30 years (even to temperatures approaching absolute zero)—that kind of thing. They can also survive at 300+ degrees F (150 degrees C) and can withstand pressures from 0 atm in space, up to 1,200 atm at the bottom of the Marianas Trench.

The researcher who discovered this particular species, Kazuharu Arakawa, regularly checks moss deposits for them, and he was surprised to find out this was a brand new species, found right in his backyard … err, parking lot.

He relayed to the magazine Live Science how he discovered this particular species. ”Most tardigrade species were described from mosses and lichens—thus any cushion of moss seems to be interesting for people working on tardigrades. It was quite surprising to find a new species around my apartment!”

He then contacted a tardigrade expert at Jagiellonian University in Poland who helped Arakawa realize he had a new species on hand. 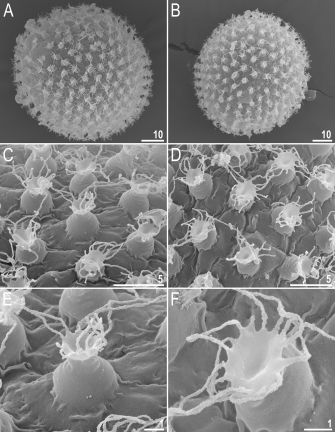 One of the features of this species is that its eggs are “crowned” in saucer-looking shapes with “noodle-ish” filaments attached. They likely help the tardigrade attach to surfaces so they don’t get washed away.

The ability to procreate in the lab is rare for tardigrades, but they found that this new species is able to do so just fine, which opens the door to even more study and experiments.

Let’s hear it for the water bears!

Related
L&D strategy
Best practices for a needs analysis [Templates included]
Conducting a thorough needs analysis requires care, curiosity, and open-mindedness.
Neuropsych
Memory and the benefits of forgetting
Forgetfulness isn’t always a “glitch” in our memories; it can be a tool to help us make sense of the present and plan for the future.
The Learning Curve
5 Stoic quotes to help you through difficult times
“We suffer more often in the imagination than in reality.”
Starts With A Bang
The good reasons scientists are so hostile to new ideas
Many people out there, including scientists, claim to have discovered a series of game-changing revolutions. Here’s why we don’t buy it.
The Present
Climate change is altering the chemistry of wine
Smoke taint from wildfires is gross, even to wine amateurs.
Up Next
Starts With A Bang
In A Quantum Universe, Even Mass Is Uncertain
In the quantum world of the unstable, even identical particles don’t have identical masses.In the microscopic world of the quantum particle, there are certain rules that are wholly unfamiliar to […]