Humans consume a lot of meat; it’s tasty, natural, and necessary. But we could probably do with eating less of it.

A study published in 2016 in the Proceedings of the National Academy of Sciences (PNAS) decided to take a look at how the world would be different if humans altered their diet and consumed less meat. How would this alter climate change and how would it benefit overall human health?

What they found is a solution that could change the world.

Health and climate change are greatly intertwined. The livestock industry poses a particularly interesting challenge on this front. It’s one of the top contributors to climate change, representing 14.5 percent of all anthropogenic greenhouse gas emissions, according to the UN. And it’s one of the tastiest industries out there — no one is giving up meat unless given a tasty alternative, like lab-grown meat. 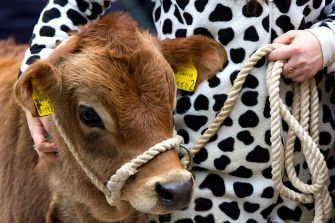 Researchers aren’t suggesting everyone goes vegan or even vegetarian. They propose a very reasonable diet: cutting meat consumption by about 50 percent and supplementing that loss in meat with a more plant-based diet. The results suggest the environment and human health would benefit greatly if we pursued this shift in lifestyle.

“Transitioning toward more plant-based diets that are in line with standard dietary guidelines could reduce global mortality by 6–10 percent and food-related greenhouse gas emissions by 29–70 percent compared with a reference scenario in 2050.”

Convincing everyone to part with even a piece of such a huge cultural tradition will be a matter of personal choice. Governments certainly aren’t going to step in and regulate.

“There is a deep reluctance to engage because of the received wisdom that it is not the place of governments or civil society to intrude into people’s lives and tell them what to eat,” said Rob Bailey, the author of a different study on meat and dairy consumption. Remember when Mayor Bloomberg tried to ban over-sized sodas in New York City? It did not go over well.

Climate change is not just an environmental crisis, it’s one that compromises public health. Much of the time this issue seems so monumental that it’s out of our hands, but that’s not the case. There’s a major part we can play in the choices we make while shopping at the grocery store. Just take a little less meat and a little more veggies, and maybe by 2050 we can make this hypothetical PNAS future a reality.

For the very first time, an AR contact lens was worn on the eye of a human subject. And it has about 30 times the pixel density of an iPhone.
Up Next
Technology & Innovation

Writers beware, an AI-written novel just made it past the first round of screening for a national literary prize in Japan. The novel this program co-authored is titled, The Day A Computer Writes A Novel.