Since the Big Bang, the universe has been spreading out in every direction, and it’s picking up speed. The space between galaxies is getting larger every day. Currently, things are drifting apart at a rate of 2.2 million kilometers per hour. Now, you’d think that the galaxies to the left and the right of ours would be moving at the same velocity. You’d be wrong.

What’s slowing us down are enormous clumps of matter. Matter is attracted to matter, which is why we see galaxies form into clusters and superclusters. Even so, that’s still not enough for the calculations astronomers have been getting. Somewhere out there in the most heavily veiled area of space lies a massive gravitational irregularity that has been dubbed the Great Attractor. Over the course of billions of years, it’s been pulling us and all the galaxies near us closer to it. 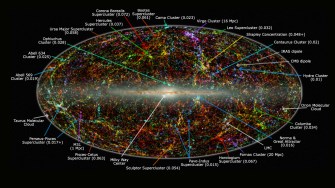 This is a panoramic view of the infrared sky showing all the galaxies outside of the Milky Way. (Credit: IPAC/Caltech, by Thomas Jarrett / Wikipedia Commons.)

The Great Attractor is thought to be at the gravitational center of the Laniakea supercluster—of which the Milky Way is but one galaxy of 100,000 others. One theory is that it’s a confluence of dark energy. Another is that it might be caused by over-density, an area of dense mass with an intense gravitational pull.

Whatever it is, it’s powerful enough to overcome normal dark energy, the force that’s believed to push galaxies on and cause them to pick up speed as they move forward. Dark energy is thought to comprise 71% of the universe. Unfortunately, scientists have no idea what it is.

How did we find the Great Attractor? 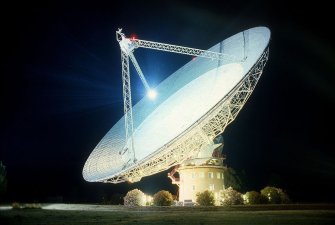 The phenomenon was discovered in the 1970s when astronomers first began making a detailed map of the Cosmic Microwave Background (CMB). This is the light residue left over from the Big Bang. It inhabits every part of the farthest reaches of our cosmos, evenly. Despite being surprising homogeneous, there is a slight temperature variation. It’s just a little warmer on one side of the Milky Way than the other, which scientists at the time couldn’t account for.

The Parkes radio telescope in New South Wales, Australia, in the ‘90s and early ‘00s, examined the sky with a sensitivity never before seen. An icon of Australian science since 1961, this radio telescope—actually a multibeam receiver, was upgraded and so, able to detect thousands of galaxies we’d otherwise be blind to. Astronomers got a good look at the galaxies close by, as well as a better sense of the makeup of the Milky Way.

Further explorations at the Parkes observatory in the mid-2000s discovered those galaxies in another area of the Milky Way, the one which contains the Great Attractor. Although previously we knew there was some anomaly out there, the lion’s share of all that data is just now being digested. As a result, the over-density’s strength and scope have only recently become apparent.

Is it really so great? 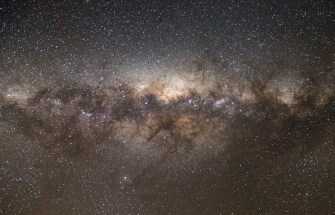 Center of the Milky Way from the New Zealand, in the southern hemisphere. Credit: Dave Young, Flickr.

Work at the Parkes observatory have reaped new discoveries of whole galaxies, galaxy clusters, and even new threads of the cosmic web. With this particular anomaly however, instead of finding out more, observations have only deepened the mystery surrounding it. The problem is, the over-density lies on the other side of the Milky Way’s disc. An enormous confluence of stars and star clusters lie between it and us, not to mention a mess of gases and space dust.

All of this obscures the light which would normally come from that direction, making us unable to observe and study it. This area has been nicknamed the Zone of Avoidance. The Great Attractor is thought to reside smack dab in the middle of it. Occasionally, something gets through. X-ray and radio astronomers are just beginning to get a look at what’s on the other side. But the picture thus far is rudimentary and murky.

Will it really destroy us? 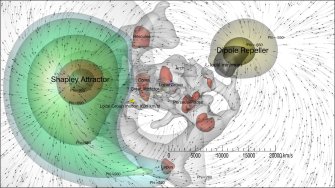 What astronomers know for sure is that our galaxy and all of those in our supercluster are headed toward the Great Attractor.  No one really knows what this might mean or if our planet is in any eventual danger. Astronomers say, it’ll take a few years before we know more about this anomaly. Some astronomers don’t consider it a threat, while others posit that all galaxies and clusters are clumping into greater and greater superclusters and that this may be how the universe ends, as part of what’s called the Big Crunch, which could theoretically be followed by another Big Bang.

Cheer up. Even if the Great Attractor doesn’t get us, more immediate concerns like climate change, a giant asteroid colliding with the Earth or a supervolcano erupting—causing volcanic winter, could potentially extinguish the human race. And if we survive any or all of those scenarios, there’s always the death of our sun in 7-8 billion years, the collapse of the Higgs boson field, or the eventual heat death of the universe. Still, the Great Attractor is perhaps the most mysterious apocalyptic scenario of them all.

To learn more about the Great Attractor, click here:

Related
13.8
Why the origin of life and the Universe itself might be forever unknowable
There might be a hard limit to our knowledge of the Universe.
Hard Science
200 years of exploring Antarctica
What we’ve learning from the world’s coldest, most forbidding, and most peaceful continent.
Sponsored
4 misleading personal finance tips
Personal finance advice is often over-simplified and fails to consider economic research or people’s unique circumstances.
Strange Maps
Europe’s stunning digital divide, in one map
Some Europeans really don’t want to use the internet.
Thinking
Bonhoeffer’s “theory of stupidity”: We have more to fear from stupid people than evil ones
Evil is easy to identify and fight against; not so with stupidity.
Up Next
Technology & Innovation
Hubble telescope celebrates 28 years in space with a dip in the dazzling Lagoon Nebula
Hubble telescope celebrates 28 years of being a space sleuth with these dazzling images of the Lagoon Nebula, 4,000 light-years away.