The range of what has been written about Pope Francis’ Encyclical “On Care for Our Common Home” speaks to how many issues the 184-page document touches on.

Conservative voices like the Heartland Institute and National Review detest the pope’s attack on free market capitalism when he complains that;

(Laudato Si’ and the NGO-ification of the Institutional Church)

Economists decry the pope’s rejection of market mechanisms as tools;

“The environment is one of those goods that cannot be adequately safeguarded or promoted by market forces.”

Ecomodernists, who argue that technology, if “applied with wisdom,” can provide a good, even great future for life on earth, criticize the pope’s views on progress and technology;

“Technology, which, linked to business interests, is presented as the only way of solving these problems, in fact proves incapable of seeing the mysterious network of relations between things and so sometimes solves one problem only to create others.”

(A Pope Against Progress by Mark Lynas, Ted Nordhaus, and Michael Shellenberger)

Classical environmentalists who predict a dystopian future love the pope’s attack on how human activity is destroying the natural world.

“Due to an ill-considered exploitation of nature, humanity runs the risk of destroying it and becoming in turn a victim of this degradation”

(The Cry of the Earth by Bill McKibben)

Some Republican presidential candidates, many of whom in the name of Catholic teaching favor absolute restrictions on abortion, are telling the pope to butt out of the climate change issue because they say that issue is political.

(Rick Santorum on Pope Francis’ Letter on Climate Change. Leave the Science to The Scientists.)

(Mr. Santorum may not have been aware that the pope was trained as a chemist.)

And the climate deniers, growing ever more shrill as the evidence of climate change persuades more and more people, do themselves no favor by calling Francis “The Red Pope” and likening him to Mao Zedong for the pope’s plea for more modest consumption;

“Humanity is called to recognize the need for changes of lifestyle, production, and consumption, in order to combat this warming or at least the human causes which produce or aggravate it.” 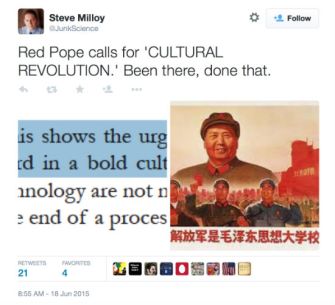 But these are only the predictable responses from those who see the Encyclical from their own perspectives and through the lenses of their own single issues. The pope reflects on many other topics in the document’s 184 pages, and his letter not only to Catholics, but also to the world deserves wider attention and richer reflection.

I’ll offer some additional reflections in a later essay (The Pope on Technology and Progress), but the main message I take from a close read is that the Encyclical, while moving, is piously naïve and unlikely to have much impact after the flutter of news coverage and commentaries dies down.

Consider the organizing theme around which the pope builds his entire case, that we share a “common home”, an idea that he invokes in the very title of the document and comes back to again and again;

I would like to enter into dialogue with all people about our common home.

Humanity still has the ability to work together in building our common home.

Whether believers or not, we are agreed today that the Earth is essentially a shared inheritance, whose fruits are meant to benefit everyone.

It cannot be emphasized enough how everything is interconnected.

Interdependence obliges us to think of one world with a common plan.

This is a dangerously flawed foundation on which to rest his case, for it ignores the inescapable truth that humans don’t think or act that way. We don’t “think globally.” We don’t care about others as much as we care about ourselves. We don’t care about the future as much as we care about the here-and-now. Humans may have the gift of reason, but mostly we are still animals and our behaviors are principally compelled by deeply ingrained biological instincts, the most powerful of which is the instinct for personal survival.

This is not immoral, or selfish, or irrational. It is simply intrinsic biological reality, as decades of research from diverse fields has made clear. Indeed throughout the Encyclical the pope himself cites evidence that the idea of a common home and a shared “inheritance, whose fruits are meant to benefit everyone,” appealing as those ideas may be spiritually, fly in the face of how we actually live our lives.

… warned that human beings frequently seem “to see no other meaning in their natural environment than what serves for immediate use and consumption.

… many problems of society are connected with today’s self-centred culture of instant gratification.

And there is this insightful passage, which in the pope’s own words, directly challenges his faith that we can somehow rise above our instincts and act in the interest of the Common Home;

The current global situation engenders a feeling of instability and uncertainty, which in turn becomes “a seedbed for collective selfishness.” When people become self-centred and self-enclosed, their greed increases. The emptier a person’s heart is, the more he or she needs things to buy, own, and consume. It becomes almost impossible to accept the limits imposed by reality. In this horizon, a genuine sense of the common good also disappears. As these attitudes become more widespread, social norms are respected only to the extent that they do not clash with personal needs.

The pope repeatedly observes these self-centered characteristics of human nature, not to accept, but to chastise them. But he cites so much evidence that we are “self-centred and self-enclosed” that it seems naïve for him to believe that simply by calling on us to dramatically change how we live our lives, by proposing that the solution is to reject “the culture of consumerism,” and make “… profound changes in lifestyles, models of production, and consumption, and the established structures of power which today govern societies,” that his moral call can trump all the instincts that make us the selfish short-sighted creatures that we are.

It is also more than a bit sanctimonious for the pope to repeatedly invoke his undoubtedly sincere concern for the poor, but at the same time to call on the world’s impoverished to “think globally.” If there are any people less able to put the greater common good and future generations ahead of themselves, it is the hundreds of millions of people desperate for food or water or shelter or safety from attack, people who literally struggle to stay alive from hour to hour and day to day.

It is also intellectually inconsistent, as many have observed, to blame human behavior for the dystopic future the pope foresees, and fail to acknowledge the role that Catholic opposition to birth control has had in the explosion of humans on the Earth contributing to that damage.

In the end, Pope Francis’ plea on behalf of life on Earth boils down to the same belief preached for centuries by the Catholic Church and most faiths (which is why other faiths are responding so positively); that we should live more modestly and care more about other beings, human and non-human. But sadly, while faith that morality can trump our animal instincts is understandable for a religious leader, it’s naïve. The core message of the Encyclical denies the truth of the instincts that really motivate most human behavior. Which is why it will probably end up as another moving document pleading with us to change our ways, that doesn’t cause much to change at all.

(In the next essay, a review of the pope on progress and technology.)

Our Solar System’s outer reaches, and what’s in them, was predicted long before the first Oort Cloud object was ever discovered.
Up Next
Culture & Religion

Meet the mischievous computer whizzes who started it all.