Sitting cheek-by-jowl in the packed press gallery at the Supreme Court on Tuesday and listening to 150 minutes of oral arguments in the historic same-sex marriage cases, I marveled at how radically the defense of “traditional marriage” has shifted in just a few short years. There was a motley crew of devout bible wranglers on the courthouse steps preaching fire and brimstone (see a couple of shots I snapped, below), and one brave soul who stood up in the courtroom yelling at the top of his lungs that the justices will “burn in Hell” if they approve the “abomination” of a right to same-sex marriage. He was quickly removed from the courtroom, but continued to make himself heard from the outside for a good 10 minutes while Solicitor General of the United States Donald Verrilli made a soaring case for treating gays and lesbians equally under the Constitution. 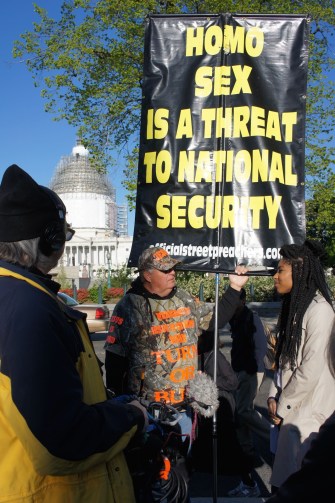 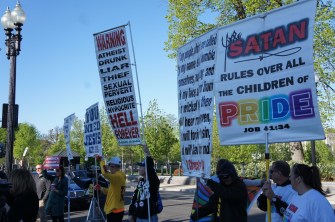 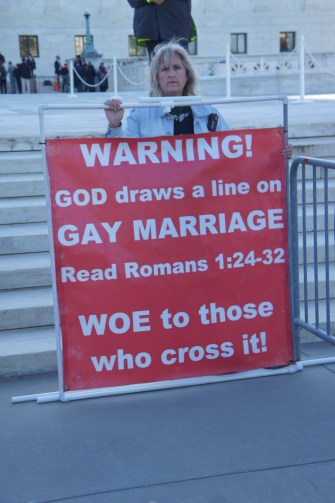 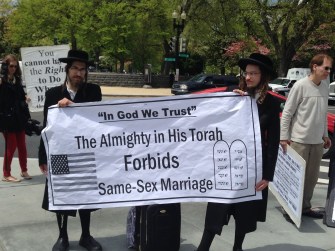 But no shred of these religious arguments — a passage from Leviticus, for example, which condemns “a man who lies with a man” — made its way into the briefs or the oral arguments. Nor did a moral argument plucked out of its religious context dominate the proceedings. There weren’t even strong intimations that gay couples make bad parents — an idea that has been thoroughly rebuked by numerous studies. This, I mused in the courtroom, seemed like progress. By the time the anti-gay-marriage argument had reached the highest court in the land, it had become more reasonable, less parochial, more amenable to reasoned exchange.

But that daisies-and-gumdrops vision quickly gave way, in my mind, to a new reality. The newest version of the argument against gay marriage might be pleasingly secular and (at least superficially) unmotivated by hatred of gays and lesbians, but it is remarkably, irredeemably, thoroughly weak.

John Bursch, the earnest-to-a-fault lawyer from Michigan who was defending the same-sex marriage bans, advanced one lonely substantive argument. As I note in my coverage of the case for The Economist this week, his point was that altering the norm of heterosexual marriage will have untold pernicious effects on society. By making marriage all about the couple’s relationship, rather than the children they intend to bear and bond with, the link between marriage and procreation will be dangerously severed. So although gay parents may be just as loving and attentive as straight ones, the new institution of marriage that will accompany a change in the law will, in the medium and long term, threaten to undermine the bonds between parents and children, gay and straight alike.

The argument is odd. As Justice Sonia Sotomayor pointed out, it is a “feeling,” entirely and absolutely speculative. One can grant that “consequences” flow from changes in societal norms without accepting the contention that allowing gays to marry would eventually ruin the relationships between parents and their kids. There have been plenty of other changes in marital relations in the past century — women working outside the home and gaining a more equal footing vis-a-vis their husbands, for example, trends Justice Ruth Bader Ginsburg noted in the hearing — and the effects have been mostly positive. Mr. Bursch could not explain any “empirical connection,” in Justice Stephen Breyer’s words, between gay marriage and an eventual loss of intimacy between parents and children.

The Michigan lawyer backed himself into an uncomfortable corner in this response to Justice Breyer: “If you de-link marriage from creating children, you would expect to have more children created outside the bonds of marriage.” So much weight falls on the “you would expect” construction here. But Mr. Bursch gave no justification for why anyone should expect this result. And he inadvertently provided an excellent refutation of his own claim in the next few minutes during a masterful Socratic takedown by Justice Elena Kagan. The idea is rather obvious: One of the very best ways to have more “children created outside the bounds marriage” is to prevent gay and lesbian parents of adopted children from marrying. This irony of his self-defeating position seems to be lost on Mr. Bursch in this exchange:

JUSTICE KAGAN: If you think about … who are the potential adoptive parents, many of them are same­-sex parents who can’t have their own children, and truly want to experience exactly the kind of bond that you’re talking about. So how does it make those children better off by preventing that from happening?

MR. BURSCH: Well, we allow someone regardless of their sexual orientation to adopt.

JUSTICE KAGAN: Yes.  But you, yourself, are saying that … the recognition of marriage helps the children, aren’t you? I mean … the whole basis of your argument is that you want children in marital households.

MR. BURSCH: Correct. We ­­want it to be the glue. That’s correct.

JUSTICE KAGAN: More adopted children and more marital households, whether same sex or other sex seems to be a good thing.

Justice Kagan concluded that “it just seems to me inexplicable given what you’ve said are your policy interests” to want to rope gay and lesbian couples out of the state’s marriage laws.

So near the end of the sleepy, anticlimactic second hour of the hearing, my mind wandered to an idea developed by John Rawls, the great 20th-century political theorist, in the 1990s. Rawls wrote that constitutional democracies are fueled by robust public discussion among free and equal citizens. The concept of “public reason” is a mode of discourse wherein people speak candidly and respectfully with each other about how their polity should be organized and about the policies it ought to adopt. One feature of public reason is the willingness, as T.M. Scanlon puts it, to give reasons that other reasonable people can’t reasonably reject. You may have religious motives for your views, and that’s fine, but staking a public claim to a position requires you to give reasons that people with different metaphysical commitments can relate to.

That’s just what we saw in Tuesday’s hearing: a case for withholding a right from gays and lesbians that is completely unmoored from its religious origins. In one sense, it’s a remarkable advance in the legal debate: a triumph of public reason. In 1986, when I was a high school sophomore, Chief Justice Warren Burger justified upholding laws criminalizing homosexual sodomy by pointing out that gay sex has been seen as an “‘infamous crime against nature,’ as an offense of ‘deeper malignity’ than rape, a heinous act ‘the very mention of which is a disgrace to human nature,’ and ‘a crime not fit to be named.'” And 29 years later, after a two-foot high stack of briefs has been written and hours of argument aired in the latest case concerning gay rights, it is clear that the old moralism no longer flies. The claim has shrunk to its speculative, illogical vanishing point. A full public hearing has exposed the case against gay marriage as an empty shell.

Fulfillment at work isn’t about finding your passion; it’s about cultivating the relationships that create a sense of belonging.
Up Next
Surprising Science

Our Faith in Optimism Vastly Overestimates Its Power

When confronting a challenge, people with an optimistic outlook persist at trying to overcome that challenge about 20 percent longer than those with less optimism.