Two months ago, Lumosity, the “brain-training company” whose ads you’ve probably seen on the web or heard on the radio or TV, was forced to pay $2 million as part of a settlement with the Federal Trade Commission (FTC), which had accused the company of baselessly touting the benefits of its product. The judgment against Lumosity in January was actually much bigger—$50 million—but the sum was reduced because the company could not afford to pay that much. Subscribers who faithfully played its memory and concentration games and were shelling out $14.95/month (or $299.95 for “lifetime” access) got some relief, and Lumosity was forced to notify auto-renewing members of the settlement and make it easier for them to cancel.

What was so problematic about the way Lumosity was pitching its services? The company “preyed on consumers’ fears about age-related cognitive decline,” the FTC charged, “suggesting their games could stave off memory loss, dementia, and even Alzheimer’s disease.” Just one problem: “Lumosity simply did not have the science to back up its ads.”

Consider the cognitive goodies Lumosity was promising in this ad, for example: 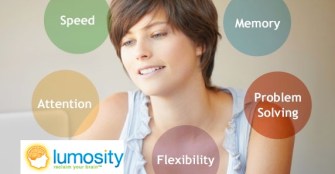 And take in the apparently non-tongue-in-cheek suggestion in this ad that sorting through online flashcards just might turn you into an NBA superstar: 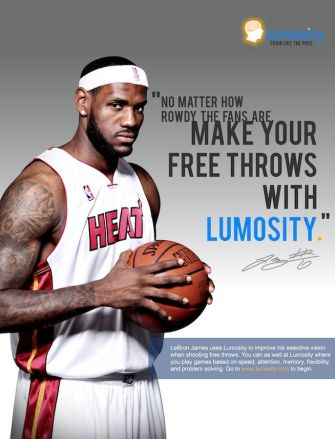 This Be Like Lebron pitch is a dead-serious version of the much lighter and more affectionate Gatorade ad featuring Michael Jordan (“Be Like Mike”) from 1992:

And for a dose of syrupy deception, listen closely to the bubbly actor playing a customer called ‘Emily” in this TV spot:

Notice Emily’s starry-eyed swoon that Lumosity is “based on neuro-science” and the narrator’s explanation that the website employs the mysterious-sounding “science of neuroplasticity” to help subscribers “build a better brain.” Don’t worry, there’s nothing Frankenstein-y going on, the spot reassures us brightly. The website will rewire your noggin “in a way that just feels like games.” Yes, games! Fun stuff! No sweat! It’s the cognitive equivalent of snacking on Twinkies dipped in whey protein to prepare for a triathalon.

There’s nothing wrong with having fun on the Internet, and we can safely stipulate that Lumosity’s challenging games are more valuable than, say, Candy Crush or Cow Evolution, two mindless pastimes that straphangers eat up during their morning commutes. But the brain-training craze that has gripped web users over the past few years should give us pause. It’s disturbing how easily people can be taken in with obviously exaggerated claims about how devoting themselves to a series of games can improve intellectual functioning. The sad irony is that the people who spend good money on these programs could in fact use something of a mental tune-up—but the lessons of rational thinking they need are nowhere to be found in the curriculum.

A Defense of Legalizing the Right to Assisted Suicide

Refusing to allow terminally ill patients the right to end their life is a cruel and inhumane relic of religious thinking.