A new study shows that Americans who voted for President Donald Trump in the 2016 election tend to report higher levels of sexual disgust, a factor psychologists think could influence how people vote.

The findings, published in the journal Evolutionary Psychology, are a surprising entry in the growing body of research on how disgust sensitivity interacts with political orientation.

The answer, according to evolutionary psychology, is deeply rooted. One key function of disgust is to help us avoid diseases by grossing us out when we’re near pathogens. That explains why almost everyone finds certain things repulsive: urine, feces, vomit. These feelings of disgust are part of our behavioral immune system, defined as a group of deeply rooted behaviors that help keep us healthy. Without this system, we might be all too willing to bite into a piece of mold-covered toast, or not wash our hands after going to the bathroom.

Research over the past two decades has shown that people who are easily disgusted are more likely to:

One common explanation in evolutionary psychology for these effects suggests high disgust sensitivity pushes people toward conservatism because the ideology is more closely aligned with pathogen avoidance than liberalism. One example is opposition to immigration:

Immigrants represent an out-group, and throughout human history contact with foreign groups increased people’s chances of catching a disease. So, the desire to avoid contact with out-groups, ugly as it may be, could be part evolved adaptation, one felt strongly by people high in disgust sensitivity.

That’s one view in the conversation about disgust and politics. But another hypothesis, one based on sexual strategies, seems to better explain the link between disgust sensitivity and conservative ideology. This hypothesis broadly argues that easily disgusted people are more likely to pursue a sexual strategy that’s long term and monogamous, as opposed to a short-term strategy with many sexual partners (and, therefore, many opportunities for contracting a disease).

The researchers suggested this fundamental attitude toward sex might be shaping conservative’s attitudes on political issues.

“Given that support of monogamy and opposition to sexual promiscuity are pillars of conservative ideology, these findings suggest a clear avenue by which disgust sensitivity may develop into a more socially conservative political orientation,” the authors of the new study wrote.

For the study, 585 participants took surveys on Amazon’s Mechanical Turk that recorded their political orientation, voting record, and disgust sensitivity, all of which was approved by the institutional review board of the University of Miami.

The participants completed two surveys to measure disgust sensitivity. One had them rate “how disgusting” they considered concepts in three areas: morals, pathogens, and sex. For morals and pathogens, participants rated how disgusting they considered “seeing some mold on old leftovers in your refrigerator” and “forging someone’s signature on a legal document.” For sex, they rated the disgustingness of things like “performing oral sex,” “watching a pornographic video,” and “bringing someone you just met back to your room to have sex.”

The results showed that sexual disgust was by far the best predictor of whether someone voted conservative.

“…sexual disgust sensitivity fully mediated all effects of the relationship between pathogen disgust sensitivity and social–political orientation, voting behavior, and party affiliation. Altogether, these results are most consistent with the sexual strategies model and sit uneasily with the pathogen-avoidance model. We found no evidence that pathogen disgust predicted any of the three outcome measures used here, independently of sexual disgust.”

The 2016 election was a unique case study for disgust sensitivity, according to the researchers, because Trump’s campaign was marked by explicit anti-immigration sentiment and pathogen-related rhetoric, like using the words “filthy, disgusting,” or saing “there was blood coming out of her wherever”. That’s why it’s surprising that sexual disgust, not pathogen or moral disgust, seemed to be the driving factor behind voting behavior, in terms of disgust sensitivity. 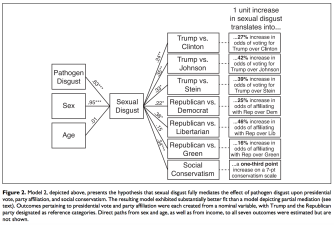 Also surprising were the results among third-party voters:

“…greater sexual disgust increased the odds of affiliating with the Republican Party rather than with the Libertarian Party and of voting for Donald Trump rather than Libertarian presidential candidate Gary Johnson (indeed, inspections of group means for each political party suggest that Libertarians report the least sensitivity to both pathogen and sexual disgust).”

Still, the researchers wrote that theirs is a broad study that didn’t ask participants about specific policy issues. They also mentioned that other recent studies seem to support the idea that pathogen-related disgust significantly impacts views on immigration, and therefore political orientation on a larger scale.

“For these reasons, we certainly would not rule out a role of pathogen avoidance in the formation of some socially conservative positions, immigration foremost among them.”

Broadly, however, the researchers say sexual disgust is influencing our political behaviors on a level we don’t yet understand.

“Whatever the influence of pathogen disgust on particular social issues might turn out to be, the current results suggest that sexual disgust can influence individual political positions strongly enough to affect two of the most crucial political outcomes in our society: the party we align with and the president we vote for.”

Related
Hard Science
Some earthquakes last for seconds, others for minutes — and a few for decades
What do you call it when the Earth shakes for three decades?
Sponsored
What childhood “money story” is shaping your financial behaviors?
Here are the signs that you inherited “money anxiety” from your parents.
The Present
The “maritime Indiana Jones” who salvages shipwrecks now wants to tow icebergs
Simple physics makes hauling vast ice chunks thousands of miles fiendishly difficult — but not impossible.
Neuropsych
Inside the brains of aging dogs
In a citizen science project, thousands of pet dogs are helping scientists to understand what happens to memory and cognition in old age.
Neuropsych
The most common source of awe might surprise you
It’s us.
Up Next
Surprising Science
Is plant protein superior to animal protein?
Choosing a diet is hard for many people. But it doesn’t have to be.