Post Traumatic Stress Disorder (PTSD) after military service went by many names before it was recognized as a legitimate condition. “Shell shock,” “combat fatigue” and “soldier’s heart” are among the more recent terms for the haunting anxiety problems that some military personnel endure after combat. The agony of PTSD is not a new phenomenon, and can be found in Ancient Egyptian and Greek writings, which document the suffering of warriors after battle. 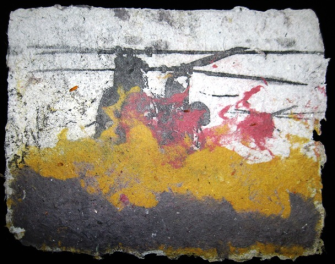 One group of artists, some of whom are veterans themselves, has developed a novel method of therapeutic treatment for veterans suffering from PTSD and other problems that relate to their military service. Through a literal deconstruction of the army uniforms of the veterans in the project, the “Combat Paper Project” hopes to provide cathartic healing and deconstruct the pain and trauma that their military service has left them with. As Drew Cameron, Co-Director of the Combat Paper Project says on their site:

The story of the fiber, the blood, sweat and tears, the months of hardship and brutal violence are held within those old uniforms. The uniforms often become inhabitants of closets or boxes in the attic. Reshaping that association of subordination, of warfare and service, into something collective and beautiful is our inspiration.

The Combat Paper Project has travelled around the world, helping veterans in the U.S., Canada and the U.K. with their psychological suffering. They shred their fatigues and mash them up into slurry, then form sheets of paper from the cotton using traditional hand papermaking techniques. They then use silkscreen printing to create beautiful and moving prints on the paper they create, mostly focusing on military imagery. 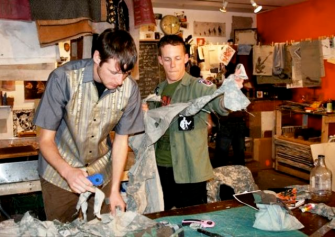 Check out their website, and donate to help a good cause.

As print sales decline and new e-platforms pop up everywhere, the future of the book has become a source of widespread speculation. In my previous post I asked: what’s the […]