The African naked mole rat (Heterocephalus glaber) looks like an octogenarian sausage with buck teeth. Mostly found in the horn of Africa, these rodents live in warrens underground, serve a ruling queen, and spend most of their days gathering seeds and edible plants, or digging elaborate tunnels with their protruding front teeth and snouts. They live dozens and sometimes hundreds together and only the queen mates and bears young. In this way, they operate more like ants or bees than mammals.

Turns out these hairless monstrosities are a scientific marvel in quite a number of ways. For instance, they’re cold-blooded. These mole rats survive much, much longer than any other rodent, around 30 years or so. The naked mole rat doesn’t experience most kinds of pain and might even help us cure cancer. They don’t develop it. When researchers tried to sow cancer within them, they proved resistant.

Perhaps the most extraordinary thing about them is, they can survive for a long time without oxygen. Now, researchers have found out why. Turns out, they borrow a biochemical process from plants, according to a recent study, published in the journal Science. Neuroscientist Thomas Park, a researcher from the University of Illinois-Chicago, told NPR that he and colleagues wanted to know how long the naked mole rat could last without oxygen. 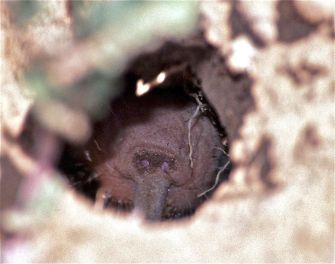 How naked mole rats survive in low oxygen environments has been a mystery, until now. By Bernard DuPont from France [CC BY-SA 2.0], via Wikimedia Commons

First they stuck four mole rats in a chamber which mimicked a low oxygen environment, one that would kill a mouse in about 15 minutes. Subjects became sluggish but were unfazed otherwise. They were in there for five hours without any trouble. This aspect of their physiology is important for their survival, as in the wild, they spend long period in tunnels where very little oxygen can be had. The reason they can do this is, they have something called “sticky hemoglobin” in their blood, which can pull more oxygen out of the air, according to Park.

Next, these same four mole rats were placed in a zero oxygen environment. Though they lost consciousness after about 30 seconds, they were able to survive for up to 18 minutes. During that time, their internal organs continued to function. Their hearts even continued to beat. Once they were brought back into normal air, the subjects revived in mere seconds and resumed life as normal. Three mole rats exposed to the same environment for 30 minutes however, perished. Seems even naked mole rats have their limits. Still, to survive as long as they did is unheard of. So how did they do it?

Most mammals need glucose—a sugar and oxygen to provide fuel to their cells. Cut off oxygen and their cells perish. But the naked mole rat can switch gears, producing and then digesting fructose, a plant sugar. Fructose doesn’t require oxygen to be utilized biologically. The biochemical process it goes through is actually quite similar to how yeast turns sugar into alcohol. 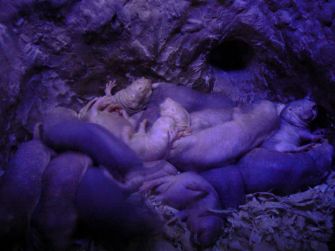 So many naked mole rats living in the same area can also suck away much of the oxygen. By Benny Mazur [CC BY 2.0], via Wikimedia Commons

Usually, in a low or no oxygen environment, the heart is the first thing to go. But here, the naked mole rat went into a sort of “suspended animation,” according to Gary Lewin. He’s a neurobiologist at the Max Delbrück Center for Molecular Medicine, in Berlin. Lewin was a co-author on the study. Special proteins and enzymes in the mole rat’s system deliver fructose to the heart, brain, and other organs, allowing it to continue consuming and using energy. Lewin believes this capability evolved because these rodents often find themselves huddled together in large groups in areas underground with low oxygen.

Lewin also believes that other animals may have this stasis capability. A study from the 1960’s for instance, shows that woodchucks can survive short stints in low oxygen environments. Another example, fish and turtles endure long months of oxygen deprivation during the winter, hibernating underneath frozen lakes. We can see such metabolic changes a little in humans as well. People who live or work in extreme conditions, such as at high altitudes or deep under the sea, have metabolisms that operate somewhat differently, so as to better accommodate a high pressure environment.

These findings may help scientists develop a way to safeguard patients who suddenly lose oxygen to key organs, such as heart attack or stroke victims, helping them to avoid brain damage while the incident takes place. First, researchers must determine where the fructose came from to begin with. Since it’s not naturally a part of the naked mole rat’s diet, it must’ve somehow been produced by their system, a process that’s so far only been observed in plants.

Related
13.8
Why the origin of life and the Universe itself might be forever unknowable
There might be a hard limit to our knowledge of the Universe.
Hard Science
200 years of exploring Antarctica
What we’ve learning from the world’s coldest, most forbidding, and most peaceful continent.
Sponsored
4 misleading personal finance tips
Personal finance advice is often over-simplified and fails to consider economic research or people’s unique circumstances.
Strange Maps
Europe’s stunning digital divide, in one map
Some Europeans really don’t want to use the internet.
Thinking
Bonhoeffer’s “theory of stupidity”: We have more to fear from stupid people than evil ones
Evil is easy to identify and fight against; not so with stupidity.
Up Next
Culture & Religion
We Are What We Watch? What the TV You Choose Says about Your Morals
A new study says some TV viewers are more moral than others. What kind of viewer are you?