Looking for some fresh real estate? Somewhere not too crowded, far away from the hustle and bustle of the big city? Well then look no further than GJ 1132b, a new planet just 39 light years away. Scientists found GJ 1132b in 2015, but only recently were they able ascertain the climate by watching how it blocked light from its host star as it passed in front of it, according to the BBC.

It might not be near a Starbucks or public transportation, but GJ 1132b is pretty close to our planet Earth (all things considered). 39 light years is about 229,320,000,000,000 (229 trillion) miles away. And while there may be an abundance of space, unfortunately the temperature on GJ’s surface is about 698ºF. That’s about 6 times hotter than the hottest temperature ever recorded on earth: 134.1ºF (in Death Valley, CA in 1913). But it is 1.4x bigger than Earth, meaning that if you can survive the heat you’ll have a ton of space on GJ to roam about, so long as you don’t melt. 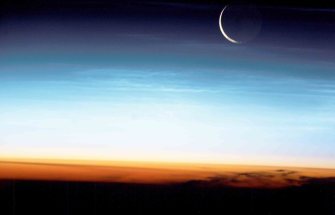 The limb of the Earth at the bottom transitioning into the orange-coloured troposphere, the lowest and most dense portion of the Earth’s atmosphere, photographed by an Expedition 7 crewmember onboard the International Space Station (ISS). The troposphere ends abruptly at the tropopause, which appears in the image as the sharp boundary between the orange- and blue- colored atmosphere. The silvery-blue noctilucent clouds extend far above the Earth’s troposphere. The sliver of the setting moon is visible at upper right. (Photo by NASA/Getty Images)

Using a telescope at the European Southern Observatory in Chile, the researchers were able to study the planet by watching how it blocked some of the light of its host star as it passed in front of it.

“It makes the star look a little bit fainter – and it’s actually a very good way of finding transiting planets – it’s how this one was found,” said Dr Southworth.

But different molecules in a planet’s atmosphere – if it has one – absorb light in different ways, allowing scientists to look for their chemical signatures when the world transits its star.

But the main draw? GJ 1132b has a visible atmosphere similar to that of Earth. Yet scientists don’t know what it’s made of, concluding that it is most likely either hot steam (think the hottest shower imaginable) or methane (the gas that makes farts smell).

So, 39 light years away there’s a hot steamy fart of a planet just waiting for us to get to it. If that doesn’t sound appealing, perhaps we should take better care of the planet we’ve got.

From politics to culture, we blame “tribalism” for humanity’s problems. This explanation is entirely wrong.
Up Next
Sex & Relationships

Forget Westworld. Disney May Soon Have Huggable Robots to Interact with Visitors.

Is Disney creating a G-Rated Westworld? Disney Enterprises recently filed a patent for a “soft body robot for physical interaction with humans.” The result may be similar to Baymax, the inflatable therapeutic robot from Disney’s Big Hero 6.