NASA has released a new report via the Office of Science and Technology Policy (OSTP) on its plans to build its asteroid detection and deflection technology over the next 10 years.

Titled the ‘National Near-Earth Object Preparedness Strategy and Action Plan’, 18 pages of what it’s working on deal with asteroids on course to encounter Earth. There are officially none yet on NASA’s radar, but new asteroids are discovered frequently that we didn’t know about previously.

The space agency has been working on this for a while, focusing on detection; here’s the increase in such objects found since just 1980. NASA also maintains a network of telescopes scanning the skies regularly for threatening NEOs (near-Earth objects). 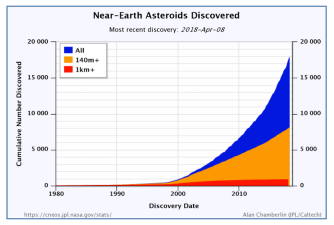 Included in the document is an illustration of what could happen if an asteroid the size of the one that hit Tunguska, Russia in 1911 could potentially do if it hit New York City. It could be devastating. 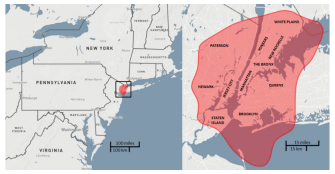 The death toll could reach millions in such a scenario. Indeed, part of the plan includes how to coordinate with the Federal Emergency Management Agency (FEMA) and other governmental and non-governmental organizations across the world who help manage catastrophes.

The picture of just what that looks like, in the time leading up to the impact and what happens immediately after, is laid out in the document as well.

In a teleconference on the 10-year plan, OSTP rep Aaron Miles made it clear that they’re not sounding the alarm but rather preparing for the remote chance that this could happen.

“Fortunately this type of destructive event is extremely rare. NASA and its partners have identified more than 95% of all asteroids that are large enough to cause a global catastrophe and none of those found pose a threat within this century.”

However, he did remind people of the Tunguska event: “110 years ago this month, an asteroid about 50 yards across entered the atmosphere and exploded over a remote part of Russia creating a blast that leveled an area of forest larger than 700 square miles.”

Included in the plan are three concepts that could be deployed if an object like this were headed for the Earth. These include:

It was made clear, however, that—despite movies to the contrary—astronauts wouldn’t risk their lives to attempt to do any of the above.

Is the Universe finite or infinite? Does it go on forever or loop back on itself? Here’s what would happen if you traveled forever.
Up Next
Technology & Innovation