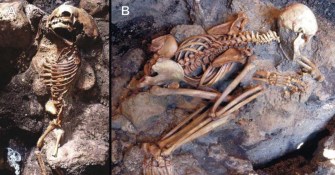 Residents of Herculaneum found in a “life-like” stance, rather than curled up, indicates near-instant death.

Imagine living next to Mount Vesuvius in the 1st century, four miles away in the ancient town of Herculaneum. And imagine not knowing that the volcano was about to erupt. What archaeologists are currently trying to piece together now is what happened next.

Hint: It’s not pretty. The possible blessing for residents of the town, however, is that what happened was quick — quicker than being cremated, by far.

Vesuvius erupts about every 2000 years. When such a volcano erupts, there are at least two phases:

From what has been found in the archaeological exploration, the second phase is what the residents of Herculaneum found in this gathering endured, as well as the surviving residents of the initial phase in Pompeii. This particular set of 300 human remains were found in 12 seaside chambers, where undoubtedly they sought shelter after seeing the initial eruption.

However, unbeknownst to the asylum seekers, the temperatures in the ash/hot gas currents can reach from 200–300 degrees °C to a whopping 500 degrees °C. What archaeologists found upon unearthing the victims were all direct evidence that they died almost instantly, rather than over time as previously theorized.

And — here’s where it gets rather macabre — the evidence strongly indicates they died from their blood boiling, skulls fracturing (and even exploding from said blood boiling). Their bodily fluids and soft tissues, the researchers say, experienced a “rapid vaporization.”

In their words, the remains they discovered “strongly suggest a widespread pattern of heat-induced hemorrhage, intracranial pressure increase and bursting, most likely to be the cause of instant death of the inhabitants in Herculaneum.”

What are dormant volcanoes good for? Copper mining

Instead of digging for metals, we could extract them from salty, subterranean water.
Hard Science

Scientists track down a puzzling early burst of oxygen on Earth.
Hard Science

A network of devices called MERMAIDs is taking seismographs where they’ve never been.
Politics & Current Affairs

Why CO2 from Volcanoes Is Definitely Not the Issue

Do volcanoes contribute a significant amount of CO2 to the atmosphere compared to humans?
Up Next
The Present

The states with golden stars on them are extra intriguing.