Over 50 dinosaur tracks were found by researchers on the Scottish Isle of Skye. The footprints date back to 174 million to 164 million years ago and help us understand the Middle Jurassic period. Not many fossil sites have been found from that time so far and the new discovery is being seen as very significant.

The study was conducted by researchers from the University of Edinburgh and the Chinese Academy of Sciences. They believe that the footprints were left by two kinds of dinosaurs. One was a long-necked sauropod, the largest animals on earth during that time. These beasts reached up to 18 meters in length, weighed over 10,000 pounds, and are considered cousins of the Brontosaurus. The other kind dinosaur that frequented the area was likely a theropod, known for sharp teeth and being related to the Tyrannosaurus Rex.

The University of Edinburg’s paleontologist Stephen Brusatte co-authored the study and thinks the key takeaway of the find is in what it tells us about dinosaur interaction: 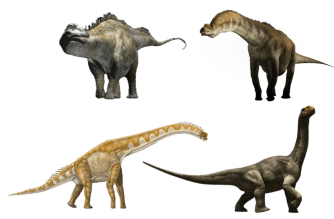 Paige dePolo, the study’s leader, explained that the study showed how sauropods were in the area much earlier than previously thought.

“This tracksite is the second discovery of sauropod footprints on Skye,” elaborated dePolo. “It was found in rocks that were slightly older than those previously found at Duntulm on the island and demonstrates the presence of sauropods in this part of the world through a longer timescale than previously known.”

The discovery is being lauded for how much it can tell us about the Middle Jurassic Period, in particular, an important time in dinosaur evolution when meat-eating tyrannosaurs and the first birds came exist. The find was made at Brothers’ Point on the north-east coast of the Island of Skye. While it is now a collection of craggy ridges and stunning rocky beaches, the area used to be subtropical in the days of the dinosaurs, with lagoons and rivers. 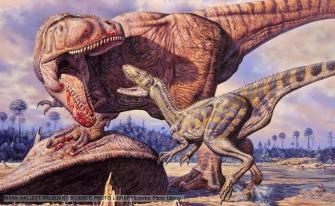 The tracks themselves were discovered by Dr. Brusatte’s graduate student Davide Foffa in 2016 while on a trip to the island. To get a closer look, the scientists used a drone to photograph and map the area.

What’s next for the researchers? They plan to explore the island for more giant footprints.

You can find their study published in the Scottish Journal of Geology.

Related
High Culture
Did Paul Cézanne hide an early self-portrait underneath a 160-year-old still life?
To answer that question, we may have to figure out when the famed painter started to go bald.
Strange Maps
Dutch government releases a genuine treasure map from WWII, sparking a hunt for the loot
X marks the spot. The Dutch town of Ommeren has been swamped by detectorists armed with shovels looking for $20-million treasure.
If money doesn’t buy happiness, you’re spending it wrong
These money experts say you can buy happiness. There are some red flags to look out for, though.
▸
7 min
—
with
Lindsay Bryan-Podvin
Thinking
Creative wisdom from Rick Rubin: embrace your inner gatekeeper
Unlock the full potential of your creativity with “holistic detachment.” This is the way of the editor.
Starts With A Bang
The path forward for astronomers and native Hawaiians
A history of injustice and the greatest natural location for ground-based telescopes have long been at odds. Here’s how the healing begins.
Up Next
Strange Maps
Grow west: the mystery of America’s migrating trees
Three-quarters of tree species common in the eastern U.S. have moved their population centres westward over the last 30 years – an effect not predicted by assumptions about global warming.