French scientists found gigantic dinosaur footprints on the roof of the Castelbouc cave the Lozère region of southern France. A new paper outlines the discovery approximately 1640 feet under ground by the paleontologist Jean-David Moreau from the University of Burgundy–Franche-Comté and his colleagues.

The footprints likely belonged to an unknown species of titanosaur and were made 166 to 168 million years ago, in the Middle Jurassic Period. Titanosaurs, a group of long-necked, lizard-like sauropods, could be found all over the world in present day Africa, the Americas, Europe, and Australia. Among titanosaurs were the largest land animals to have ever existed, like the Patagotitan, which stretched 121 feet long and weighed 138,000 pounds. 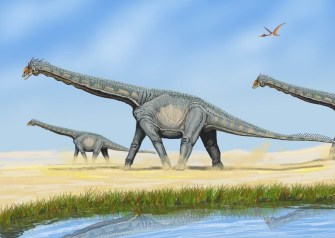 Some of the 38 tracks found in France were as large as 4 feet long. They were likely made by three dinosaurs at the time when the area was on the surface, making up a muddy shoreline along which the giant creatures traveled. Over time, the site was buried by geological processes, with the tracks becoming moldings in the roof of a cave that’s half a kilometer underground.

They were spotted as part of a caving expedition in December 2015 by the paper’s authors. To find them, the scientists had to go down a narrow labyrinth of crawl spaces that often get flooded. The tracks were in a space about 260 feet long, 66 feet wide and 33 feet high. 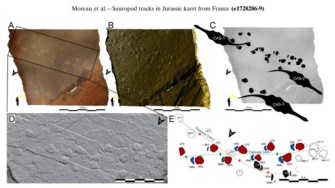 Dinosaur tracks in the ceiling of Castelbouc Cave in France.

Speaking to the French science magazine Sciences et Avenir, Jean-David Moreau explained that a caver “who was ahead of me turned to me and with the lamp of his helmet projected a grazing lighting on the ceiling which allowed to bring out the marks.”

You can read the paper “Middle Jurassic tracks of sauropod dinosaurs in a deep karst cave in France,” published in the Journal of Vertebrate Paleontology.