From the point of view of the Alaska Dispatch News, it’s clear who the victims are in this story: fishermen. And the perps are readily identified, too: Orcas, or killer whales. Animal lovers, not to mention vegetarians, might well see these labels flipped. It depends on who, according to you, gets to eat the fish in the ocean. It’s also a story of how crime — if it’s really a crime — does pay. The News spoke to several fishermen about what’s going on.

Orcas have been following the boats of longline fishermen in the Bering Sea off Alaska and making off with the halibut and black cod, or sablefish, caught by demersal longlines deployed on the ocean floor. Attached to each longline are shorter lines, called “snoods,” with baited hooks. (Floating elagic longlines that catch tuna and other surface fish have been criticized by Greenpeace.)

On the shallow Bering Sea continental shelf, where there’s plenty of halibut and black cod, and lots of orcas, things are especially intense.

Fisherman Jeff Kauffman tells the News the orcas are targeting specific boats, and captain of the Oracle Robert Hanson, who shot the video above, knows how that feels. In a letter he wrote to the North Pacific Fisheries Management Council in May 2017, he spoke of an April trip during which his boat was being “harassed non-stop” by killer whales. He says his crew lost 12,000 pounds of sellable halibut to the hungry Orcinus orcas, and wasted 4,000 gallons of fuel trying to get away from them. Another time, at the edge of the legal fishing area near the Russian border, 50 orcas showed up, and after two days he just “gave up” and returned to port.

Orcas are toothed whales that belong to the oceanic dolphin family. They’re knows as “killer whales” because they’re such effective hunters.

Harrowing: A seal learns how persistent orcas can be. (STORYFUL)

There are a number of Orca varieties, all of which are protected under the Marine Mammal Protection Act (MMPA). Southern Resident Orcas — often seen around Seattle – are considered endangered. Gulf of Alaskan waters are home to an estimated 1,475 killer whales, primarily Northern Resident Orcas.

The first reports of orcas exploiting longlines came from Japanese fishermen in the early 1950s. According to a report by National Oceanic and Atmospheric Administration fisheries biologist Dana Hanselman, though, the phenomenon became more common from 2000 to 2008. Levels of larceny have been uneven since then, Hanselman suspects, because fishermen have been switching to other kinds of fish not on an orca’s menu. Still, Jay Hebert, captain of the Aleutian Sable, tells the News that it’s now the worst he’s seen in 39 years of fishing the Bering.

Hebert, who says he’s previously caught millions of pounds of fish in the Bering, reports that he’s tried driving orcas away with sonar to no avail. Others have tried chasing them off with loud heavy metal tunes. Now Hebert says that if he sees orcas around, it’s not worth fishing: “It’s gotten completely out of control.”

Believed to be compounding the problem is that orcas are smart, social creatures who are capable of letting each other know when they’ve found a good thing, food-wise, as NOAA fisheries biologist John Moran tells the News. Hanson reports juvenile whales beginning to appear — he suspects their mothers are teaching them where to chow down. 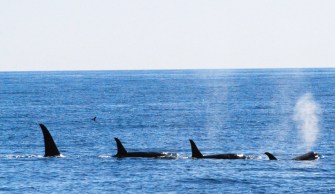 Hebert wonders if fishermen should consider moving away from longlines and to pots — wire or wood enclosures that entrap fish — if they want to keep their catch, and fisherman Buck Laukitis recently presented a proposal to this effect to the North Pacific Fisheries Management Council, saying, “You know how to catch fish, you know the fish are there, and you have the gear, you’ve done it many times, but the whales can just completely shut you down. We’re losing the battle, and that’s why we need to adapt.” His proposal passed, as well as a second one he offered suggesting further research.

Being a fisherman is a notoriously hard and dangerous life, so it’s no wonder they’re crying foul. Still, it needs to be said that since orcas have probably been around since around 11 million years ago, a plausible killer-whale defense might be, “We were here first. They’re our fish.”

Wizbang innovations capture the public’s imagination, but thoughtful, incremental development is often more valuable to those in need.

We don’t know when or how music was originally invented, but we can now track its evolution across space and time thanks to the Global Jukebox.
Starts With A Bang

We thought the Big Bang started it all. Then we realized that something else came before, and it erased everything that existed prior.
Up Next
Technology & Innovation

Is the US Paying $300 Million Too Much to Launch Rockets? Elon Musk Thinks So.

Is the government overpaying by $300 million? Elon Musk of SpaceX has long argued that there needs to be greater competition with the awarding of space launch contracts. New reports indicate that SpaceX may be $300 million less than the US government is currently paying.