It’s like a scene from a Hollywood thriller: Armed guards hired by some shady organization keeping watch dockside over ill-gotten goods. Except, in this case, the goods are alive. About 100 orca and beluga whales jammed into pens of offshore netting for sale to far-off zoos. It’s far from clear that this is legal, and the government is investigating, having been alerted to the operation along the coast of Nakhodka by Russian news organization VL.ru. 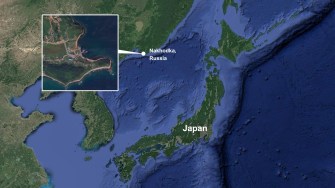 Overhead video shows just how little room to move the leviathans have been given in their pens in Srednyaya Bay. Some have been there since July.

This giant group of whales — 11 orcas and 90 belugas — are reportedly believed to have been captured by LLC Oceanarium DV, LLC Afalina, LLC Bely Kit and LLC Sochi Dolphinarium. According to VL, these four firms dominate an illegal export market for marine animals. The four companies appear to be largely unregulated.

These whales are believed to be for sale to one of China’s 60 marine parks and aquariums, with a dozen more venues reportedly under construction. With an individual orca said to be going for about $6 million on the black market, there’s money to be made in supplying all of these attractions, in China and elsewhere. There are thought to be at least 71 orcas currently in captivity — 166 orcas have been captured since 1961, and 129 of them have died since. SeaWorld still has 21 orcas; 48 have previously died at their parks.

Greenpeace Russia coordinator Oganes Targulyan tells The Telegraph, “Catching them at this tempo, we risk losing our entire orca population.” According to the organization, it is “torture” to keep such animals in enclosures such as the ones near Nakhodka.

Orcas and Beluga under threat

In the summer of 2018, the U.S. Fish and Wildlife Service highlighted the growing scarcity of orcas off the western U.S. coast. One population of killer whales there, Southern Residents, has hit a 30-year low, with just 75 individuals left. No calves have been born in the last three years, as opposed to the historical rate of 4–5 calves each year. Experts suspect both a reduction in Chinook salmon stocks, which the orcas consume, as well as the toxic chemicals the fish ingest.

Belugas are listed by the World Wildlife Federation as “near endangered.” Their habitats are under pressure from climate change, Arctic warming, oil and gas development, and human noise. According to NOAA, their population has declined by almost 75 percent since 1979, down to an estimated 328 individuals.

Whales can only be captured legally for a set of specific scientific, educational, and cultural purposes. While there is a limit to the number of orcas a fishing entity can catch per year, Targulyan says, “The capture quota now is 13 animals a year, but no one is taking into account that at least one orca is killed for every one that is caught.”

As the Russian authorities look into the captive whales, observers worry about the manner in which they’re being treated while in Nakhodka. It’s indisputable that the orcas and belugas are being held in areas far too small for them to move around in comfortably.

In any event, policing the capture of whales can be difficult. With marine parks still popular in many places, says another Greenpeace spokesperson to RIA News, “Under the guise of enlightenment and culture, dirty business is conducted on rare orcas.” One can argue that seeing these whales up close in captivity has an educational benefit that can lead to more benign policies toward these amazing creatures.

It’s incontrovertible, though, that the life led by captive whales is brutally diminished, and often cruelly difficult and short. To cause a whale to suffer for our own purposes, whatever they are, seems arrogant and ultimately indefensible. These intelligent creatures are worthy of respect: Their brains are larger than ours, and their dominion — the oceans — far greater.

The operation in Nakhodka reminds us that there remain black marketeers in the world intent on profiting from animals on the edge of extinction that the rest of us are trying desperately to protect. As a species, we still have a way to go in learning how to live in our world without destroying everything, and everyone, else in it.

Tags
Chinacompassionconservationecologyglobal issuesoceans
In this article
Chinacompassionconservationecologyglobal issuesoceans
Related
The Past
A tale of two shipwrecks: Endurance and Atlanta
At the Great Lakes Shipwreck Historical Society in Michigan, retrieving sunken vessels is the order of the day. Here’s how they do it.
Surprising Science
Glow-in-the-dark milky seas of maritime lore really exist – satellite proves it
To date, only one research vessel has ever encountered a milky sea.
Life
The secret to how scorpions, spiders, and ants puncture tough skin
These animals to grow scalpel-sharp and precisely shaped tools that are resistant to breaking.
The Present
Rare earth war: can the U.S. even compete with China?
China’s dominance of the rare earth metal industry is part of its overall geopolitical strategy.
Life
Nightmarishly large bird-eating centipedes are propping up a whole island ecosystem
These enormous centipedes are straight out of science fiction.
Up Next
The Present
Fall is a bad time to hold elections. Here’s why.
Millions of Americans didn’t vote during the midterms — excuses there are many. Some are valid.