New York is a filthy city. The air pollution caused by cars, trains and buses is a big problem. Especially for the city’s 1+ million cyclists.

Researchers at Columbia University are outfitting 30 volunteer cyclists with “state-of-the-art personal monitoring devices” in order to learn exactly how air pollution affects them, National Geographic reports. The cyclists will wear “a skintight biometric shirt, a mesh vest stocked with air pollution monitors, a location tracking system that liaises with smartphone GPS software, and a blood pressure monitor,” National Geography continues. All of that gear will help the research team learn exactly where a rider inhales pollution, and how their heart and lungs respond to it over the course of a few years.

“We’re really trying to quantify the health impacts of commuting by bicycle in a dense urban setting,” said Darby Jack, environmental health scientist at Columbia, in a statement.

NYC health officials estimate that fine particulate matter (known as PM2.5) contributes to nearly 2,000 premature deaths and more than 6,000 hospital visits per year. Those particles are largely black carbon, but the ones that spew out of tailpipes also have nitrogen oxides and polycyclic aromatic hydrocarbons in them which are harmful. All of those particles are inhaled into our lungs, accumulating and causing damage. “Research has shown that long-term exposure to pollutants increases the risk of heart and lung disease, and short-term exposure can trigger heart attacks,” National Geographic reports. 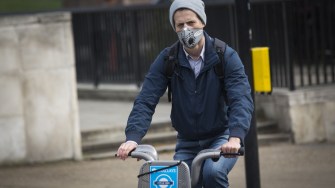 An earlier 2011 Canadian study in Environmental Health Perspectives confirmed that finding. The study followed 42 cyclists in Ottawa, Ontario during their heaviest commute times over 5 months. Researchers found that the, “cyclists had heart irregularities in the hours after their exposure to a variety of air pollutants on busy roads.”

Those effects are worsened by the cyclist’s proximity to the tailpipe. “The closer you are to the source of the fresh exhaust, the worse it is,” said Patrick Ryan, environmental epidemiologist at the University of Cincinnati, in a piece for Environmental Health News. At the opening of the tailpipe the particles are small enough to lodge deep in the lungs, “triggering heart attacks and hospitalizations from lung diseases such as asthma. Tiny particles can also cross the blood-brain barrier, potentially harming the nervous system,” Ryan explained. The farther a cyclist is, the more likely those particles are to clump together and become too large to deeply penetrate the lungs.

All that said, there are precautions you can take. Remember: not every single part of NYC has the same amount of background pollution. This isn’t L.A.; you’re not riding through a cloud of smog. Mix up your route. Stay in the designated bike lane, away from tailpipe exhaust. You can even wear a mask to minimize the amount of particles you inhale (and look badass while doing it). Ultimately, the Columbia team hopes to use their research to create a smartphone app that will help cyclists optimize their routes to avoid pollution.

Still, think twice about your next Citibike path. You might want to head straight for the park. 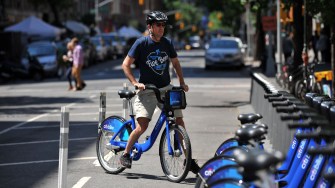 A man returns his Citi Bike bicycle to a station near Union Square as the bike sharing system is launched May 27, 2013 in New York. About 330 stations in Manhattan and Brooklyn will have thousands of bicycles for rent. (STAN HONDA/AFP/Getty Images)
—
Related
Neuropsych

Cats know more than they let on.
Up Next
Surprising Science

Someday a Doctor May Prescribe a Virus to Restore Your Health