Europe and America are very different, yet close enough in size to fit each other’s clothes. Think Eddie Murphy and Dan Aykroyd in Trading Places. As in that movie, the main effect of transatlantic transvestism is comedy. With a sprinkling of insight.

A rough equivalence between Europe and America is often assumed, but more easily proclaimed than verified. Question one: are we comparing entire continents (North America and Europe) or more geographically limited political entities (the United States and the European Union)? And are we talking population size or economic output?

Let’s not even get into geographic area—there, the comparison falls entirely flat. North America is more than twice the size of Europe. Ditto for the US vs the EU (1).

Absolute population figures are less open to debate than relative prosperity, and that’s what these two maps focus on. So, what if you transported North America’s population to Europe? 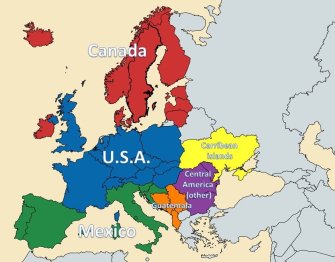 The U.S.A. would be the dominant power on the continent. Its population is big enough to singlehandedly replace those of the UK and France (65 million each), the Low Countries (28 million combined), Germany (82 million), Switzerland and Austria (8.5 million each), Hungary (10 million), the Czech Republic (11 million), Slovakia (5.5 million) and Poland (38 million).

Mexico too would be a European power to be reckoned with. Its population (122 million) fills two of the EU’s Big Five countries (3)—Spain (46 million) and Italy (60 million)—plus Portugal (10 million), Slovenia (2 million) and Croatia (4 million).

Surely by design rather than accident, European Mexico is located south of the U.S. and European Canada to its north. As on their own continent, the Canadians occupy the sparsely populated north—’Candinavia’. And that includes not just the five Nordic countries: Denmark (6 million), Sweden (10 million), Norway (5 million), Finland (5 million) and Iceland (1/3 million), but also the three Baltic ones: Lithuania (3 million), Latvia (2 million) and Estonia (1 million). And because that still falls short of the total Canadian population: also the Republic of Ireland (5 million).

And the Cubans, Jamaicans and other Caribbeans get transported off their tropical islands and herded into Ukraine (43 million). 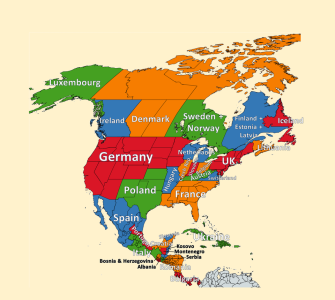 Germany on its own fills 15 states, more than any other European country, and enough to occupy a triangle of western territory that stretches from San Diego to Seattle and Duluth.

Area-wise, Poland is small enough to fit in Texas. But there are enough Poles to fill the Lone Star state (28 million), plus New Mexico (2 million), Oklahoma (4 million) and Kansas (3 million).

Québec (8 million) requires the combined populations of Finland, Estonia and Latvia. Sweden and Norway jointly replace Ontario (13 million) and Manitoba (1 million). And Denmark, finally, fills out the two remaining prairie provinces, Saskatchewan (1 million) and Alberta (4 million), plus the three territories to the north: Yukon, Northwest and Nunavut (together just over 100,000).

Things get a bit messy south of the border. Spain, Italy and Portugal make up the sparsely populated north and densely populated centre of Mexico. Into the southern bit are crammed Croatia and Slovenia (on the Yucatan peninsula), Bosnia, Albania, Serbia and Montenegro.

While not all population comparisons are a good fit, some are interesting eye-openers. For Americans, the fact that the state of Alaska and the Grand Duchy of Luxembourg have similar population sizes, for example. And for Europeans, the fact that Guatemala is the people superpower of Central America, representing a third of the region’s total population.

But for the most part, these maps serve as examples of comic transvestism, dropping familiar toponyms in strange surroundings, or vice versa. If previous entries on this blog may serve to illustrate the point, the transvestism trope is a fairly popular one. See for example #18 and #131.

(2) The Gini index is a scale representing income distribution, from 0 (perfect equality) to 100 (perfect inequality). The country with the highest coefficient is Lesotho (63.2), while Finland has the lowest (21.5).

Related
Neuropsych
Daily caffeine intake temporarily alters your brain structure
Compared to people who took a placebo, the brains of those who took caffeine pills had a temporarily smaller gray matter volume.
Thinking
Why you should laugh at yourself, according to Seneca and Nietzsche
“It is more human to laugh at life than to lament it.”
Hard Science
The violence of the Tonga eruption is a wake-up call to watch other submarine volcanoes
Out of sight, but not out of mind.
The Present
How circular economics can make us happier and less stressed
Entrenched business wisdom says that community-led economic systems are pure fantasy. Douglas Rushkoff disagrees.
The Learning Curve
The art of asking the right questions
The right questions are those sparked from the joy of discovery.
Up Next
Leadership
Procrastinating? Use These Jedi Mind Tricks to Meet Your Goals
Entrepreneur, investor and podcast king Tim Ferriss addresses an issue that everyone faces: procrastination. Ferriss shares some of the insights he gleaned from interviews with world-class performers and leaders for […]